Have a cup of coffee, and scan these posts from Ace's "Morning Report 11/22/17." If these don't get you going, maybe the coffee will:

The revelation could be a breakthrough for House Republicans, who are exploring whether Fusion GPS used the dossier, which was later criticized for having inaccurate information on Trump, to feed anti-Trump stories to the press during and after the presidential campaign. The three journalists who were paid by Fusion GPS are known to have reported on "Russia issues relevant to [the committee's] investigation," the House Intelligence Committee said in a court filing.

But the recipients' names, the amounts, and purposes of those payments were either redacted from the documents that Fusion GPS filed to the U.S. District Court for the District of Columbia or were not disclosed.

What, journolists being paid to plant opposition research on Republicans? I thought they did that for free! 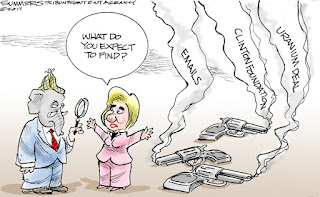 Russia Scandal Just Got Much Worse... For Hillary and Obama


. . .Now a cache of documents 5,000 pages long, which were reviewed by The Hill, sheds new and more troubling light on this story.

The documents detail work done by undercover informant Douglas Campbell, who was paid nearly $200,000 for his cooperation with the FBI while he was working as a lobbyist on behalf of a Russian company. The Justice Department had previously barred Campbell from telling anyone about his work, a gag order it lifted only after the initial Hill story ran.

Among the revelations contained in these documents:

It's important to note that all this transpired while Obama was embarking on his ill-fated Russian "reset" — in which he tried to make nice with Russia, and during which his administration not only approved the Uranium One sale but made other rulings favorable to Russian energy interests.