I'll Have Fries With That


According to British researchers, droplets of oil from deep fat friers are measurably contributing to a vast, cooling cloud over big cities, helping to mitigate the damaged caused by global warming; though more research is required to confirm this effect.


Deep fat fryers may help form cooling clouds
By Matt McGrath
Environment correspondent
23 November 2017
Fatty acids released into the air from cooking may contribute to the formation of clouds that cool the climate, say scientists.
Fatty acid molecules comprise about 10% of fine particulates over London, and such particles help seed clouds.
But researchers dismiss the idea that cooking fats could be used as a geo-engineering tool to reduce warming.
…
Using ultrasonic levitation to hold individual droplets of brine and oleic acid in position, the research team was able to make them float so they could analyse them with a laser beam and X-rays.
The X-rays proved crucial in revealing the inner structure.
“We found these drops could form these self-assembled phases which means these molecules can stay much longer in the atmosphere,” said lead author Dr Christian Pfrang, from the University of Reading.
“These self-assembled structures are highly viscous so instead of having a water droplet you have something that behaves much more like honey, so processes inside the droplet will slow down,” he told BBC News.
“They are resistant to oxidation so they stay around longer, so cloud formation will be easier.”
…
“If it does have an impact, it is likely to be a cooling one,” said Dr Pfrang.
“And the extent urgently needs further research.”
Read more: http://www.bbc.com/news/science-environment-42081892

All these years food NAZIs have been persecuting lovers of deep fried food, they were ignoring our selfless contribution to saving the planet from climate change.

Looks pretty sketchy to me. But the next time someone accosts you about your carbon footprint, offer them some fries to go with it.

UPDATE: Suitably illustrated by todays  "If All You See…" at Pirates Cove. 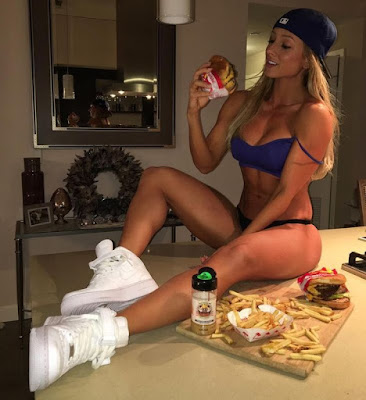 Look, the cooling from the fries offsets the global warming caused by growing the beef!

Wombat-socho has "Rule 5 Sunday: The Treasury Secretary’s Wife" ready on time. Linked by Evi L. BloggerLady in "Priscilla Presley.",  "Should the song "Baby, It's Cold Outside" be banned?" and "Iron Bowl 2017".