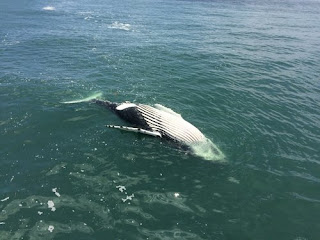 Marine scientists are using forensics to found out what killed a young humpback whale, found floating just off Lynnhaven Beach in Virginia.

The Virginia Aquarium and Marine Science Center got multiple calls Sunday morning from residents at a senior condominium complex, who could see the whale floating in the water from their windows. According to Matthew Klepeisz, Aquarium spokesman, a volunteer from the Aquarium's Stranding Response Program went to the scene immediately, with staff quickly following, but the whale was already dead.

The whale was a female, and scientists estimate she was about 30 feet long and weighed six tons. She had been sighted and tagged alive and well by researchers in the area last year. She is (sic)

Aquarium staff were able to bring the whale's body to shore for a forensic necropsy, an animal autopsy, to determine if the whale suffered an injury or trauma to cause its death.

Susan Barco, research coordinator for the Virginia Aquarium's Research and Conservation Division, explains that staff is going over the whale's body looking for wounds or legions, and peeling back the whale's skin and blubber to check for possible bruising. Some injuries might not show up on the surface; for example, if a whale were hit by the hull of a boat. Scientists will be able to make observations based on what they saw in the necropsy, but tissue samples are also being sent to a veterinary pathologist for testing, and those results could take weeks or months.

We had a rash of dead whales in the past couple of years, and the majority of them turned out to be ship strikes. Apparently juvenile whales aren't very smart.

No word if they plan to blow up the remains of the whale after they are through with the autopsy.