Getting the Lead Out of Eagles

Bald eagles are dying from lead in hunting, fishing products: 'This is starting to be an epidemic'

. . . The Pennsylvania Game Commission responsibly issued a news release last month under the heading, “Lead poisoning in Pennsylvania bald eagles on the rise.”

In the past year alone, 12 bald eagles have been treated by licensed wildlife rehabilitators around the state with confirmed cases of lead poisoning. Only one of them survived.

One of the dead was a 30-year-old eagle that was one of the first brought here from Saskatchewan, Canada, to launch Pennsylvania’s riproaringly successful eagle restoration effort.

Aside from the poisoned eagles that have died in the hands of licensed rehabbers, the Game Commission has performed necropsies and tested for lead on 202 dead eagles since 2006. An unsettling 30 percent have had severe levels of lead.

That's quite a lot. I note that this article is from Pennsylvania where hunting with a rifle, which causes the kind of splatter seen on the right, is common. In most of Maryland, except for a couple of counties, deer hunting with rifles is forbidden, and shotguns with large buckshot and rifled slugs, which rarely fragment, are used instead.


Most dead birds are never found.

“Certainly, we do see some cases that coincide with big-game hunting in the fall,” says Dr. Justin Brown, the Game Commission’s wildlife veterinarian.

But lead-poisoned eagles also are showing up at other times of the year. Where is the lead coming from?

Lead from fishing sinkers or lures is one possibility. More likely, though, they ate the bodies of varmints, groundhogs or upland game birds and animals that were shot with shotgun pellets or rifle bullets and left exposed. 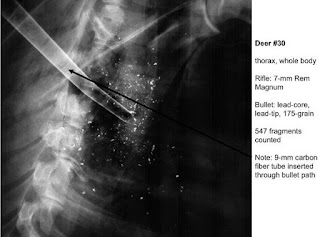 The vast majority of the lead that I lose fishing (and God knows I've lost some lead) is in half ounce or greater lumps, with huge hooks embedded. The eagle that swallows one of those has more immediate problems than lead poisoning. They were also mostly lost in water more than 10 feet deep, well out of the range of most eagles.


But an unsettling number of dead eagles are showing up right after deer-hunting seasons.

Studies have shown that lead bullets on impact throw out tiny fragments.  As much as 30 to 40 percent of a lead bullet can remain in the animal after the bullet passes through and the tiny fragments can be pushed into tissue up to 18 inches from impact, the Game Commission release notes.


Being part of the solution involves switching to lead-free ammo and fishing gear. Or, at least not leaving carcasses of animals in the open, and burying gut piles or covering them with leaves and sticks.

Demand for lead-free bullets — copper or copper alloys — is growing. Ballistic tests show they perform well, and are more likely to pass through an animal than lead bullets, increasing stopping power.

Clearly written by a typical gun illiterate journalist. The idea of a bullet is to transfer the energy of the gun powder into tissue damage.  A bullet that passes through has wasted energy. Hunting rounds are carefully calibrated to do the maximum damage in a typical kill shot. And this is the reason that the laws of war outlaw dum-dum (fragmenting) bullets.

The cost of the alloy is of little consequence, but the idea is that high density is ideal from a ballistic standpoint. Lead is easy to work and cast, and is the most dense metal commonly available. The military uses denser metals like tungsten and depleted uranium of certain purposes. The density of copper is 8.9 g/cc, the density of lead is 11.3, the density of uranium is 18.8, and tungsten 19.6. Osmium is the heaviest, at 22.6, but too expensive for throwing down range.