Reason #5778 That Trump Was Elected

This one hits a little too close to home to resist: Winning: grant applications for ‘climate change’ research are down 40%


Scientists appear to be self-censoring by omitting the term “climate change” in public grant summaries.

An NPR analysis of grants awarded by the National Science Foundation found a steadily decreasing number with the phrase “climate change” in the title or summary, resulting in a sharp drop in the term’s use in 2017. At the same time, the use of alternative terms such as “extreme weather” appears to be rising slightly. 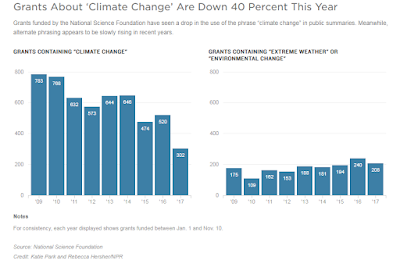 The change in language appears to be driven in part by the Trump administration’s open hostility to the topic of climate change. Earlier this year, President Trump pulled the U.S. out of the Paris climate accord, and the President’s 2018 budget proposal singled out climate change research programs for elimination.

Meanwhile, the Environmental Protection Agency has been systematically removing references to climate change from its official website. Both the EPA’s leader, Scott Pruitt, and Secretary of Energy Rick Perry have said they do not accept the scientific consensus that humans are causing the planet to get warmer.

As a result, many scientists find themselves in an uncomfortable position. They are caught between environmental advocates looking to recruit allies and right-wing activists who demonize researchers and denigrate their work.

“In the scientific community, we’re very cautious people,” says Katharine Hayhoe, the director of the Climate Science Center at Texas Tech. “We tend to be quite averse to notoriety and conflict, so I absolutely have seen self-censorship among my colleagues. [They’ll say] ‘Well, maybe I shouldn’t say it that way, because whatever funding organization or politician or agency won’t appreciate it.'”

While this years drop looks particularly steep, the trend had been dropping for years, suggesting that many scientists had already seen that the field was saturated with workers, and that there was very little in the way of scraps for the new guys.

I predict that in 10 years global warming research will be about as popular as acid-rain research, and a new cause de jour will have arisen that demands the same solution, handing control over the economy to the government bureaucrats and the academics that justify them.

Linked at Pirate's Cove in the weekly "Sorta Blogless Sunday Pinup."
Posted by Fritz at 9:03 AM