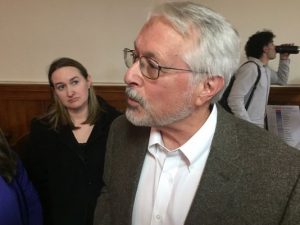 He was protecting mother earth, Gaia. Via Great Falls Tribune:


Leonard Higgins, charged with tampering with an oil pipeline in Montana last year following a four-state climate change demonstration, was found guilty Wednesday by a Chouteau County jury of trespassing and criminal mischief.
The jury, which got the case at 11:15 a.m., returned an hour later with the verdict, which also included the conclusion that Higgins caused more than $1,500 in damage.
District Judge Daniel Boucher set sentencing for Jan. 2.
Following the verdict, Higgins, of Portland, said he was disappointed Boucher did not allow his defense team to present a so-called “necessity” defense in which he would have argued he committed a lesser harm because of an imminent greater harm, in this case climate change.
Had that climate change defense been allowed, Higgins said, the outcome may have been different.
“It was really frustrating not to be able to talk about climate in the courthouse,” Higgins said.
The charges stemmed from Higgins turning off an oil pipeline valve in 2016 located north of the Missouri River in Chouteau County 75 miles northeast of Great Falls as part of a coordinated, four-state effort to raise awareness about climate change.
His trial began Tuesday and the case was given to jurors for deliberation late Wednesday morning.
“This is not about climate change,” Chouteau County Attorney Steven Gannon told jurors during closing arguments.[…]
Higgins, 65, dressed in a sports coat and collared shirt, looked more like a college professor or grandpa than an “eco-terrorist,” as one oil and gas group called him following the Oct. 11, 2016 incident.
When he testified Wednesday morning, he still managed to discuss climate change in between objections.
e described himself as a church-going family man whose roots are in agriculture and he recalled picking beans growing up in Oregon.
Later in life, he got sucked into pursuing the American Dream, he said.
He grew up in Corvallis, Ore., but now lives in Portland.

Corvallis? That explains it.


Then, after soul-searching following his mother’s death and retirement in 2010, he began to consider more serious issues, including climate change.
It is his responsibility to stand up and do what is right, he said.
“Sometimes what’s right isn’t necessarily what’s legal,” Higgins said. “It was a really hard conclusion to come to.”
He read a report by a climate scientist that spurred him to action.
“In short it explains both why we have global warning, what the science is behind that and what will happen to not so much me but my kids and grandkids if we don’t do something about it,” Higgins said.

This is probably not the scientist he listened to:

So, I haven't heard what caused the recent leak of 5,000 barrels of oil from the Keystone pipeline (Not the Keystone XL, which still hasn't been finished). My guess is that the press is hiding something.
Posted by Fritz at 10:51 AM