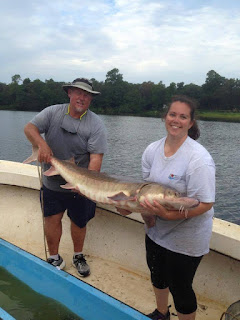 In the James River south of Richmond, endangered Atlantic sturgeon have become so common that observant spring and fall boaters are nearly guaranteed to see one breach. It’s hard to miss — a 6– or 7-foot fish exploding out of the water, as if shot from a cannon, wiggling for a split second in midair, then belly-flopping back into the river with a theatrical splash.

Long-lived and enormous — in its 60-year lifespan it can grow to 14 feet and weigh as much as 800 pounds — the Atlantic sturgeon was harvested to the brink of extinction in the late 1800s. But after a century of marginal existence, this prehistoric-looking fish, with its flat snout and rows of bony plates covering its back, is staging a steady but still fragile comeback in the Chesapeake Bay. 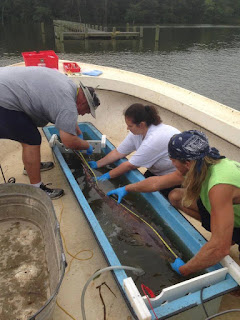 The sturgeon’s increased presence could complicate matters for industrial facilities that draw water from that same stretch of river. In one case, it already has.

After finding two dead sturgeon larvae and one adult in its water intake system in the fall of 2015, Dominion Virginia Power’s Chesterfield Power Station began seeking an “incidental take” permit from the National Marine Fisheries Service, which would allow the company to continue operating despite a potential impact to the endangered fish. In its application for the permit, Dominion estimated that up to 846 sturgeon larvae and maybe two adult fish per year could be trapped or killed in the intakes over the next decade. 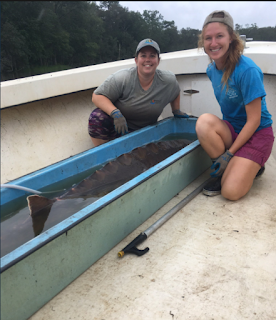 The fisheries service, part of the National Oceanic and Atmospheric Administration, will determine in the coming months whether to grant Dominion’s Chesterfield plant a federal permit under an Endangered Species Act provision that allows private entities to “take” a given number of an endangered or threatened species in the process of conducting otherwise lawful operations.

The sturgeon was added to the federal endangered species list in 2012. And this August, NOAA designated several areas in the Bay as critical habitat for the species, including the James River from above Richmond all the way to the Chesapeake. The designation does not impose any new restrictions on fishing, but it requires federal agencies to give additional scrutiny to the habitat impacts of government projects or permit requests.

Power plants that use water for cooling use a lot of water. Ask me how I know. Invariably, some fish death occurs; either fish that died naturally  get sucked into the intakes, or fish get into the intakes and are killed. But three fish isn't an indication of much of a problem.
Posted by Fritz at 6:00 PM