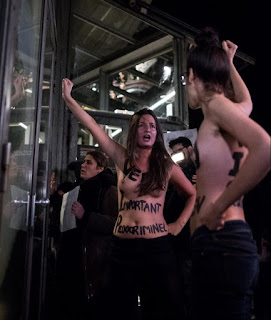 Hoping to get some mileage from the ongoing Hollywood controversy, the bare-chested babes of Femen have decided to pay attention to that fugitive from the US convicted of sodomizing a 13 year old actress: Women activists stage topless protest at Roman Polanski event as new rape allegations reported

Around 80 protesters outside the Cinémathèque Française, which is showcasing Polanski’s films next month, banged on windows and carried placards with slogans such as, ‘If rape is an art, give Polanski all the (French movie award) Cesars’.

A few members of the Femen group exposed their breasts and shouted ‘no honours for rapists’ in the presence of Polanski before security pushed them outside. 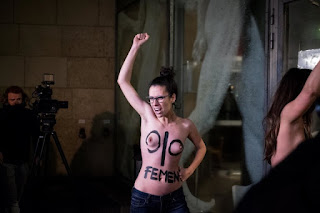 These are political tits. They don't count.


Polanski, who had entered the building through a back entrance, was set to present his new movie ‘Based on a True Story’ at the event.

Earlier this month, Swiss prosecutors said former German actress and model Renate Langer had told authorities that Polanski raped her at his mountain chalet in 1972 when she was 15 years old. Langer is one of four women who have publicly accused Polanski, 84, of sexually assaulting them when they were teenagers.

In the past, I have said that I am for whatever FEMEN is against, just to keep their protests going, but supporting Polanski might be a bit too far.

Wombat-socho has "Rule 5 Sunday: Whatever Happened To…" up and running.
Posted by Fritz at 4:29 PM