Trump Loses His Head Over Clinton.com

Not a huge harvest today. A tid-bit from Judicial Watch on Cheryl Mills deposition: Mills won't even vouch for her own honesty:

CAN’T RECALL — “Mull answered questions for more than 3 hours Friday at a deposition attended by eight lawyers for the government and Judicial Watch, days after deposition appearances by former Clinton chief of staff Cheryl Mills and Lewis A. Lukens, a former administrative official.

Mull said he not recall the communication, or the circumstances behind it.

‘So you don’t recall why you wrote this sentence?’ Judicial Watch lawyer Michael Bekesha asked.

Hillary’s aide is so evasive that she can’t even clearly vouch for her own honesty — “She can’t, or won’t, make a direct statement even about her own honesty. “Are there any reasons why you would not be able to answer truthfully here today?” asks the Judicial Watch attorney. “Not that I know of,” Ms. Mills responds, suggesting that there may be reasons she’s lying, but that she probably won’t recall them until later.”… http://on.wsj.com/1U1jsJL

Yes, Virginia Hillary, the FBI’s Investigation Is Criminal. But she's done an excellent job of persuading the democrat hacks with press cards to portray it otherwise. God know they wouldn't have thought it up by themselves. Instapundit hits a double with this tweet: So What Difference Does It Make?


Do you know why Donald Trump is defying the odds, defying the predictions of doom and defeat? Yes, by the time this runs, the people gleefully thinking that the tempest in the margarita glass that is the whole Trump U judge thing will FINALLY BRING DONALD DOWN! are going to realize, once again, that nothing matters.

No one cares. LOL.

Someone else came up with the “Nothing matters. LOL” formulation to describe this election year, and he deserves a nice shiny quarter, unless he is a Hillary Clinton fan in which case someone should smack him for supporting that cancer on our Constitution.
. . .
Hillary’s formulation of “Nothing matters, no one cares” is just a little different. For her, it’s “What difference, at this point, does it make?” You know, that comment she made when some congressmen – not including any Democrats – tried to hold her to account for getting four Americans killed and lying to not only their families’ faces but to our faces about it.

And the people who aren’t in Hillary’s trick bag are supposed to care that Trump’s a jerk?
. . .
Is sexual assault bad only when President Pantsuit’s nominal hubby isn’t the one committing it?

Are we still doing the rule of law? Anyone who spent 15 minutes in uniform – including a Cub Scout uniform – knows that if 5% of what’s been reported that Hillary Clinton did with classified info is true, anyone else would be in Leavenworth making intimate new friends. But to liberals, no biggie. What’s a few felonies involving national security between progressives?

Yet a bunch of suckers voluntarily paid some school Donald Trump licensed his name to and we’re supposed to lose our minds? Gotta say though, many of us are just not feeing the care. We can’t muster up the energy to enforce rules that no longer exist. We have learned that all that matters is winning, that the only truth is power. Beyond that, nothing matters, no one cares. LOL. . .

And now the recriminations from Orlando: Hillary: Hate is not the answer to “people who themselves are divided in their loyalties and their beliefs”


Good catch by Karol Markowicz. Who are the people Hillary has in mind at the end here when she refers to divided loyalties? I don’t think she means jihadis. Their loyalties aren’t divided, and even a Democrat would say it’s okay to hate ISIS, I hope. Is she talking about … Muslims generally? Because that’d be a seven-alarm media fire if Trump said it. It doesn’t sound like a calculated talking point either; it sounds like a slip, something she said just because that’s where her train of thought took her. Although with Hillary, you never know. Would a woman who once subtly cast doubt on whether Barack Obama is a Christian and presented herself as beingadamantly against illegal immigrants casually question the patriotism of American Muslims if she thought it might earn her a second look from more right-leaning voters? Er, why not?

Will she, won't she? Only the polls know.  Clinton explains why she won't say 'radical Islam'. Hillary Evolves, Now Willing to Cite 'Radical Islam' as Problem. Hillary Clinton Utters the Forbidden Words for Progressives. Sort of. Now will you vote for her? In Wake of Orlando Shooting, Clinton Tacks to the Center on Terror

Stop telling me to get excited about Hillary Clinton. No problem!


“What’s so troubling here with respect to what my opponent just said, is somehow that it only matters what you say when you get caught. And character and trust is about well more than that. And blaming others every time you have responsibility? Unfortunately that’s become a pattern, I think, for my opponent.” 
Feel like Election 2016 could use a bit more incivility? Well, then, we’ve got the T-shirt for you!

For a mere $27.68 a pop, the overtly pro-Hillary website Wonkette is peddling anti-Trump apparel, complete with Clinton holding The Donald’s severed head.

Luckily, there’s a historical reference to hide behind here, the story of Judith and Holofernes. Whether that will keep the Secret Service at bay is anyone’s guess. 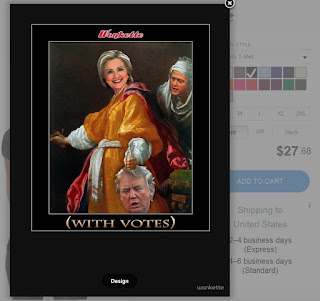 I'm sure the Secret Service will be all up in Wonkette's ass about this.


Lovingly designed at Wonkette’s Missoula, Montana fashion studios, there’s no word on how many have sold since it became available a few days ago. Should they run out, however, there are plenty of other items on offer, including “Truck Fump” notebooks, mugs, pillows and of course, T-shirts.

But it's only bad when Republicans do it.
Posted by Fritz at 10:05 AM