According to a report from four days ago, beginning in 2011, the Russians began monitoring Romanian computer hacker Marcel Lazăr Lehel (aka Guccifer) after he attempted, unsuccessfully, to break into the computer system of the Russian funded RT television network.

After monitoring Guccifer, the Russians were reportedly able to record (both physically and electronically) his actions which allowed the Russian intelligence analysts, in 2013, to not only detect his breaking into the private computer of Secretary Clinton, but also break in and copy all of its contents as well.

The report notes that shortly after Russia obtained Clinton’s emails, they released a limited amount to RT TV which were published in an article in March 2013, titled Hillary Clinton’s ‘hacked’ Benghazi emails: FULL RELEASE.

The sourcing looks a little sketchy to me, but the scenario is almost a certainty. If Vlad found out his spies missed such an obvious opportunity, he'd have them flayed alive, then drawn and quartered. The "two stage" hacking scenario, watching (probably with a key stroke monitor) how Guccifer broke in and then following him in, is a new twist on the story.


In an on-camera commentary this week, CNN’s Jake Tapper told viewers the Obama State Department is stonewalling a reporter for the International Business Times who is investigating Clinton’s role in the creation of the Trans-Pacific Partnership (TPP). Clinton stumped for the controversial trade deal during her time as secretary of state but has since flip-flopped and criticized the pact as a presidential candidate.

Clinton’s emails about the deal, which were first sought last year, now won’t be available to the public until the end of November — long after voters have gone to the polls to choose between Clinton and Trump.

During the primary campaign, Clinton’s Democrat rival Sen. Bernie Sanders attacked the TPPl as “a disastrous trade agreement,” while Republican Trump has made opposing it part of his “Make America Great Again” platform.

That makes Clinton’s opposition to a deal she once championed look entirely political. It also makes the Obama State Department’s decision to withhold the emails until after the election look entirely calculated and deliberate.

Well, it is, isn't it? They'll get over their outrage in time to push her for the general. Battered wives.


FBI Director James Comey knew he had to make a decision that would change his life, and maybe the history of his country, as he surveyed the piles of papers spread out in his office. The Deputy Director in charge of the investigation of Hillary Clinton – a criminal investigation, not some benign “security review” as the Clintonistas had tried to spin it – sat quietly, letting his boss think. The evidence was overwhelming. Hillary Clinton was clearly guilty of multiple felonies, and the Obama Department of Justice was not going to prosecute her. Now, it fell to Director Comey to decide what he would do about it . . .

The bought and paid for appointment of Rajiv Fernando, a wealthy securities trader to a nuclear security commission continues to raise hackles. At Patterico's Hillary’s $$$$ for National Security Positions Scam


New emails seem to show that an unqualified man was given a spot on a national security advisory board because he was a donor to the Clinton Foundation. And when the media came asking questions, Hillary’s shop panicked and he quickly resigned:


Newly released State Department emails help reveal how a major Clinton Foundation donor was placed on a sensitive government intelligence advisory board even though he had no obvious experience in the field, a decision that appeared to baffle the department’s professional staff.
The emails further reveal how, after inquiries from ABC News, the Clinton staff sought to “protect the name” of the Secretary, “stall” the ABC News reporter and ultimately accept the resignation of the donor just two days later. …

Not only did he not get a refund, he continues to raise money for her.

From Salon:  New Hillary Scandal Checks All the Boxes on the Clinton Controversy Bingo Card


Politicos rewarding donors is sadly not uncommon but what makes this particular example stand out is Fernando’s lack of qualifications for a job that involved advising the secretary of state—and, by extension, the president of the United States—on the topic of nuclear weapons. And if that weren’t enough, the story also looks an awfully lot like a Clinton Controversy Bingo Card. In addition to the appearance of quid pro quo with a major fundraiser, we also have a clear lack of transparency, Clinton loyalists going to great lengths to protect her, questions over access to sensitive government information, and, of course, Hillary’s private email account.

Bingo! And Julian Assange claims Google Is In Bed With Hillary’s Campaign


According to the International Business Times, the WikiLeaks founder told attendees at the “New Era of Journalism: Farewell to Mainstream” conference that “Google is directly engaged with Hillary Clinton’s campaign.”

Assange noted that in 2015 former Google CEO Eric Schmidt launched “The Groundwork,” a startup specifically designed to get Clinton elected. 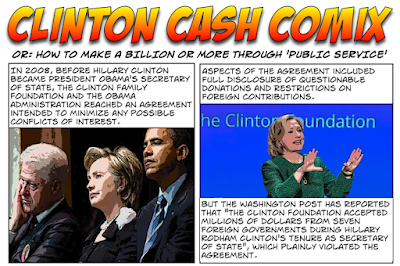