Inside the Cocoon at Clinton.com

Oops, another Clinton lie exposed: Some of Hillary Clinton’s emails had classified markings when she received them

For a year now, Clinton has staunchly maintained that nothing she sent or received was “marked” classified at the time. But Herridge reports that is not be true. In at least one case an email sent to Clinton contains what is known as a “portion marking,” a way to note the classification of specific items or paragraphs within a document:


A 2012 email released by the State Department appears to challenge that claim because it carries a classified code known as a “portion marking” – and that marking was on the email when it was sent directly to Clinton’s account.
The “C” – which means it was marked classified at the confidential level – is in the left-hand-margin and relates to an April 2012 phone call with Malawi’s first female president, Joyce Banda, who took power after the death of President Mutharika in 2012.
Everything after that was fully redacted before it was publicly released by the State Department — a sign that the information was classified at the time and dealt with sensitive government deliberations.

To back up this claim, Herridge cites a 2014 classification training manual which reads in part, “Portion markings consist of the letters ‘(U)’ for Unclassified, ‘(C)’ for Confidential, ‘(S)’ for Secret, and ‘(TS)’ for Top Secret.” Here is a screenshot of the email in question which was sent from Huma Abedin to Secretary Clinton.

The remainder was redacted because it was confidential.


Lawyers for the Justice Department are fighting the disclosure of an immunity deal the government reached with Bryan Pagliano, a former technology adviser to Hillary Clinton.
The DOJ lawyers submitted a motion to U.S. District Court Judge Emmet Sullivan on Friday, arguing that such a disclosure could hurt the FBI probe into Clinton’s private email server.

I dunno about that, it seems like we already know a lot about it. That it's limited, and only protects Pagliano from prosecution for material that he gives up, not material independently developed by the FBI and DOJ. And from the Post: State Dept FOIA officers didn’t know, didn’t ask about Clinton’s use of private email. And, of course, that was always the point.

Google appears to have been caught red handed doing evil,  manipulating the results of its searches to favor Hillary Clinton: Here Are 10 More Examples of Google Search Results Favorable to Hillary.

“While researching for a wrap-up on the June 7 Presidential Primaries, we discovered evidence that Google may be manipulating autocomplete recommendations in favor of Hillary Clinton,” SourceFed wrote. “If true, this would mean that Google Searches aren’t objectively reflecting what the majority of Internet searches are actually looking for, possibly violating Google’s algorithm.”

Google denies manipulating search results to favor Hillary Clinton. Instead, it claimed it was "filtering content universally to weed out offensive or disparaging suggestion. You know, like the fact that the democratic candidate for President is a criminal. Speaking of editing out the past, Hillary deletes more than emails as the latest edition of her memoir removes all her cheerleading for controversial Trans-Pacific Partnership trade deal

Because Shut Up: Critiquing Hillary's $12,000 Jacket Called 'Sexism'. It's "interesting" how Hillary's taste in clothes harks back to her Maoist roots.

Wombat-socho's "In The Mailbox: 06.10.16" features Bill’s Girlfriend Describes Meeting Hillary The Hobbit In 1974, White House Calls FBI Probe Into Clinton E-Mails “Criminal Investigation” – On Same Day Obama Endorses Her, The Fate Of The Second Amendment Depends On Whether Trump Or Clinton Is Elected President and Deposition Drama. The latter features an interesting reconstruction of Cheryl Mills deposition to Judicial Watch:


Don’t sit up nights waiting by the phone. The last thing Trump needs on his ticket is another reality-TV billionaire; he needs someone who can balance out the ticket and get nervous voters to take him seriously as a commander-in-chief. Cuban might make more sense for Hillary Clinton, who needs an outsider with some charm and charisma who can appeal to a broader swath of people than does Warren, but she has better options within the Democratic Party — and needs to keep the “unserious” label firmly attached to the GOP’s ticket.

Meade is having a good week, noting that "... Clinton supporters are analogous to the wife in Battered Wife Syndrome...."


"In a brilliant critique that I've stolen from a young family friend of ours who recently earned his degree in psychology, Clinton supporters are analogous to the wife in Battered Wife Syndrome. Go ahead and look up BWS -- you'll see it works. Now plug in Media for Wife and you'll see the same. Trumpians too, though to a lesser degree because the abusive relationship is still in its early stage of dating -- romantic steak dinners, careful grooming, fancy golden hotels, and tender sexy words whispered in their hopeful ears."

And because all good parody has a grain of truth, from the Onion: Campaign Announces Clinton Has Entered Incubation Period After Securing Nomination, Candidate Transitioning Into Mature Presidential Form Inside Cocoon, Aides Say 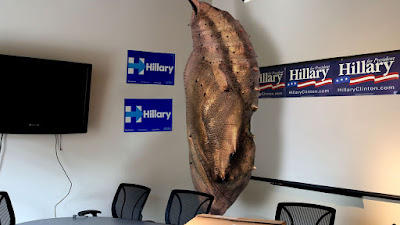