A Constitutional Crisis over Clinton.com?

. . . How the FBI can look at all this and not recommend prosecution of someone for something in EmailGate strains the imagination. Yet President Obama has clearly signaled that it’s all no big deal. Director James Comey has a tough job before him when he takes the FBI’s official recommendations regarding EmailGate to Attorney General Lynch for action, probably sometime this summer. Since Comey is now under a cloud over the FBI’s embarrassing mishandling of Omar Mateen, the Orlando jihadist mass murderer, perhaps his resignation over that matter would be welcome in the White House, which then could find a new director more willing to bend to Obama’s wishes. . . 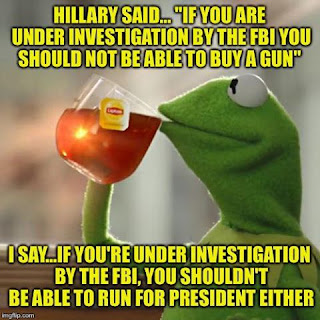 JAG Expert: FBI Director Comey Has Delayed the Hillary Investigation "For Too Long"


. . . Keiler argues that Hillary’s convenient surge past the magic delegate number the night before the California primary, through a sudden burst of superdelegate declarations, served both her political and legal purposes. “If Comey is an honest policeman,” he writes, “the best time for him to have acted was before Hillary claimed the nomination. Then he would only have been referring charges against another—albeit notorious—private citizen. After the nomination, Hillary becomes not only the standard bearer of one of America’s two great political parties, but a ‘historic’ figure as the first woman to do so. As such, it behooved both Hillary and her backers in the media to reach that point ASAP.” . . . 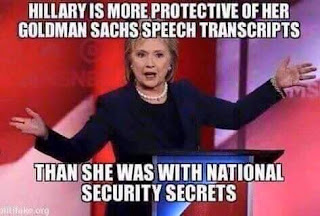 
Internal memos, dated May 2015—long before the first state voted in the Democratic primary—referred to Hillary Clinton as though she was already the Democratic presidential nominee. The documents leaked by Guccifer 2.0 not only illuminate the DNC’s efforts to ensure Clinton’s coronation but also reveal the strategies used to shield her from criticism on ethics, transparency and campaign finance reform—all vulnerabilities for the corrupt Establishment darling.

Ann Althouse finds Bernie backers revved up by Guccifer 2.0.  "With proof that #Bernie never even had a chance, I shall double down and vote #BernieOrBust in Nov. @TheDemocrats." DNC Financial Records Stolen By "Guccifer 2.0" Hacker swiped personal info on thousands of party backers. Well, they were at least as safe as the national secrets on Hillary's basement server. 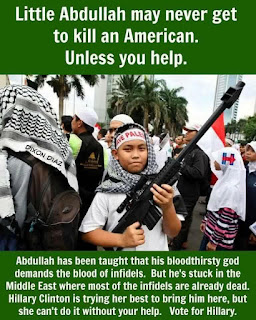 
1) What is Huma’s relationship with a Saudi Arabian official named Abdullah Omar Naseef?

2) Was he the founder of a Saudi charity called the Rabita Trust?

3) Right after 9/11, was the Rabita Trust put on a list by the U.S. government of groups that were funding terrorism?

THANKS, HILLARY: ISIS deploys waves of suicide bombers as Libya enters its apocalypse phase - Libya was entirely a Hillary debacle.

Larwyn's Linx 6/17: Shocking Pic and Video: Is Hillary Too Unwell to Handle the Presidency?, Trump: Clinton paid by countries that 'throw gays off buildings', A Sobering Thought on How Orlando Benefits Hillary, This Week in Hillary Clinton Corruption, Vladimir Putin Has Everything He Needs to Blackmail Hillary Clinton, Hillary's Huge Libya Disaster

A reminder of where the Clintons have been in the past: Flashback Interview: Trump Defends Gays from Clintons in 2000, while, Hillary Clinton continues to take donations from regimes where they lash and murder gays. Now  Bikers have to Protect TRUMP Supporters at Phoenix Rally From Violent Hillary Supporters. 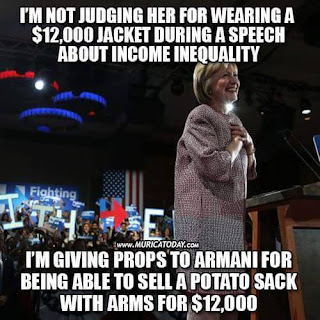 Ann Althouse wonders about The ancient notion that Hillary Clinton must become personal and purpose driven. She's certainly purpose driven, with purpose being to accumulate as much money and power from politics as possible.

Poll: Clinton’s lead over Trump slipping since Orlando. Josh Gerlenter at NRO postulates that with a little maneuvering, Gary Johnson could throw the election into the House: The Electoral Math against Hillary. Seems dubious to me, but sounds like fun to resurrect some old constitutional provisions.
Posted by Fritz at 10:24 AM