Florida man brags about burglary on Facebook, lands him in jail

A Florida burglar who posted a Facebook video bragging about a $500,000 jewelry haul has landed himself and one of his accomplices in jail, police said on Thursday.

Officers from Pinecrest, Florida said they arrested Raderius Glenn Collins, 18, after he uploaded the video to Facebook on May 27. His friend, Marcus Terrell Parker, 27, was arrested after another burglary on June 9, police said.

They are still searching for a third suspect, who is seen in the video in the passenger seat of the car flashing $100 bills to the camera. 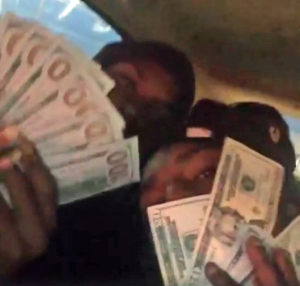 The video, which runs more than seven minutes long and has over 3,000 views, showed the men bragging about their illegal earnings, exclaiming: "We got a safe" and "Can someone say check please?"

The man in the driver's seat makes sure the traffic light is still red and proceeds to proudly reveal his bag of cash to the camera while the other two men cheer.

One of the arrested subjects told police that he and the other two subjects sold the stolen jewelry to a jewelry and watch shop and received $1,300 each in return.

Note to 18 year olds. Not everything you do needs to go up on Facebook.
Posted by Fritz at 5:00 AM