Terrapins, The Other White Meat

An interesting article about the former commercial Diamond Back Terrapin fishery in Maryland, which persisted into recent years: Terrapin, the forgotten Maryland delicacy. There's a great slideshow at the link:

Today, the terrapin is known for being the mascot of the University of Maryland. But there was a time when the diamondback was the signature delicacy of Maryland cuisine. Today one might wear a Rolex; in the “Gay Nineties” of the 1890s, you’d be eating turtle. Hoity toity residents of Baltimore’s Mount Vernon neighborhood even designed special pools in their basements to keep terrapin before they were ready for the chopping block. It was said that the great French General Marquis de Lafayette returned to the United States after the American Revolution mainly so he could try the dish again. 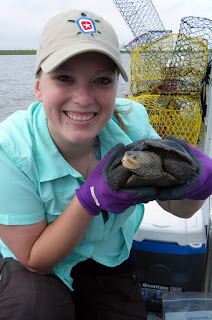 (Ironically, the same way lobster was once considered garbage food and served only to prisoners, the elite dish was originally restricted as food for slaves in the Tidewater region. But tastes change.)

By the 1900s, terps had been fished near to the point of extinction several times, and quotas had to be placed on their capture. Their prices reflect their scarce supply: in 1899, a dozen six-inch terrapin could cost up to $45.

Recipes called for the poor things to be boiled live like lobster, then served with copious amounts of butter as well as sherry or dry madeira.

“The sherry helped cut the weird taste,” says Sun columnist Jacques Kelly, who tried terrapin at an event at the Maryland Club – once considered “the very shrine of terrapin-eating,” according to a 1952 article in The Sun. “The taste was kind of a marshy woodland – you couldn’t help but think of a turtle when you ate it.”

What’s more, it had a weird gummy, slimy texture – but not a pleasant one. “A lot of people tried it once,” Kelly said, “but for every one who tried it, probably only one in 50 actually went back and loved it to have more.” . . .

When I was very young on a trip east with my, I remember my dad and uncle going out after turtles in Accokeek, Virginia. It's not that clear a memory, but I remember them walking in a creek with slippery rocks (which doesn't sound right for the coastal plain, but there it is). My guess is that they were after snapping turtles, if they knew what they were after at all. . .

We see them fairly often over on the eastern shore. They are very susceptible to drowning in crab pots or fish traps, if they wander in after the bait, and can't reach the surface.
Posted by Fritz at 5:46 PM