There's Got to Be a Morning After at Clinton.com

In the State Department email scandal, the Judge Sullivan,  in the Judicial Watch case, determined that the Justice Dept. granted limited immunity to IT staffer Brian Pagliano in Clinton email probe. What does this mean?

The agreements do not give Pagliano blanket immunity in what The Washington Post reported in March was part of an ongoing FBI criminal investigation into the possible mishandling of classified information related to Clinton’s email setup while she was secretary from 2009 to 2013. Instead, such deals typically prohibit prosecutors from using evidence against a witness developed from his own testimony — but not evidence obtained independently.

But the FBI is showing interest in the proceedings of another FOIA case, too. Hmmm: FBI requests permission for secret declaration in Hillary e-mail FOIA case


Late last night, the Department of Justice requested permission for the FBI to enter a secret declaration that the agency could not find records responsive to a FOIA demand from Vice’s Jason Leopold on Hillary Clinton’s e-mail server. If granted, it would make the second secret filing with the court in this particular FOIA case:


The FBI has asked a federal court judge for permission to file a second secret declaration detailing its probe into Hillary Clinton’s private email server.
In the request, which came as part of a Freedom of Information Act (FOIA) lawsuit, the Justice Department offered for the FBI to provide “additional details” about how it “conducted a reasonable search for records” as part of the open records case and “determined that there were no records responsive.”
“These details supplement defendant’s showing that it conducted a reasonable search, but cannot be disclosed on the public record without compromising information that the FBI seeks to protect,” the department said in a filing late on Monday evening.

At the same time, The Hill’s Julian Hattem reports, the DoJ attempted to defend itself against a motion for summary judgment in favor of Leopold by claiming that it does not have to detail the basis for the FBI’s investigation into the server. In that motion, Justice argues that the FBI isn’t just doing a “security review,” but is in fact collecting records for the purpose of enforcing the law, which allows the FBI and the DoJ to withhold them from a FOIA demand . . .

And the State Department claimed that it would take them until the end of time to process and release the emails that Hillary and three other people wrote in their 4 year stint in the Department:  State would need 75 years to compile Clinton emails. Methinks they doth protest too much.

The results of Not-so-Great Tuesday primaries are in. Hillary convincingly won Cali, 56-43, and New Jersey 63-37, eeked out a win in New Mexico, 51-49, split the Dakotas with North going 64-26 Sanders and South 51-49 Hillary, and lost Montana to Sanders, 51-47. I think Hillary now has enough sort of committed delegates to call herself the presumptive candidate of the Democrats. At Althouse: Hillary's faux clinch. Who benefits?


First, it is a fake, since it's not a majority of the democratically chosen delegates who are pledged to vote for one of the candidates. It includes statements by superdelegates, who are free until they actually vote at the convention. . . .

While Jazz Shaw wishes:  The media may have kneecapped Hillary Clinton by declaring her the presumptive nominee. NPR reports Women Weep Over History-Making Hillary Clinton. Yeah, but they weep over a lot things. I think it's the estrogen. Over at Forbes, a macroagression: Forbes’ most powerful woman list once again doesn’t have Hillary Clinton on top.

The Talking Points are out now:  Bernie Sanders should drop out and endorse Hillary Clinton. Period. In San Francisco, Berniecrats lash out at media for calling nomination for Clinton. But did they get naked? In San Francisco you need to be naked for your protests to be covered. Sanders was forced to claim that it's Not sexist to stay in race against Clinton


. . . The journalist interrupted Sanders as he tried to call on another reporter, repeatedly asking the Vermont senator how he’d address women who say he is acting sexist for standing in the way of Clinton becoming the first female presidential nominee in American history.

"Is that a serious question? Your question implies that any woman who is running for president is by definition the best candidate," he said during a press conference in California a day before the state's primary. "If Hillary Clinton runs for president, your point is that it's sexist for any man to oppose her? I don't think it's sexist. I think the issue is, first of all, our focus right now is running and winning right here in California. And the second point that I have made is that it is absolutely imperative that we defeat Donald Trump." 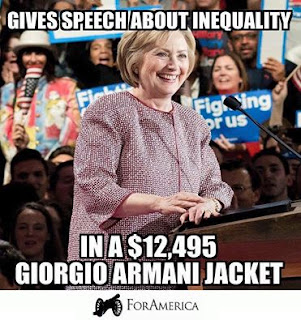 More on Hillary's coat of many colors: The surprising strategy behind Hillary Clinton’s designer wardrobe


Hillary Clinton’s New York primary victory speech in April focused on topics including income inequality, job creation and helping people secure their retirement. It was a clear attempt to position herself as an everywoman.

But an everywoman she is not — she gave the speech in a $12,495 Giorgio Armani tweed jacket.

The polished outfit was a stark contrast to the fashion choices Clinton has made in the past. As first lady, Clinton wore frumpy pastel skirtsuits. As New York senator and secretary of state, she attempted a more serious look, wearing pantsuits in a rainbow of colors — so mocked that they sparked memes. . .


"I condemn all violence in our political arena," Clinton told CNN's Jake Tapper. "I condemned it when Donald Trump was inciting it and congratulating people who were engaging in it. I condemn it by those who are taking violent protests to physical assault against Donald Trump. This has to end."

So far, so good. But Clinton couldn't stop there. She added: "He created an environment in which it seemed to be acceptable for someone running for president to be inciting violence, to be encouraging his supporters. Now, we're seeing people who are against him responding in kind," she added.

As if Trump had some mysterious power over the free will of all anti-Trump protestors. They can't help themselves.

They are democrats, after all.

For some reason, the press is starting to get agitated that Hillary isn't spending enough time with them. WaPo, ABC: Hillary’s claim about press availability is “totally bogus,” you know.


it’s a lot easier to filibuster the short avails with lengthy, unresponsive answers, a technique that Barack Obama has mastered in both the quick-avail and press-conference formats. Hillary Clinton hasn’t mastered much of anything when it comes to press conferences, so she and her team has stuck with either the quick avails or local-news interviews where her celebrity quality can eclipse the news sense of local anchors (another technique that Obama mastered).

All Hillary wants to do is to get her face in front of lots of low-information voters while generating as little baggage as possible. That’s what most front-running candidates want to do, but others are usually more adept at making that strategy subtle.

But when they do: 8 minutes of shame: Reporters covering Hillary embarrass profession with softball questions


Maybe Hillary’s right. These reporters don’t deserve her time if they don’t respect the profession enough to ask her anything tougher than, “Is it hard being such a trans-formative and historical figure?”

A taste of the next 4-8 years? Roger Clinton arrested for DUI.  A funny story about Roger from the old days by Popa Chubby.