A bit of a strange assortment.


"You're putting not just the Clinton server at risk but the entire Department of State emails at risk," said Bob Gourley, former chief technology officer (CTO) for the DIA. "When you turn off your defensive mechanisms and you're connected to the Internet, you're almost laying out the welcome mat for anyone to intrude and attack and steal your secrets."

He was referring to revelations from new court-released documents in a lawsuit by conservative watchdog Judicial Watch. They show the State Department temporarily turned off security features in 2010 so that emails from then-Secretary of State Clinton's personal server would stop going to the department's spam folders.

But it was OK if it allowed Hillary to use the device of her choice and evade FOIA, right?

Clinton spokesman’s revealing response to missing email. It suggests that Hillary et al deleted emails in her possession between the time the State Dept. first started nosing around about her missing emails and when they issued a formal request.


The obvious question here is why Clinton did not turn over this “key message” in the batch of 30,000 emails she eventually handed over to the State Department. We may have gotten a hint at the answer to that question in the response Clinton spokesman Brian Fallon gave to the AP[emphasis added]:

First of all, notice that even Brian Fallon isn’t trying to claim this email was personal. This email clearly should have been turned over.

Second, this business about Huma having some emails that Hillary didn’t is utter nonsense. It’s no good to claim now that Huma filled in the missing gaps. The question is why were there gaps to be filled at all? Clinton was required to maintain these records and to turn them over.

The bit I’ve highlighted above seems to offer part of the answer. It’s not a direct quote from Brian Fallon but clearly the AP believes it is conveying the sense of his comments. The suggestion is that Clinton only turned over emails that were “still in her possession” when the request was received from the State Department.

About that request, you may recall that the Clinton camp has offered some shifty explanations about how that happened. For one, she claimed it was a routine bookkeeping request. That wasn’t true and as the Washington Post reported, the request was, ” prompted entirely by the discovery that Clinton had exclusively used a private e-mail system.”

In addition, it turns out State had been negotiating with Clinton’s attorneys over the documents for five months before the formal request was ever sent.

When Clinton or her spokespeople talk, look for the lie. It's always there. Hillary’s server wasn’t the only thing that could be scrubbed with a cloth. Clinton Held Secret Meetings With Billionaire Foundation Donors and Scrubbed Official Records of Them 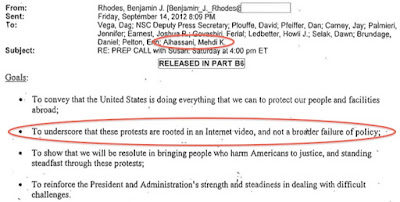 
The ‘smoking gun’ email that reveals who instructed Susan Rice to blame the Benghazi attack on a video also exposes a recipient named Mehdi K. Alhassani. Alhassani was the leader of the Muslim Student Association (MSA), a Muslim Brotherhood front group and attended the sister mosque of the Islamic Society of Boston Cultural Center (ISBCC) mosque attended by the Boston Marathon bombers. It is a mystery how Alhassani slipped through the cracks to become a Special Assistant to the Office of the Chief of Staff, National Security Council Staff, and Executive Office of the President. It is unknown why a few hours before the Benghazi attack, Alhassani met in the White House with Samir Mayekar, a George Soros ‘fellow’ for an unscheduled visit.

But, she doesn't always lie:

FactCheck.org Forced to Correct Embarrassing ‘Clinton Cash’ Error They tried to make it look like Hillary had no power to stop the sale of uranium to Russia:

From recent Hillary convert* Scott Adams' blog: Why Gun Control Can’t Be Solved in the USA


On average, Democrats (that’s my team*) use guns for shooting the innocent. We call that crime.

On average, Republicans use guns for sporting purposes and self-defense.

If you don’t believe me, you can check the statistics on the Internet that don’t exist. At least I couldn’t find any that looked credible.

If you define "innocent" as a fellow drug dealer.


That’s a gross generalization. Obviously. Your town might be totally different.

So it seems to me that gun control can’t be solved because Democrats are using guns to kill each other – and want it to stop – whereas Republicans are using guns to defend against Democrats. Psychologically, those are different risk profiles. And you can’t reconcile those interests, except on the margins. For example, both sides might agree that rocket launchers are a step too far. But Democrats are unlikely to talk Republicans out of gun ownership because it comes off as “Put down your gun so I can shoot you.”

And "put down your gun, and listen to your betters" in government.


*I endorsed Clinton for president for my personal safety. I write about Trump’s powers of persuasion and it is not safe to live in California if people think you support Trump in any way. Also, I’m rich, so I don’t want anything to change in this country. The rest of you might have a different risk profile.