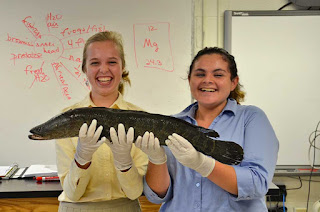 . . . a study indicates the population of northern snakehead has stabilized, and has probably started to drop in at least some areas of the river.

John Odenkirk, a biologist with the Virginia Department of Game and Inland Fisheries, co-authored a paper about it that was published last week in the journal Transactions of the American Fisheries Society. 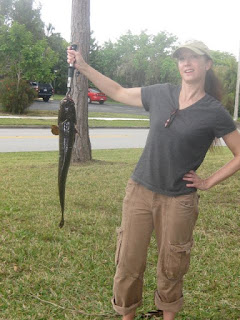 The study looked at snakehead population changes over as long as 12 years in four Virginia tidal creeks: Aquia, Dogue, Little Hunting and Pohick.

During that time, the department has been using electrofishing to capture snakeheads and estimate their populations in those creeks.

In every creek except Aquia, the study found population growth followed by stabilization. In Little Hunting Creek, population estimates dropped every year from 2013 to 2015.

“What we think is happening is intense exploitation, because everybody now likes to eat them, they like to catch them. The bow fishery has taken off. People are hunting them at night with bows and arrows and lights,” Odenkirk told WTOP.

He said the snakeheads appear to be doing what many invasive species do in a new environment; their populations go up, and eventually level off.

Which is pretty much what I predicted would happen. Snakeheads have certainly leveled off or even decline in Mattawoman Creek, much to the dismay of Capt. Mike, who likes having them as a sports target. I caught one there once a few years ago, and I have a bass/snakehead trip there planned for the near future.

Wombat-socho is only a day late with "Rule 5 Monday: Utes Of America".
Posted by Fritz at 7:06 PM