Estuaries and coastal systems are thought to be a relatively small source of atmospheric methane, as little as 3%. However, a new study from the University of Maryland Center for Environmental Science (UMCES) found that the methane building up in the Chesapeake Bay alone, if released, would be equal to the current estimates for all the estuaries in the world combined.

"This is just one estuary and there are many others that go anoxic in the summertime," said study author Laura Lapham of UMCES' Chesapeake Biological Laboratory. "We need to look at these eutrophic estuaries as perhaps a larger source of methane than we thought. This is a side effect of eutrophication that hasn't been investigated in the Bay."

Like many bodies of water, the Chesapeake Bay is overwhelmed with nutrients that cause a type of pollution called eutrophication. Every spring, an influx of nitrogen and phosphorus from lawns, farms, and sewage treatment plants runs into the water of the Bay. These nutrients feed algae as the water warms up in the summer, causing blooms that suck the oxygen out of the water, causing large areas of low oxygen (hypoxia), known as "dead zones," that make it difficult for fish, crabs and other underwater life to live. Some areas closer to the bottom and in the surface layers of the mud may suffer from no oxygen at all (anoxic) during these periods.

Since dead zones in the coastal ocean and estuaries are expanding throughout the world, Lapham decided to look at the Chesapeake Bay, the largest estuary in the United States, to understand what happens to methane release in a body of water that undergoes dead zones on a regular basis.

"We wanted to capture the dynamic nature of oxygen and methane concentrations in one of the most well-known eutrophic estuaries," said Lapham. "We found that places like the Chesapeake Bay could be a more significant input of methane to the atmosphere than we thought."

I've seen methane bubble out of the sediments in the mainstem of the Bay, usually about this time of the year, as the water warms, and fresh organic carbon deposited from spring blooms starts to decay in the sediments. You can see them clearly rising on the depth finder, and breaking the surface.

I'm not waking up nights worried about the contribution of methane to global warming, although it was a little sweaty last night. Methane inputs into the atmosphere aren't very high compared to carbon dioxide, although it is a more powerful green house gas, and it's not rising particularly rapidly. 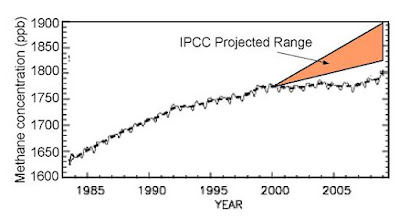