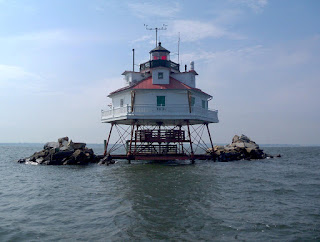 Walleye Pete, Susky Dave and I (say, why don't I have a cool name?) met at 5:00 AM in Deale, with the hope of being out for an early bite at Thomas Point Shoal Lighthouse. Achieved. We had a good top water bite, and landed about 20 fish there, up to 30 inches long before the bite petered out. This photo was taken later, on our way home. 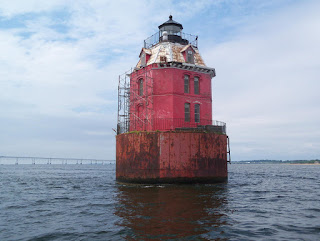 At that point, Pete ran the rest of the way to the Bay Bridge, where we caught a few fish until we got to the Sandy Point Shoal Lighthouse. Along the shoal we hit a major mother lode of large stripers, which we worked until it slowed along with the ebbing tide. 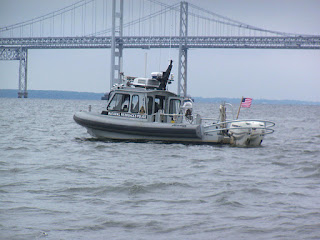 Sometime during this spell we had a relatively short and pleasant encounter with the Fish Cops, who stopped to check safety gear, and who kindly declined to sort through three coolers of fish looking for shorts. They wouldn't have found any, we barely caught any fish we needed to measure today. 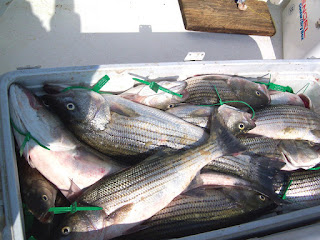 A look at one of the coolers, with the fish all properly tagged with commercial tags identifying them as having been caught for Walleye Pete's commercial license. At the end we had 110 some fish, and they took up four coolers with ice. Pete will take them to be checked and sold to a commercial fish dealer in Jessup tomorrow. 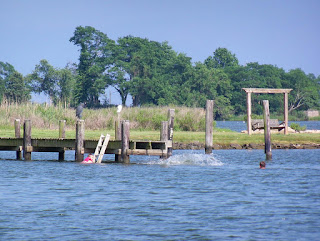 Kids doing something other than playing video games in Rockhold Creek, in Deale.
Posted by Fritz at 8:04 PM