Will California Fall for Clinton.com?

This is the end, my only friend, the end. Hillary gasps for breathe vomits, and shits herself as she approaches the end of the marathon nomination process, having been carried for more than half of the way by the compliant media, and her coterie of insiders. Why, yesterday WITH THE CALIFORNIA PRIMARY TOMORROW, THE AP SUDDENLY DECIDES TO CALL THE RACE FOR HILLARY?  Jonathan Turley goes there: Nixonian palace guard now protects Hillary.


“You asked me about the Clinton Foundation. Do I have a problem when a sitting secretary of state and a foundation run by her husband collects many millions of dollars from foreign governments, governments which are dictatorships? You don’t have a lot of civil liberties, democratic rights in Saudi Arabia. You don’t have a lot of respect there for divergent, opposition points of view, for gay rights, for women’s rights. Yeah — do I have a problem with that? Yeah, I do.”

You should have said something from the Senate floor at the time, maybe. The Washington Post muses about How Bernie Sanders missed his chance to beat Hillary Clinton. He was never serious about it until it caught fire. It surprised him as much as it shocked Hillary.

Showing that the Obama administration still has her back on the email issue: State Department Blocks Release Of Hillary Clinton-Era TPP Emails Until After The Election. This doesn't sit well with Donald Trump, who calls her "the outsourcing candidate" as he Demands State Department Release Hillary Clinton’s Trade-Related Emails. 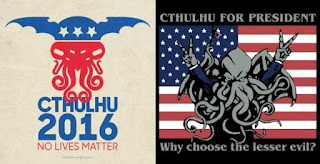 Cthulu comparisons are the mood of the day. Via Wombat-socho's "In the Mailbox,  06.06.16" EBL asks #ReadyForCthulhu? Steve Green (the Vodka Pundit):


My impression is that Clinton's campaign persona is contrived and over-rehearsed precisely because she does not dare risk revealing the hungry id which drives her towards the White House.

That's why her unaffected laugh, on the rare occasions when one escapes her, sends ripples up your skin like the feeding noises of some H.P. Lovecraft beast.

Making the Sweet Meteor of Death seem like the more pleasant choice. Drudge and others have spent a lot of digits promoting a book by a retired Secret Service agent who claims that Hillary makes Cthulu look like a piker.

As Bill Clinton boasts Sanders supporters 'will be toast’, the writer of Dilbert, Scott Adams, endorses Hillary out of an instinct for survival:


I’ve decided to endorse Hillary Clinton for President, for my personal safety. Trump supporters don’t have any bad feelings about patriotic Americans such as myself, so I’ll be safe from that crowd. But Clinton supporters have convinced me – and here I am being 100% serious – that my safety is at risk if I am seen as supportive of Trump. So I’m taking the safe way out and endorsing Hillary Clinton for president.

As I have often said, I have no psychic powers and I don’t know which candidate would be the best president. But I do know which outcome is most likely to get me killed by my fellow citizens. So for safety reason, I’m on team Clinton.

Seriously, though, John McGinness considers Clinton is Greater Threat to Constitutional Jurisprudence than Trump. HuffPo helpfully contributes Five things Hillary Clinton could learn from Donald Trump. But she can't and won't because she's not a real person, she's a robot.

Hillary Clinton still can’t say that the right to bear arms is a Constitutional right. Just because it's written into the Constitution, doesn't mean the democrats won't take it away.

The New York Times! challenges Hillary's credentials as a woman's advocate: Test of Record as Women’s Advocate. It's a pretty sorry record. But Media quizzes Ivanka about her father’s treatment of women. Why not ask Chelsea, too? Instapundit responds, You can't ask Chelsea because kids are off limits!


Speaking at a star-studded fundraising concert at Greek Theatre in Griffith Park Monday, the presumptive Democratic nominee is urging people to vote in the California primary. She is pledging to "come out of the primary even stronger to take on Donald Trump."


The sold-out concert lineup included John Legend, Christina Aguilera and Stevie Wonder. Tickets ranged from $45 to $5,000, with co-hosts raising at least $10,000 and sponsors raising $50,000. The money goes to the Hillary Victory Fund, a joint fundraising committee that allows Clinton to raise large checks.
. . .

Celebrities at a Hillary Clinton benefit concert are noting the Associated Press report that Clinton has acquired enough delegates to become the presumptive Democratic presidential nominee - but they are urging California supporters to vote Tuesday anyway.

Singer John Legend says, "No matter what the AP says about who won the nomination we need folks to vote tomorrow in all the races."

The "She's With Us" concert at the Greek Theatre in Los Angeles also featured musical numbers from Ricky Martin and Andra Day.

And yet, Young Blacks Aren't Enamored of Hillary Clinton. Pretty much the typical reaction. She's just not that likable. But if you can't win the way you want with the electorate you have, just import a better one: Clinton Stresses Commitment To Immigration Reform In Sylmar Campaign Stop