This Day in History

One of the biggest battles you have probably never heard of, the Battle of Fontenoy:

The three year Carolingian Civil War culminated in the decisive Battle of Fontenoy-en-Puisaye, also called the Battle of Fontenoy, fought at Fontenoy, near Auxerre, on the 25 June 841. The war was the contention over the territorial inheritances —the division of the unified lands of Charlemagne's Carolingian Empire between his grandsons, the three surviving sons of Louis the Pious. Despite provisions by Louis the Pious, war broke out between his sons and nephews. It was a defeat for the allied forces of Lothair I of Italy and Pepin II of Aquitaine and a victory for Charles the Bald and Louis the German. While hostilities continued until another two years into 843, the Treaty of Verdun ending 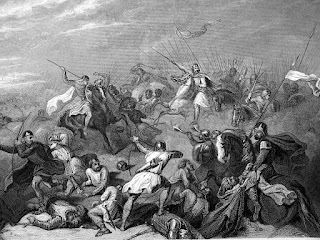 Not to be confused with the Battle of Fontenoy fought in 1745.


The two armies, of about 150,000 men each, met on 25 June. According to tradition, Charles established his camp at Thury, on the hill of Roichat. Lothair and Pepin initiated battle and took the upper hand until the arrival of Guerin and his army of Provençals. While Pepin and his contingent continued to push back Charles men, Lothair was slowly pushed back himself by Louis the German and the Provençals. Finally, when victory seemed sure for Charles, Bernard of Septimania entered the conflict on his side and the victory became a rout. According to Andreas Agnellus of Ravenna a total of 40,000 men died, including Gerard of Auvergne and Ricwin of Nantes, who fell at Charles' side.

By way of comparison, the Allies lost approximately 10,000 men on D-Day. All because Charlemagne didn't leave clear title.


Fontenoy they call its fountain, manor to the peasant known,
There the slaughter, there the ruin, of the blood of Frankish race;
Plains and forest shiver, shudder; horror wakes the silent marsh.

Neither dew nor shower nor rainfall yields its freshness to that field,
Where they fell, the strong men fighting, shrewdest in the battle's skill,
Father, mother, sister, brother, friends, the dead with tears have wept.

And this deed of crime accomplished, which I here in verse have told,
Angibert myself I witnessed, fighting with the other men,
I alone of all remaining, in the battle's foremost line.

On the side alike of Louis, on the side of Charles alike,
Lies the field in white enshrouded, in the vestments of the dead,
As it lies when birds in autumn settle white off the shore.

Woe unto that day of mourning! Never in the round of years
Be it numbered in men's annals! Be it banished from all mind,
Never gleam of sun shine on it, never dawn its dusk awake.

Night it was, a night most bitter, harder than we could endure,
When they fell, the brave men fighting, shrewdest in the battle's skill,
Father, mother, sister, brother, friends, the dead with tears have wept.

Now the wailing, the lamenting, now no longer will I tell;
Each, so far as in him lieth, let him stay his weeping now;
On their souls may He have mercy, let us pray the Lord of all