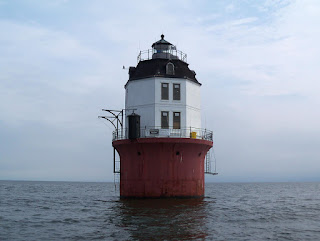 . . . from fishing. Too tired to wade through Hillary garbage, so I'll put up some pictures from today. It was a warm, humid, mostly overcast day on the water with Walleye Pete and Bob. We started with top water fishing at a familiar structure at daylight; in fact a little before daylight. It was the best fishing of the day, we caught 23 stripers there before the bite died and we went on up north to the Bay Bridge and well beyond. 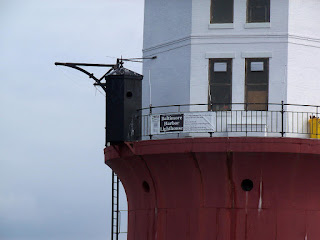 A new lighthouse for my collection, the Baltimore Harbor light. Nice septic system, huh? Fishing up here was slow. We did get a few at various spots (not this one), and went as far north as I've ever been out of Deale.w 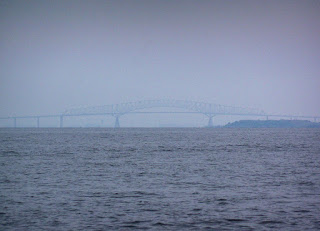 A view of the Francis Scott Key Bridge through the haze:


The Francis Scott Key Bridge, also known as the Outer Harbor Bridge or simply the Key Bridge, is a Steel Arch-Shaped Continuous Through Truss Bridge spanning the Patapsco River in Baltimore, Maryland, USA. The main span of 1,200 feet (366 m) is the third longest span of any continuous truss in the world. It is also the longest bridge in the Baltimore area.

The bridge was opened in March 1977 and is named for the author of the Star Spangled Banner, Francis Scott Key. The bridge is the outermost of three toll crossings of Baltimore’s Harbor. Upon completion, the bridge structure and its approaches became the final links in Interstate 695 (the Baltimore Beltway). Despite the I-695 signage, the bridge is officially considered part of Maryland Route 695. 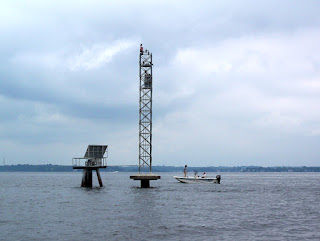 Another interesting structure that held no fish. In the end, we ended up catching a total of 39 fish, for an estimated weight of about 150 lbs. At about $4/lb, it won't be a bad day on the water for Pete, but he did put 100 miles on the boat by the time we beat our way all the way back to Deale against the wind around 3 PM.
Posted by Fritz at 7:10 PM