Russian hackers have no trouble climbing all over civilian email systems, as the Democratic National Committee recently discovered.

Of course, the most controversial civilian email system in the news today is not mentioned, but whatever.

As the Observer observes (nope, not yet) Vladimir Putin Has Everything He Needs to Blackmail Hillary Clinton. I see only two problems with that scenario. First, Hillary has shown no ability to feel shame, and second, it would take a non-compliant, free and critical media to bring it to the nation's attention. Clinton aides fast-tracked top-secret clearance for donor. Of course they did, otherwise, what use is there in giving her a donation? Even Green Party Nominee Jill Stein Blasts Clinton Over EmailGate though I suspect her presidency would be even more of a horror show. But maybe not . . . Hillary's Huge Libya Disaster and The Nations Clinton Bashes For Terrorism Funding Gave UP TO $40 MILLION To Clinton Foundation. She hasn't shown good taste in dictatorships.

The Clinton Global Initiative scam is crashing. The Clintons may be immune to shame, but some of their enablers may not be. Instipundit shouts "ANALYSIS TRUE", and notes:


Pay-for-play has long been the Clinton’s M.O., especially since Bill left the White House and they launched the Clinton Global Initiative and the Clinton Foundation.

So why are the payers holding back just when Hillary seems poised to wield as much power (if not more) as Bill ever did?

Wading through the blood, bodies and spent cartridges, Hillary raises money off Orlando terrorist attack, andAnn Alhouse catches Bill Clinton to trying to help Hillary's stance on gun control   "Did you see how dark it was? It’s likely that more people would have been killed" in Orlando if the clubgoers had been armed. - Said Bill Clinton. Because it worked out so well that way it was. From the comments:


Oh yeah, I might note that the sights on my carry pistol work VERY well in low light situations.

But thanks for the lesson, Slick.

Obama, Clinton Say 'Disarm' While Failing to Protect. Self defense should always be one's right.

John Stossel ran into Hillary Clinton in Australia. Turns out she's not that into debating the issues. But Oprah Winfrey Endorses Hillary Clinton in Upcoming Election: 'It's a Seminal Moment for Women' One might think Clinton boosters might avoid the word "seminal" and substitute something more feminine. 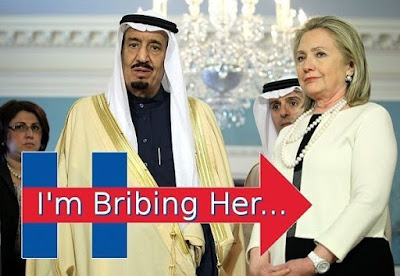 Donald Trump calls her ‘Crooked Hillary,’ but his fans just say ‘b----’ Some people who are not his fans also call her that. We may even use some additional adjectives.

Poor Bernie, to come so far, and go home empty handed: Bernie Sanders Not Being Vetted as Hillary Clinton’s Running Mate. However a make-believe Indian Native American is being considered. And now Clinton initiates DNC takeover. It's her party now, for better or worse.

Glenn Reynolds notes, if you want better candidates for President, make the job less important: Shrink presidency to improve candidates. The rewards are too high to attract true altruists.
Posted by Fritz at 5:15 PM