The decks didn't get cleared yesterday due to my long fishing trip and subsequent meeting, so we have a build up of suppuration in the boil that is Clinton.com. 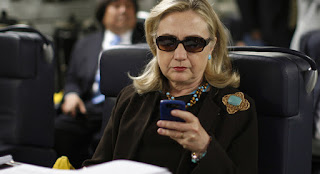 Today we found out that a classic photo of Hillary using her non-State Dept. Blackberry led to State official’s query about email account. The FBI reported that the Records from Clinton's email server being held as 'evidence'


One other interesting aspect of this filing. The FBI does confirm that they have been in contact with the State Department and that those communications contain “non-public information about the nature, focus, and scope of the FBI’s pending investigation.” In other words, some at the State Department already have insight into who the FBI is targeting. That could be significant because anyone following this long saga is aware the State Department has frequently echoed the Clinton campaign and seems determined to protect her, no matter how absurd it makes them look.

Even Josh Ernst admitted, among a word cloud of obfuscation, that the FBI was carrying out a criminal investigation of this matter.  From the AP Experts say Clinton emails could have compromised CIA names.


The names of CIA personnel could have been compromised not only by hackers who may have penetrated Hillary Clinton's private computer server or the State Department system, but also by the release itself of tens of thousands of her emails, security experts say.
. . .
At least 47 of the emails contain the notation "B3 CIA PERS/ORG," which indicates the material referred to CIA personnel or matters related to the agency. And because both Clinton's server and the State Department systems were vulnerable to hacking, the perpetrators could have those original emails, and now the publicly released, redacted versions showing exactly which sections refer to CIA personnel.

Other Emails in Clinton Probe Dealt With Planned Drone Strikes. Yes, but it was important for her comfort that she be allowed to use a private unsecured server for all her State Dept. business. Quips Glenn Reynolds, "I thought it was just about her and Chelsea's Yoga schedule." According to a Fox News Poll a majority of the public thinks Clinton is lying about emails. That's because she's lying about her emails. The Atlantic! Hillary Clinton's Truth Problem. She doesn't have a problem with it; she has an aversion.

Hillary told the Donald "delete your account", referring to his Twitter abuse. Ace notes: Hillary Clinton Makes "Delete Your Account" Joke Because She Knows We're In a Degenerated Fallen Republic And She's Above The Law. In When did "Delete your account" become a cute, hip thing to say to somebody on Twitter? Althouse suggests that Hillary should be careful about using the word "delete":


And Trump's response to her "Delete your account" was also original and funny, and it contained 2 pointed observations that should have made her wish she [her people] had never said that: "How long did it take your staff of 823 people to think that up--and where are your 33,000 emails that you deleted?" Did no one pause to ask: Is "delete" a good word for me or are there some associations with "delete" that could be thrown back at me? Apparently not.

A reminder of why Hillary might have wanted her State Dept. emails hidden from FOIA. How Clinton Donor Got on Sensitive Intelligence Board


Newly released State Department emails help reveal how a major Clinton Foundation donor was placed on a sensitive government intelligence advisory board even though he had no obvious experience in the field, a decision that appeared to baffle the department’s professional staff.

The emails further reveal how, after inquiries from ABC News, the Clinton staff sought to “protect the name” of the Secretary, “stall” the ABC News reporter and ultimately accept the resignation of the donor just two days later.

Copies of dozens of internal emails were provided to ABC News by the conservative political group Citizens United, which obtained them under the Freedom of Information Act after more the two years of litigation with the government.

A prolific fundraiser for Democratic candidates and contributor to the Clinton Foundation, who later traveled with Bill Clinton on a trip to Africa, Rajiv K. Fernando’s only known qualification for a seat on the International Security Advisory Board (ISAB) was his technological know-how. The Chicago securities trader, who specialized in electronic investing, sat alongside an august collection of nuclear scientists, former cabinet secretaries and members of Congress to advise Hillary Clinton on the use of tactical nuclear weapons and on other crucial arms control issues

Quippeth Steve Green: "It's exactly what you think it is . . . No biggie, just nuclear security issues."

Obama, shockingly, came out in support of Hillary, prompting Meade (Mr. Althouse) to say: "I think this Barack Obama campaigning for Hillary is cover. She's going to get indicted." "He knows she's going to get indicted. He'll be able to say, 'I didn't know. Why would I be campaigning for her?'" Ace: Breaking Wind: Incompetent Layabout Failure Joyboy Endorses America's Veineyest Mothballiest Abuela.


Sean Davis asked a question on Twitter: Obama is Loretta Lynch's boss. Loretta Lynch makes the decision whether or not to follow the FBI's urging of an indictment against Hillary. But her boss just endorsed the target of the FBI's investigation for President.

In what world is this woman not beset by a fatal conflict of interest?

or, per the ninnies of the right and their latest hysterias: Would that be racist to ask, given that both Obama and Lynch are not white?

LIKE A DEDICATED CORPSEMAN, HE PROMISES TO CAMPAIGN IN ALL 57 STATES: Obama ‘Cannot Wait to Get Out There and Campaign for Hillary.’ I'll bet she gets a lot of endorsement from the golf course.  I’M OLD ENOUGH TO REMEMBER WHEN THE LEFT POSED AS BEING THE ANTI-ESTABLISHMENT: Me, too. Can Hillary Clinton and Barack Obama Save the Establishment?


A “Democratic insider” tells the Politico, “No way in hell. She hates her, and she doesn’t want a competitor for power in her White House. The ‘V.P. candidate as attack dog’ thing is long over. Every single Democrat is and will be attacking Trump every day.”

Hillary hates Warren? Presumably the feeling is mutual, despite whatever posturing Warren does for the team.

Does anyone in the inner circle actually like Hillary? Other than Huma, that is.

Althouse is not keen on the notion:

. . . Especially Elizabeth Warren. Elizabeth Warren is such a passionate speaker that it's actually pretty weird. If you align with her on the issues, you may think it's absolutely wonderful, but if you don't, you might feel very uneasy, as I did watching her on the Rachel Maddow show last night. Warren gets so excited, it's like she's in the middle of a heated argument. It's very theatrical. That alone could be off-putting to many people, if we were just deciding if we wanted to hand power to her. But think about the set of her and Hillary. Hillary's style is so emotionally flat, it's almost robotic. Why would you pair that with Warren? If it were a TV show, it might be great fun — a kind of Kirk and Spock effect, but with Spock in the captain's chair. . . 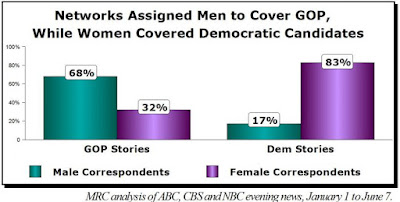 AP warns reporters to be safe after harassment from Sanders fans. Why are the Democratic Socialists so violent? Ace:


This will not be a major story, however, because the bad actors here are Democrats -- Bernie Bros., to be more specific. Oh you'll read a hundred pearl-clutching think pieces about Trump's less reputable, more excitable supporters, but liberal Democratic men? Nope. A one day mention, then we drop this like it's hot.

"At the heart of the rage against Hillary Clinton and the Democratic Party, the campaign aides closest to him say, is Bernie Sanders."


From "Inside the bitter last days of Bernie's revolution/For better and for worse, Sanders made all the big decisions" at Politico.


Convinced as Sanders is that he’s realizing his lifelong dream of being the catalyst for remaking American politics—aides say he takes credit for a Harvard Kennedy School study in April showing young people getting more liberal, and he takes personal offense every time Clinton just dismisses the possibility of picking him as her running mate—his guiding principle under attack has basically boiled down to a feeling that multiple aides sum up as: “Screw me? No, screw you.”...

ADDED: It was Clinton's attack on Sanders's gun record that (apparently) set him off. He held off at first, and:


“If they hadn’t started at it by really going hard at him on guns, raising a series of issues against him, that really was what led to him being much, much more aggressive than he otherwise would have been,” said Devine....

Even before the AP broke the story, members of the media were pressuring Sanders to end his historic bid by suggesting his refusal to concede was sexist.

Next for Democrats: A delicate dance to broker peace between Clinton, Sanders

Millennials still not that excited by prospect of first woman president


So why aren't millennial women excited by the prospect of seeing the first female president in our lifetime? Precisely because the woman who might take that honor is Hillary Clinton.
. . .
Here's the thing: Clinton appears to be fighting the battles of her generation of women, not today's. She still tells stories of past sexism (or questionable accounts of current sexism) that just don't appeal to many young women today. We get it, women had it tough in the past, but today we're making progress (without government interference) and don't have to keep whining about the bad old days of "Mad Men"-style offices.

California contraction: Hillary loses 30% of votes from 2008. The more prominent she makes herself, the less likable she becomes.

From Wombat-socho's "In the Mailbox, 06.08.16", Red Hillary,  #CrookedHillary – Wrong Eight Years Ago And Wrong Today, The Extortion Election Of 2016 and from  "In the Mailbox, 06.09.16" This Tweet About Martin O’Malley’s Hillary Endorsement Is Just Plain Sad, and the ever almost always sensible Megan McArdle: Five Reasons Decent People May Want To Back Trump

Larwyn's Linx: NY Times Very Concerned That Democrats Won’t Renounce Hillary Clinton, Fake Native American Endorses Hillary Clinton, Hillary blathers incoherently when asked how her economy would differ from Zero's, The Clinton University Scandal, and Biden’s endorsement of Hillary has people wishing even more that he had run instead,

Maggies Farm: How Hillary Has Made Our Politics Worse and Trump's Thin Skin vs. Clinton's Thick Head - On war and peace, he's dangerously unpredictable, while she's predictably dangerous.