From blog friend William Teach, who usually blogs at Pirate's Cove, but from Doug Ross@Journal, this interesting, but not really surprising piece of statistics: VOX QUIETLY REVEALS: Democrat-Run Blue States Have About 50% More Mass Shootings Than Red States 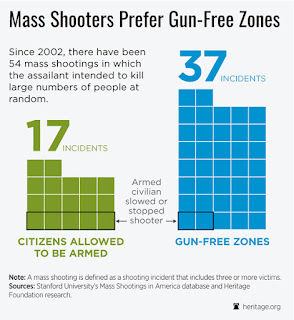 And what are Democrat-run states? They’re the ones with the most gun restrictions.

This all means that mass shootings are “42 percent more likely to occur in a blue state after accounting for population differences.”

I suspect several things play into this. Red states tend to be more predominantly rural than blue states, and while guns are more common among rural residents as tools, they aren't used as much in crimes as they are in more urban areas. In rural areas, it might even be difficult to get three or more victims in one place. Plus, there's the added danger that they'll be well armed and shoot back.
Posted by Fritz at 5:00 AM