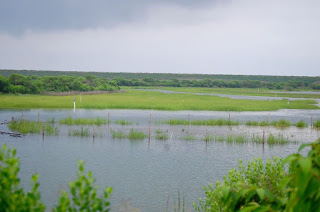 The nation’s first island reclamation project using dredged materials — the Paul S. Sarbanes Ecosystem Restoration Project at Poplar Island — is in the middle of its second phase, with at least one more phase approved through 2044.
. . .
Work on the last remaining remnants of Poplar Island, which is located south of Kent Island and and northwest of Tilghman Island, started in 1998. It is an effort to reclaim the island that had shrunk from its 1847-surveyed footprint of 1,140 acres to between 3 and 5 acres due to erosion — wind, waves and currents that slowly reduced the island’s size until it virtually disappeared.
. . .
Since 2001, Poplar Island has been getting dredged material from the Port of Baltimore shipping channel to build habitat on the island. Homeister said more than 30 million cubic yards of dredged material have been placed on Poplar Island to date, but the whole site can manage about 68 million cubic yards.

The island’s first and second phases comprise two types of habitat — intertidal wetlands on the east side of the island and uplands on the west, where erosion typically has been the worst, Homeister said. Each area has different cells, which are smaller, more manageable areas designated for work.

“We tell people that we’re kind of building the island like an ice cube tray,” Homeister said. “We’re filling up one ice cube at a time going all the way around.”

Cells in the wetland habitat were teeming with wildlife on Tuesday. Thousands of native and migratory birds inhabit and nest on manmade and natural grounds in each wetland cell that are designed specifically to attract a certain kind of bird. Meanwhile, fish have populated the waters in the wetlands, having swam in from the Bay through channels dug out as entryways into the wetlands, which can rise and fall with the natural tide.

I've fished around Poplar Island a few times in the last couple of years. It still looks a little industrial, with rip rap shorelines, and large docking areas, but it's obvious that the interior of it is covered with marsh vegetation, although stands of trees mark the remains of the old islands. It's a reasonable use for the dredge spoil, although it will be many years before it is anything resembling natural.

After they finish Poplar Island, the plans are to continue on down the Bay to James, and Barren Islands, although I don't expect to see that any time soon.