About the Convenience of that Clinton.com Email Server

Not the biggest day in news out of Clinton.com, but one which may turn out to be a turning point. In her deposition to Judicial Watch, Huma Abedin Testifies: Hillary's Determination to Use a Subpoena-Proof Invisible Email System Interfered With Her Ability to Do Her Job


Remember, everyone: the official reason Hillary says she set up her own server was for "convenience."


Top Hillary Clinton aide Huma Abedin testified Tuesday that the private email server Clinton chose to use for both personal and government communications may have hindered the former secretary of state's ability to do her job.
Citing an instance in which Clinton missed a call from a foreign minister because aides did not receive her emails on the matter, Abedin testified that the private email arrangement might have interfered with Clinton's ability to carry out her duties.
"So she wasn't able to do her job, do what she needed to do," Abedin said of the incident.
The former deputy chief of staff to Clinton was deposed Tuesday by conservative watchdog Judicial Watch in its Freedom of Information Act lawsuit over Abedin's personnel records....
Although Clinton claimed in March 2015 and many times since to have used private email in order to consolidate her communications on a single device, Abedin confirmed reports that Clinton had used multiple devices to access her emails.
"It was not her practice to do so, but when her system on her BlackBerry went down, there was a period where I know she did use her email on her iPad for maybe a week or two, if I remember correctly," she said.

We always knew the "convenience" excuse was a lie. She had multiple devices anyway. It was always about avoiding FOIA.

THE FBI INVESTIGATION OF HILLARY: IS THE FIX IN? Bill meets privately with Loretta Lynch at an airport in Phoenix, Arizona. What did they talk about?


Lynch said the private meeting on the tarmac did not involve these topics. “Our conversation was a great deal about grandchildren, it was primarily social about our travels and he mentioned golf he played in Phoenix,” said Lynch Tuesday afternoon while speaking at the Phoenix Police Department.


Yoga routines, she claims -- she swears they talked "a great deal" about personal stuff, like about grandchildren.


"Our conversation was a great deal about grandchildren, it was primarily social about our travels and he mentioned golf he played in Phoenix," said Lynch Tuesday afternoon while speaking at the Phoenix Police Department.

Note that Hillary claimed the emails she deleted involved her granddaughter.
This seems to be the go-to lie this bunch favors-- "The American Rubes like Families, so we'll claim all our corrupt communications have to do with babies and puppies!!!"

Speaking in Mogadishu, Hillary Calls Confiscating Your Guns a "Civil Rights" Issue Of course it's a civil rights issue. She's the one on the side of taking away civil rights.

From Wombat-socho's "In The Mailbox: 06.29.16", Former Navy SEAL – Hillary Killed My Friends In Benghazi

A great cornucopia at  Larwyn's Linx 6/29/16, Why Hillary Is Stalling Her FBI Interview, The Crazy People Have Taken Charge of the Democratic Party, It took me six days to fact-check a Hillary speech--it was that bad, Hillary Clinton’s Callous Response To Official Benghazi Report, Trump is going to win, Trump and Clinton issue 2 very different statements on Istanbul terror attacks, Violent Hillary Supporters Prepare For Cleveland And The Republican Convention, Dems Mistakenly Reveal Absurd Amount of Money Clinton Friend Got For ‘Consulting’, GOP Benghazi report charges Obama-Clinton did nothing to save lives, Benghazi Report: Obama Skipped Intel Briefing the Day After, Went to Vegas Fundraiser, Here’s a Damning Part of Benghazi Report That We All Should Be Talking About, Benghazi report claims military failed to act after terrorist attack began, New Hacked Emails Said to Show How Hard Clinton Staffers Work to Keep Press Away, Secret Service Agent Said 'Good Morning' To Hillary, Check Out Her Nasty Response and from Larwyn's Linx 6/30/16, Gross impropriety: AG Lynch meets secretly with Bill Clinton, Dems circle wagons of lies around Hillary after Benghazi report, Shocker: Clinton Super PAC Took Illegal $200K Donation, #NeverTrump prefers a president with a top aide with ties to terror, Loretta Lynch Privately Meets With Bill Clinton Aboard Personal Plane, Judge Expands Investigation into Hillary Clinton’s Dealings with Foundation Donors, The Clinton Foundation is a 'conspiracy' that Hillary and Bill use as a 'piggy bank', Five Key Takeaways From Huma Abedin’s Deposition Testimony, 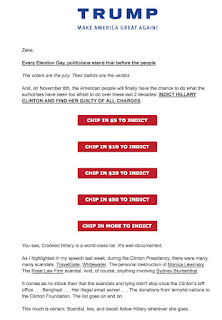 Vince Foster even made an appointment with a psychiatrist shortly before he died, but he killed himself before that meeting.

A suicide note was found — but not until six days after he died. And it was suspiciously located in his briefcase, torn to pieces with one piece missing. The briefcase was supposedly searched right after his death and — again presumably — no suicide note was discovered.

The contents of the note were never released and Lisa refused to discuss the matter with an investigator. There were rumors that it wasn’t even a suicide note — that it was just the ramblings of a disgruntled White House insider written well before he took his life.

A bit like the Rose Law firm billing records, which mysteriously reappeared after several years.
Posted by Fritz at 9:50 AM