A minimal lot today, but I'm sure the political Sunday shows will generate new interest:

A federal judge has ordered the Obama administration to release new emails connected to Hillary Clinton before Democratic National Convention in July.

In an order late on Wednesday, Judge Ketanji Brown Jackson told the U.S. Agency for International Development (USAID) to hand over to the Republican National Committee (RNC) whatever records it could as part of an RNC’s open-records lawsuit on July 11.

After that, USAID will need to consult with the State Department about hundreds of other pages of documents, which could be released at some point in the future.

The RNC sued the aid agency in March, seeking two sets of communications: those between USAID officials and former aides at the State Department, as well as those between USAID and private domain names associated with Clinton, former President Bill Clinton and others including the Clinton Foundation. The effort appeared to be related to allegations that the former secretary of State’s family foundation had undue influence on USAID.

I'm sure by now the Clinton mob is fairly good at camouflaging the quo pro.

The cankles that launched a thousand boats full of refugees: Hillary's Libya: The Second Time as Farce

So this is the person who is now telling us that Donald Trump is dangerous. Well, it makes sense, because this is the same person who told the parents of the Benghazi victims at their children's funeral that their sons died because of the response to some amateur YouTube video nobody watched and not from an organized terror attack by an al Qaeda affiliate -- in other words, an absolutely immoral liar.


Says Dan Drezner (at The Washington Post). The first is — as I suspect you know — it was mainly an attack on Donald Trump. He's "dangerously incoherent," etc. We get it, but what does that tell us about Clinton's foreign policy?

The second big problem is: "Commentators are already saying that Clinton is to the right of Trump on foreign policy, following up on previous pundit claims that Clinton is more hawkish than Trump on matters of national security." But according to Drezner, "hawk-dove distinctions" don't "really work" and are "pretty useless." He seems to like the idea of replacing "hawk" and "dove" with Hamiltonian, Wilsonian, Jacksonian, and Jeffersonian. In this set-up, Trump gets Jackson and Hillary gets both Wilson and Hamilton.

Remember, It was Wilson's failures that led to the Second World War.

Bimbo eruption! As the battle for California approaches, Clinton drafts Hollywood  starlets into the fray:


Hollywood actresses, including Sally Field, Elizabeth Banks, and Debra Messing, joined Hillary Clinton at a rally in Culver City on Friday morning. They defended the Democratic presidential frontrunner and tore into her chief rival Donald Trump, just days before the critical California primary.


Another Culver City reference! What a happening place, I guess I left 50 years too early!

Field, Banks, and Messing were joined by fellow actresses Sophia Bush and Mary Steenburgen, all of whom helped introduce the candidate at the rally at West Los Angeles College.

The actresses reportedly wasted little time in going after Trump.

Wow, that was deep!


For her part, Will and Grace star Debra Messing reportedly called the presumptive GOP nominee a “reckless bigot and misogynist,” while One Tree Hill‘s Sophia Bush said that Trump “wants to make our country a fearful reality show contest.”

Two-time Oscar-winner Sally Field seemingly refrained from criticizing Trump, focusing instead of defending Clinton from her high unfavorability rating among the general electorate.


“What is this, a high school popularity contest?” the Forrest Gump star said. “She’s not running to be everybody’s friend, she’s running to be the President of the United States.”

Meanwhile, Bernie Sanders, in a move that signals that he is no longer trying to win the nomination, but rather in the business of trying to push Hillary even further left, picked a fight over environmental issues, including fracking:


Bernie Sanders and Hillary Clinton are both hoping green voters will put them over the top as they near the end of a tight California primary fight.

Clinton this week locked up two key endorsements — from an environmental group and Gov. Jerry Brown (D) — both thanks to her positions on environmental issues.

Sanders, meanwhile, is taking his environmental message directly to California voters. He's endorsed local efforts to block new fracking operations, an issue where he argues Clinton is weak, and pushed her on other initiatives dear to greens. “I urge Secretary Clinton to be bolder,” Sanders said at a climate change press conference on Thursday.

“Of course she recognizes the reality of climate change, but I want her to join me in supporting a tax on carbon. I want her to change her views on the very important issue of fracking.”

Fracking for natural gas is the primary reason that US carbon dioxide emissions from energy have actually declined in recent years. Surprise Side Effect Of Shale Gas Boom: A Plunge In U.S. Greenhouse Gas Emissions 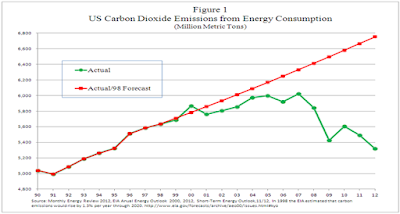