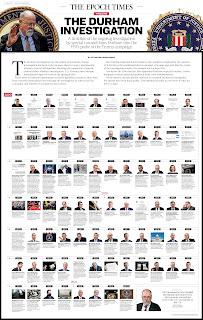 Dan Chaitin recounts how DOJ releases financial activity report on Durham special counsel investigation. I think they want to remind everyone it's costing money and yielding no tangible results. ET has an Infographic Timeline of the Durham Investigation (right). Also from Dan Chaitin, DOJ's 'relentless pursuit' has Andrew McCabe talking about John Durham. Any investigation that is discomfiting Andy McCabe is doing God's work in my view. He's got a lot of gall complaining.

Jack Cashill at Am Think thinks about Barack Obama’s Parallel Russian Universe in a book review of Edward-Isaac Dovere's new bestseller, Battle for the Soul: Inside the Democrats' Campaigns to Defeat Trump. "Although no great fan of Barack Obama, Dovere accepts uncritically Team Obama’s collective amnesia about the Russian collusion plot." Jordan Davidson at Da Fed features GOP Legislators who Demand DOJ Answer For Russia Hoaxer Susan Hennessey’s Appointment. But according to Matt Margolis at PJ Media, Trump Wants DNC and Hillary Campaign Held Accountable For Bogus Russian Collusion Witch Hunt. LI, Robert Mueller to Teach Class on Mueller Investigation “Mueller will teach the course alongside Aaron Zebley, Jim Quarles and Andrew Goldstein, all of whom worked with him during the investigation.” At least they'll be able to nudge him awake when he dozes off.

"For all the fake news 'journalists': Let me be VERY CLEAR — There is NO reason whatsoever for any coup in America, and I do not and have not at any time called for any action of that sort. Any reporting of any other belief by me is a boldface fabrication based on twisted reporting at a lively panel at a conference of Patriotic Americans who love this country, just as I do. I am no stranger to media manipulating my words and therefore let me repeat my response to a question asked at the conference: There is no reason it (a coup) should happen here (in America)," Flynn said on Sunday.

Sidney Powell, an attorney who has represented Flynn, also said Flynn did not endorse "any act of violence or any military insurrection" and claimed the media had "grossly distorted" his comments, according to CNN.

And Matt Lewis at Da Beast warns Flynn’s Coup Talk Is a Warning About the MAGA Violence Ahead. Why does the left condone massive violence on the behalf of leftist causes but warm about barely existent right-wing violence? The Political Insider, Michael Flynn Tells Public ‘Don’t Feel Sorry For Me – Feel Sorry For Our Country, Feel Sorry For Our President’

Jonathon Mosely at Am Think thinks New York Prosecutors are Screaming at the Sky, while at Da Caller, Greg Price reports ‘They Are Searching For A Crime’: Donald Trump Jr. Says New York Attorney General Is Persecuting Her Political Enemies. That was clear when she made prosecuting Donald Trump one of her campaign promises.

The Federal Election Commission has fined the National Enquirer’s parent company $187,500 for “knowingly and willfully” violating election law by making a payment in 2016 to Karen McDougal, a former Playboy model (NSFW) who said she had an affair with former president Donald Trump years before he was elected.

The decision came in response to a complaint made more than three years ago by the nonprofit government watchdog group Common Cause, which was notified of the FEC’s findings Tuesday.

The group had alleged that the company’s $150,000 payment to McDougal months before the 2016 election was effectively an illegal in-kind corporate contribution to Trump’s presidential campaign. The payment allegedly benefited Trump’s campaign by suppressing McDougal’s story of an alleged relationship with Trump before voters went to the polls.

That ruling seems pretty obvious in retrospect. American Media, now known as A360Media, admitted in a 2018 negotiation with the Department of Justice that the move was intended to help Trump out in the election. Former employees of AMI leaked information that the company had done this in the past with other celebrity friends of former CEO David Pecker, but this time it put the company afoul of election laws.Now do Facebook, Google and Twitter on Hunter's Laptop, not that a $150,00 fine would seem anything more than a licensing requirement. And at Da Caller, Stormy Daniels Says She ‘Would Love Nothing More Than’ To Testify Against Trump.

I can't tell you happy I am that Karen and Stormy (NSFW) are back in the news.


“I have not been called to testify yet, but I’ve been very forthcoming since the beginning of all this that I would love nothing more than my day in court and to give a deposition and to provide whatever evidence that they need from me,” the adult film star told CNN’s John Berman on “New Day.”

“I mean, I have all the original forms and emails and wire transcripts and all of that stuff, and I’m happy to turn it over to anybody who needs it, honestly,” Daniels added.

AP rages that  Fed lawyers say  Trump not liable for ‘crude’ remarks at accuser. Capt. Ed at Hot Hair VIP, Biden DoJ to court: We should take over for Trump in defamation case. Kimberly Wehle at the Bulwark wonders Why Is the Biden Justice Department Lawyering on Trump’s Behalf in the E. Jean Carroll Case? Because Biden has his own groping accusations.
From Michael Ginsberg at Da Caller, Newly Released Audio Reportedly Shows Giuliani Pressuring Ukraine To Announce A Biden Investigation. I fail to see the problem. Biden is a crook.


During the call, conducted between Giuliani, then-Special Representative for Ukraine Kurt Volker, and Ukraine government official Andriy Yermak, Giuliani presses for an investigation into then-Democratic front-runner Joe Biden. The partial recording released by CNN does not completely match up with a partial transcript of the call published by Buzzfeed News in April 2021. That partial transcript was reportedly produced by Ukrainian officials.

“All we need from the President is to say, ‘I’m going to put an honest prosecutor in charge, he’s going to investigate, and dig up the evidence that presently exists and is there any other evidence about involvement of the 2016 election, and then the Biden thing has to be run out.’ I don’t know if it’s true or not. I mean, I see him bragging about it on television. And to me as a lawyer, that sounds like a bribe. Someone in Ukraine has got to take that seriously,” Giuliani says in the partially released CNN recording.

Similarly, I fail to see the problem here,  Capt. Ed, NYT: Trump-era DoJ secretly subpoenaed communications records of Schiff, Swalwell. Sauce for the goose and all. Eric Lendrum at Am Great, Trump Justice Department Had Previously Been Investigating House Democrats for Corruption. The Western Journal, Biden's DOJ Announces It Is Opening a Probe of Trump's DOJ 'Adam Mill' at Am Great, Business and Hypocrisy As Usual for Media on Latest Spying Story "The message, “It was the Trump Justice Department,” is exactly the kind of deep state PR message that deflects blame. There never was a “Trump Justice Department.”" He has a point there. Politico whines that Barr distances himself from Trump-era subpoenas of Democratic lawmakers. But Peter Strzok knew the truth, Wa Free Bee, Anti-Trump FBI Agent Suspected Top Democrats of Leaking Sensitive Information, "Peter Strzok texts show the Trump administration was not alone in suspecting Democrats." But at Hot Hair, Capt. Ed catches Politico in the admission that  Leak prosecutor no "Barr crony" after all.

Readers of the New York Times may have been shocked to read their report on the Trump-era Department of Justice’s secret search warrants on communications of members of Congress. Friends and colleagues of federal prosecutor Osmar Benvenuto were even more shocked to find him characterized as a “crony” of then-AG William Barr. The New Jersey Democrat got tapped for the job over his own misgivings, not because he knew Barr but because Barr had been told that Benvenuto was a tough, action-oriented independent thinker within the DoJ.

Associates said Osmar Benvenuto, 39, had misgivings about taking the assignment because he feared he might be seen as tarnished by the work given the perceived politicization of the Justice Department under Attorney General William Barr, but the New Jersey-based career prosecutor ultimately decided to accept the job after friends counseled him to do so.

Several of Benvenuto’s friends and mentors said they found it utterly implausible that he would have taken on a political mission for the Trump administration. For one thing, Benvenuto is registered to vote in New Jersey as a Democrat and previously registered as a Democrat in New York City.

At least two of Benvenuto’s friends spoke on the record to Gerstein about their shock at the way the NYT story characterized him. One called the effort to cast Benvenuto as a Barr “stooge … just outrageous.”

The journalist who broke the story about the controversial 2016 tarmac meeting between former President Bill Clinton and then-Attorney General Loretta Lynch was found dead Saturday morning, according to police.

The body of 45-year-old Christopher Sign, a news anchor for ABC 33/40 in Birmingham, was discovered by Hoover police and fire personnel at around 8 a.m. following a 911 call about a person down in a residence in Alabama, according to AL.com.

I wonder how many bullets he fired into the back of his own head?