AllahPundit at Hot Hair wonders Why is Pelosi still wasting time on trying to pass H.R. 1?

Democrats may have become prisoners of their own bullsh*t. Pelosi knows there’s no hope for H.R. 1 but she and the rest of the liberal establishment have spent so much time this year screeching about “Jim Crow” in response to election changes in red states that they can’t give up on it yet. When you spend months lying to your base to convince them that Georgia and Texas have now all but banned black people from voting, they’re going to expect a certain amount of effort in Congress to undo that. Throwing up her hands and saying “oh well” after a single op-ed by a single Dem senator ain’t gonna hack it for Pelosi. If her party had been more honest about the mild changes made in Georgia and Texas, she wouldn’t be under as much pressure to persevere.

Virginia Kruta at Da Caller, ‘I Don’t Talk About Senate Rules’: Pelosi Blocks Dana Bash’s Attempt To Get A Comment On Nuking The Filibuster. At the NYT (cited at Hot Hair), the kept conservative, Ross Douhat thinks he knows How Joe Manchin can fix the filibuster. Insty, FILIBUSTER SAFE, HILL STAFFERS SURVEY SAYS:

Roll Call’s reporting is reliably shaped by liberal assumptions, but there is often valuable and/or insightful news in its regular Capitol Insiders Survey of Hill staffers. Consider this, for example:

“Not a single Democratic aide thought senators would eliminate the legislative filibuster, and just 28 percent of them said they thought the Senate would weaken it, while 59 percent said the Senate would preserve it. Meanwhile, Republicans are confident Manchin will stand his ground, with 84 percent expecting the filibuster rule will remain.”

'Bonchie' at Red State notes how AOC Attacks Our Elections, and Accidentally Gives Dems' Game Away

Alexandria Ocasio-Cortez on H.R. 1: "We cannot rely solely on a wish of winning elections" pic.twitter.com/NQjmdMV5sK

What AOC is admitting here is what Republicans have been saying for months now about this ridiculous push to hand Washington politicians complete control over the country’s elections, from the local level to the federal level. Democrats are scared they can’t win without the built-in, supposedly temporary advantages they received from emergency orders during COVID, some of which violated the law by changing current election laws without going through the proper channels.

Jeff Lukens at AM Think, Election Fraud is an Issue that Will Not Go Away. Jim Hoft at Gateway Pundit, Developing: The Same Suspicious SQL Software Discovered in Michigan Dominion Voting Machines Was Just Found in Pennsylvania Dominion Voting Machines. Hmm. At Am Think, What Happens if the Election Audits Go Trump's Way? An excellent question. Would we ever trust elections again?

It might not be pretty. It might get seriously ugly. But these professional forensic audits are necessary. They must be done professionally and accurately. They will have a big say in who resides at 1600 Pennsylvania Avenue for the next three years. Maybe. 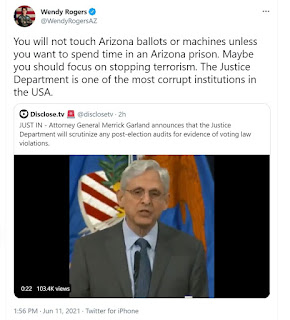 Which is why, the MSN publishes such articles as Inside the bizarre Arizona audit fueled by Trump’s false claims of election fraud. Was it so bizarre when the media recounted the results of Bush/Gore in Florida multiple times? And from Jordan Williams on Da Hill, Cheney rips Arizona election audit: 'It is an effort to subvert democracy'. She would. Also from Jim Hoft, Arizona Lawmaker Responds to AG Garland: “You Will Not Touch Arizona Ballots or Machines Unless You Want to Spend Time in Arizona Prison”

Sundance at CTH sends Arizona Senate Liaison Ken Bennett Explains The Process of Counting Duplicated Ballots. Matching the ballots that were recreated by poll workers to the original to see if they match certainly seems bizarre to me!  /sarc

Also from Jordan Davidson at Da Fed, New Video Shows Capitol Police Letting Jan. 6 Rioters Inside — And Sen. Ron Johnson Is Demanding Answers. Kyle Schidler at Am Great writes No, Director Wray, the FBI is Not ‘All In’ on Antifa/BLM Riot Cases, "Republican lawmakers were right to be skeptical of Wray’s claim that the FBI is motivated to address all domestic terrorism threats equally."
Chris Bedford at Da Fed, The Media Didn’t ‘Get It Wrong’ On Lafayette Park, They Lied To America — And They’re Still Lying. "On June 1, 2020 and afterward, corporate media didn't simply get it wrong, they flagrantly and shamelessly lied to Americans in order to hurt the president." Yep. Number 8 in Michael Goodwin's (NYPo) My Top 10 media lies. A lot of old favorites there. Sharyl Attkisson at her own site, (READ) Donald Trump statement: I was right all along.
Posted by Fritz at 9:45 AM