We're still talking about how a Whistleblower Comes Forward to Tell Fox News Host What the NSA Is Allegedly Doing To Him (Matt Vespa, Town Hall). Mediaite is skeptical,  Tucker Carlson Claims the NSA is Monitoring His Communications ‘In an Attempt to Take This Show Off the Air’ and finds people who agree. AllahPundit at Hot Hair is also a doubter, Will Fox's news division investigate Tucker's claim that the NSA is preparing to leak his private communications? This will unrefurbish his conservative credentials. Virginia Kruta at Da Caller notes  the Psaki Refuses To Answer Question On Tucker Carlson’s Spying Claim: The NSA ‘Focuses On Foreign Threats’. That's the theory, anyway. Even NCIS doesn't think that's true. And we know from Russiagate that countless counter examples exist. NT, BREAKING: Tucker responds to NSA who is spying on him

"We made a very straightforward claim: NSA has read my private emails without my permission... Tonight's statement from the NSA does not deny that instead it comes with this non-sequitur: Tucker Carlson has never been an intel target."

Also at Da Caller, NSA Responds To Tucker Carlson, Claims He ‘Has Never Been An Intelligence Target’

Carlson responded to the NSA’s statement on his show Tuesday night. He said he was “glad to know” that he wasn’t an “intelligence target” but still asked if the Biden administration had read his personal emails. The Fox News host said he spoke to NSA officials directly and they “refused to explain why they couldn’t answer that simple question.”

Sundance at CTH, NSA Responds to Tucker Carlson Claim of Surveillance, The Generic and Very Political Non-Denial Should Alarm Everyone

Techno Fog noted something most of us would also note {SEE HERE} the NSA statement is an obtuse non-denial. However, there’s a lot more in that statement that should alarm everyone. I don’t know if I can cover it all here; this is actually serendipitous for a larger framework article I have been working on. But here’s some top-line initial reactions.

First, notice the time of the tweet message. Exactly 8:00pm to coincide with the beginning of Tucker Carlson’s broadcast. That’s typical political operative snark, which wouldn’t be too surprising if it were not the fact this is from the actual National Security Agency.

Second, “Tucker Carlson has never been an intelligence target of the agency“, is akin to the NSA previously saying none of the 17 Republican candidates in the 2016 presidential race were “officially” targets of metadata surveillance; the surveillance just happened because, well, it was rogue contractors from our partner agency (FBI) using the facilitation of the NSA database for their opposition research. Oh, well, if that’s all it was… and not official NSA conduct… then, well, okay, move along. Or something.

And could this be related? Top Pentagon Cyber Official Probed Over Disclosure Concerns

Katie Arrington, chief information security officer for the Pentagon’s acquisition and sustainment office, was informed May 11 that “her security clearance for access to classified information is being suspended” as “a result of a reported Unauthorized Disclosure of Classified Information and subsequent removal of access by the National Security Agency,” according to a memo made available to Bloomberg News.
. . .
Arrington is a former two-term Republican state representative from South Carolina who ran an unsuccessful campaign for Congress in 2018 that emphasized her private-sector cyber experience. She was brought into the Pentagon in 2019 under the category of “Highly Qualified Expert” and later competed for and attained the nonpartisan Senior Executive Service status, Zaid said.

And speaking of funny business with elections, via In The Mailbox: 06.29.21, the Weasel Zippers are amused  NYC Mayoral Candidate Raises Concerns After 100,000 Votes “Suddenly Appear”. Thomas Lifson at Am Think thinks the NY mayor’s race is in ‘chaos’ as 135,000 extra votes show up. AllahPundit want to Stop the steal: NYC mayoral frontrunner hints at election chicanery as lead slips during ranked-choice voting count. But the mystery was solved when it was discovered that BOE botched NYC mayoral primary results by including ‘test’ run (NYPo) and NYT notes (cited at Hot Hair) that NYC mayor's race in chaos after elections board counts 135,000 test ballots. Oops! These things happen. But of course, they never happen to Republicans! NYPo Ed Board calls New York’s Board of Elections a travesty. Insty catches some Democrat hypocrisy on the issue in PAST PERFORMANCE IS NO GUARANTEE OF FUTURE RESULTS . . .

At Da Wire, Another Unarmed Trump-Supporting Grandma Charged In Jan 6 Capitol Breach. 'Shipwreckedcrew' at Red State explains The Emerging Reality Is the Biden Justice Department Will Charge Everyone It Can Identify for Capitol Protests

That means that anyone who attended the January 6 protest and went inside the Capitol, but has not yet been charged, will wake up every morning until the statute of limitations expires and wonder, “Will today be the day the Democrat Justice Department arrests me because I protested the election of Joe Biden?”

The argument could be made that, having opted to go down this path early on, the Democrat Justice Department needs to continue to identify and bring charges simply as a matter of even-handedness. Suspects whose identity has been harder to come by should not benefit by avoiding prosecution compared to individuals who the FBI was able to identify in the days and weeks that followed January 6.

While that might be true, the heavy-handed policy of “no exceptions” which is being followed only ensures that the damage to the country created by political divisions which exist will only get worse. It is a statement by the Biden Administration that it intends to criminalize to the greatest extent allowed by law the sentiment following the 2020 election that the outcome was not legitimate.

More significantly, it is a legitimate basis upon which the segment of the population who politically oppose the Biden Administration can reasonably claim the Administration is employing the criminal justice system to delegitimize that political opposition by declaring it to be based in criminality. 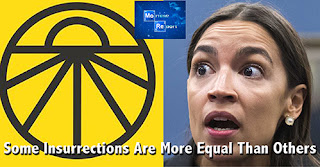 In today's Morning Report at Ace's JJ Sefton noted another violent protest just occurred in Washington DC, and nobody cared, because it was left wing:


First up, one wonders whether or not Titty Caca Ocasio-Cortez had such severe flashbacks from January 6th that they caused Malig-Nancy Pelosi to soil her 18-Million-Year Girdle:


A group calling themselves "Sunrise Movement" created what some people might deem an insurrection. Fortunately, none were wearing MAGA hats so no unarmed protestors were shot by mystery guards. Dozens were supposedly arrested . . .

. . . New York's uber-progressive Rep. Jamaal Bowman just couldn't pass up a chance to do some race-baiting, and graciously dropped an "F" bomb to let us know he means it:

"They occupy our streets. They mass incarcerate us, but they leave us food insecure, in transportation deserts, and our buildings and schools falling apart. Fuck that!" Bowman said at the event while speaking about the history of discrimination against black people. "We've got to go big, and take it to another level. And this is our moment. This is the moment" . . .

. . . Sunrise Movement is allegedly funded by Comrade George Soros. They blocked all 10 entrances to the White House and bellowed their demands. No reports of tear gas, pepper spray, firearms, or batons being used on the potential green panther insurrectionists.

Meanwhile, dozens of decent, G-d-fearing people who showed up to the Capitol to lawfully protest the certification of a stolen national election are languishing in jails and having their lives destroyed by what amounts to an American Gestapo of the DoJ/FBI as punishment for daring to object to the overthrow of the former United States of America.

“Last year, organized cells of criminals hijacked overwhelmingly peaceful protests and used the legitimate grievances of others as cover to commit horrific acts of violence,” Mace said in a statement. “They caused billions of dollars in property damage and attacked law enforcement officers and innocent bystanders in cities across the country.”

“These riots often caused the most harm to the marginalized communities the criminals claimed to represent,” Mace added. “Antifa bands represent the same threat to our nation posed by other terrorist groups. We must do all we can to understand and neutralize this dangerous movement before more are harmed.”

From atop Da Hill, Pence faces fierce resistance from GOP's pro-Trump base “He’s never going to run for president and be successful" and I'm OK with that. Pence is a nice enough guy, but he's not presidential material.
More properly Russiagate, but fitting in with the election theme of two levels of justice, from Ace, Kevin Clinesmith, the Corrupt FBI Lawyer Who Forged Documents to Frame an Innocent Man, May Get His Law License Back on July 19

A Ruling Class judge first gave this corrupt government official, who forged a document in order to frame a man, then entered that forgery into evidence in a FISA hearing, no jail time at all. The judge's excuse? Well, this criminal lost his job. And might lose his law license. Isn't that punishment enough?

"[He] lost his job, and his government service is what has given his life much of its meaning," Boasberg said Friday. "He was also earning $150,000 a year and who knows where the earnings go now. He may be disbarred or suspended from the practice of law, you may never be able to work in the national security field again. These are substantial penalties."

I think the average street criminal would be surprised to learn that losing your job due to a crime, and maybe losing your Ruling Class Credential of a law license, is punishment enough.

And now -- about that losing his law license part. He lost it for just one year. The suspension is dated retroactively to August 2020.

And now he'll petition to have it reinstated.

The Government Clique really looks out for its own, doesn't it?

But, keep those Grandmas in jail, they're threats!