Election 2020: How Many FBI Agents Invaded the Capitol on Jan. 6?

Revolver raises the interesting question of how many FBI or other federal agents participated in the Jan.6 Capitol Incursion. Unindicted Co-Conspirators in 1/6 Cases Raise Disturbing Questions of Federal Foreknowledge. If the past is any guide, about 1/3 of the people planning domestic violence are undercover federal agents. The fact that there are a number of unindicted co-conspirators for the Jan. 6th suggests this may well be true here as well. This is a good article despite an annoying format. Read it.

Revolver News is willing to address the matter directly in the following three questions:

PM, WATCH: Tucker Carlson says Capitol riot is being weaponized to punish Biden's political enemies. Yep.
Well, it was a great rant until Fox blocked it.

Sundance, Tucker Carlson Outlines The Primary Threat to Our Nation, The Corrupt Intelligence Apparatus Which Includes The FBI. Andrea Widburg at Am Think thinks Democrats are waging war on conservatives, and January 6 is their chief weapon.  Wapoo, Army generals defend federal response to Jan. 6 riot "Generals cast military response to Capitol riot as an ‘unforeseen’ change in mission" and House, Senate strike deal to give Congressional Gold Medal to all officers who responded on Jan. 6, not just Goodman Including the one who shot Ashli Babbitt.  WaPoo whines that Paul Gosar demands name of Capitol officer who killed rioter Ashli Babbitt, saying she was ‘executed’
Troll Level Grand Master, 'shipwreckedcrew' at Red State reports, Vladimir Putin Asks NBC News Who Ordered the Assassination of Ashli Babbitt by the Capitol Police, and from Matt Margolis at PJ Media, Putin Blames U.S. Government for 'Assassination' of Ashli Babbitt During Capitol Riot.
From Stacy McCain, Are You a Terrorist Threat? Do You Spread ‘Malicious Content Online’?. Probably.

If we’re going to start pointing fingers at “extremists,” what about you? Or me? Who among us is safe from the shadow of suspicion?


President Joe Biden’s administration announced their plans to create ways for Americans to report radicalized friends and family to the government, in an effort to fight domestic terrorism.
In a conversation with reporters, one senior administration official explained the importance of stopping politically fueled violence before it started.
“We will work to improve public awareness of federal resources to address concerning or threatening behavior before violence occurs,” the official said.
The official cited the Department of Homeland Security’s “If you see something say something” campaign to help stop radical Islamic terror as a domestic possibility.
“This involves creating contexts in which those who are family members or friends or co-workers know that there are pathways and avenues to raise concerns and seek help for those who they have perceived to be radicalizing and potentially radicalizing towards violence,” the official said.
Biden began his presidency with a stark warning in his inauguration speech about the “rise in political extremism, white supremacy, domestic terrorism that we must confront and we will defeat.” On June 1, Biden described the threat from “white supremacy” as the “most lethal threat to the homeland today.”
The Biden administration said it would also work with large technology companies on “increased information sharing” to help combat radicalization.
“Any particular tech company often knows its own platform very well,” the official noted. “But the government sees things — actually, threats of violence — across platforms. They see the relationship between online recruitment, radicalization, and violence in the physical world.”
The Department of Homeland Security also plans to deploy “digital literacy” and “digital fitness” programs to help combat “malicious content online that bad actors deliberately try to disseminate.”

Are you encouraging skepticism toward the Biden administration’s policies? That’s “malicious content,” you extremist! Got a Trump bumper sticker on your car? Your neighbors will rat you out to the Department of Homeland Security, because obviously that’s “threatening behavior.”

Breitbart, Georgia Secretary of State Announces Investigation of Fulton County over Missing Ballot Forms. Well, it could be an innocent mistake.

Georgia Secretary of State Brad Raffensperger tweeted Monday that Fulton County is under investigation by his office for its inability to produce ballot drop box transfer forms for absentee ballots from the November 3, 2020, general election.

The investigation follows a lengthy piece by the Georgia Star News, in which a Fulton County election official admitted that “a few forms are missing” and that “some procedural paperwork may have been misplaced.” 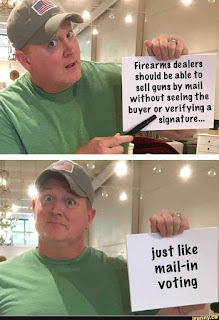 They strip away any need of the fraudster presenting himself personally to vote, where there is a small chance his fraud would be noted. It's hard for a 30 year old fraudster to pass himself off as a 95 year old (deceased) person.

And requiring in-person voting reduces how much fraud can happen: Each criminal is limited by the time it takes to vote. He can go to different voting stations each time claiming to be a different deceased or out-of-state person, but even working a full day, he could probably only cast ten or twelve illegal votes.

But with drop boxes, he can fill out hundreds of fraudulent votes in a night and then drop them off en masse. Maybe split the ballots among ten boxes to keep it from being too obvious.

And Fulton County didn't even bother with the most minimal paperwork about these fraud boxes:

And the Bulwark Girlz warn Get Ready for the Shitstorm That Will Follow the Arizona “Recount”
Via the Wombat's In The Mailbox: 06.15.21, The Geller Report has President Trump – “Media Now Admitting I Was Right About All The Stuff They Lied About”. How much time do you have?

Politico asks Why Mike Lindell Can’t Stop, "The MyPillow tycoon has lost business pumping up Trump conspiracy theories, and probably lost his chance at a political future. But he believes he’s on a divine mission to overturn the election—and he’s not alone." Maybe he believes it's more important than money.