Tucker Carlson's rant about possible FBI (or other Federal agents) involvement in the Jan. 6 Capitol incursion has been good for business. Allahpundit, quick to demean Tucker: What if FBI operatives actually organized the insurrection?, points out that unindicted co-conspirators are, almost by definition, not federal agents (agents would never be charged), and are far more likely to be participants in the incursion who have made deals with the prosecution for some reason or another. And yet, the point still stands; in almost every case of so called right-wing extremism taken to court, undercover FBI agents or other federal officers have played a prominent role, acting as agents provocateurs, bordering on, or arguably creeping past the line on entrapment. It's unlikely the same is not true here. JB Shurk at Am Think thinks The FBI's role in the Jan. 6 Capitol fracas is absolutely disgusting. Bad Blue has a good number of related tweets in Top 20 Tweets from BadBlue Tonight, 06.16.21: "Felony Bureau of Insurrections" Edition, an example:

FBI concocted the "plot" to "kidnap" Whitmer, had their operatives act as kidnappers, and found a bunch of moron patsies they then labeled as Trump supporters and conservatives.

It appears they did the exact same thing on Jan 6th.

Time to abolish the FBI.

Sundance at CTH: The Tucker Carlson Solution to Deal With a Corrupt Intelligence Apparatus and FBI Will Not Work, Here’s Why


On Tuesday night Carlson and Darren Beattie suggested some form of senate Church Committee 2.0 should be initiated in order to investigate the U.S. intelligence community, and specifically the FBI for their role in coordinating or facilitating the January 6th events. On Wednesday night Carlson again recommended the U.S. congress should start investigating.

Putting aside the background motives of Tucker Carlson; and accepting he is making these recommendations in good faith; there is a fatal flaw in his suggestion – and the support from anyone else who would suggest the same or similar approach. The fatal flaw is an obvious one that unfortunately too many people just will not, and cannot, accept….

The Legislative Branch of the federal government is part of the Intelligence Community corruption. The oversight “gang of eight” (pictured above), are enablers and participants in the corrupt endeavors that Carlson wants them to investigate.

NYT (cited at Hot Hair), FBI is pursuing "hundreds" in Capitol riot probe, Wray tells CongressIs he brain-dead or just uninformed? Da Mail notices Joe Biden falsely claims 'criminal' US Capitol rioters 'killed' cop Brian Sicknick despite DC's medical examiner ruling he died of natural causes, but I'm sure Glenn Kessler will not add it to the list of Biden's lies that he's not keeping. CNS News, Nancy Pelosi: ‘January 6th Was Unquestionably One of the Darkest Days in the History of Our Democracy” That you pissed off enough people to want to take that action? Yes. Atop Da Hill, Cheney: 'It is disgusting and despicable' to see Gosar 'lie' about Jan. 6 Buhwudabout Biden? Da Beast is upset that First He Was a Capitol Rioter. Now He Wants to Be Governor of Nevada. "Nevada attorney and former boxing champion Joey Gilbert climbed the Capitol steps on Jan. 6 and called out to Alex Jones. Now he’s running to be Nevada’s next governor." Climbed the Capitol steps? WATCH: Putin criticizes US detainment of Capitol rioters after meeting with Biden, ""One of them was just shot on the spot, and unarmed, as well," Putin said, referring to Ashli Babbitt, who was shot by Capitol Police on Jan. 6." If you don't want it used against you, maybe you shouldn't do it.

Human Events reports Pentagon Will Train Departing Military Service Members to Resist Recruitment by Extremists, or could it be  that  "Recruitment by Extremists" will turn out to be conservatives. At Am Great Pedro Gonsalez discusses The Origins of Domestic Extremism, "The ruling class is the real source of domestic extremism, and through force, fraud, and terror it continues to impose its will over Americans."

Sen. Joe Manchin has been one of just two Democrats, along with Kyrsten Sinema, to continually say that they aren’t open to abolishing the filibuster. To this point, the filibuster has stood in the way of Democrats seeking to pass all manner of insane bills. Previously, I opined that Sinema seemed more resolute than Manchin regarding her position. Well, that may have been a good bet on my part.

A leaked phone call between Joe Manchin and a political advocacy group reveals the machinations being attempted by the West Virginian senator behind the scenes. Not only is Manchin signaling he’s open to abolishing the filibuster, but he’s also targeting specific Republicans to try to get the so-called January 6th commission passed. 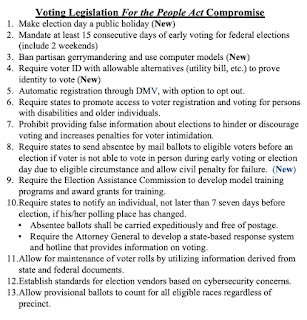 AllahPundit calls it a possible Gamechanger? Manchin floats grand bargain on voting rights -- including mandatory voter ID. "Here’s the meat of it. What do we think of this?" I still think voting should be the state's business.

Insty, writing at RCP wants it to be Easy to Vote, Hard to Cheat. A good goal.

America’s voting system is in trouble. To do its job, it needs to produce clear and trustworthy outcomes. It’s not enough to produce a winner and loser. The losers have to believe that they lost fair and square, and the public has to have enough confidence in the system to be skeptical when sore losers claim fraud.

We don’t have that right now. To get there, we need paper ballots, voter ID, and open counting – plus a bit of self-restraint among our political class. Across much of America, voting is now done by computerized devices. Computers have many advantages: They’re fast, they’re easy to program (compared with changing printed ballots), and they produce rapid results that can be quickly reported.

But they also have problems. One is that to trust a computer, you have to trust the people who wrote its software, and everyone else who may have had an opportunity to change that software. Devices that connect to the Internet also raise the risk that people on the other side of the world might change the software or the results.

Since 2020, such worries have often been dismissed as right-wing propaganda, but just before the election USA Today published a roundup of concerns about electronic voting that cited numerous computer scientists. Conclusion: “All election systems are for the most part black boxes: proprietary software and hardware jealously guarded by the handful of companies selling them. But state reviews and court cases opening up DRE [direct-recording electronic] systems of all makes and models for examination have for years flagged problems.”

“The whole community of computer scientists is mystified why election officials will not listen to experts about technology but will listen to the vendors” selling and maintaining it, said computer scientist Duncan Buell of the University of South Carolina.

The Political Insider (TPI) Stacey Abrams Outrageously Claims ‘The Insurrection Is Continuing’ With GOP Voting Laws. Still. The amazing thing is how loose Democrats are with words.

The Morning Consult (cited at Hot Hair), Poll: 51% of Republicans expect change in election outcome from ballot reviews. Count me in the 49%.

Also from 'Bonchie', Results of Georgia Special Elections Have Democrats on Edge

At JTN, Trump to campaign next week for GOP candidate trying to oust Rep. Gonzalez, who voted to impeach, "Gonzales in among 10 congressional Republicans who voted to impeach Trump after Jan. 6." Votes have consequences. Look at the html link: "Trump schedule first official stop revenge tour."