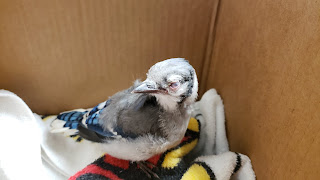 At least if you live in Maryland, Northern Virginia,  or DC. I saw this a few days ago on a Facebook group, but here it is from WaPoo,  : Public urged to stop feeding birds as scientists hunt cause of mysterious ailment "Hundreds of birds have been found in the Washington region blinded, sickened or dead since May"


People should refrain from feeding birds until scientists determine the cause of a mysterious ailment that has blinded and killed hundreds of birds in Maryland, Virginia and the District since at least late May, a federal agency said Monday.

The U.S. Geological Survey, acting on behalf of several state agencies in the Washington region, urged the precautionary step as reports of sickened and dying birds continue to increase across the region. Birds congregate at feeders, which could accelerate the spread of whatever is impacting them, officials said.

Area residents have described finding birds whose eyes are swollen, encrusted or oozing discharges. Some show neurological symptoms: They have tremors, hold their heads at a tilt or have trouble balancing and walking.

Reports have come in from southern Maryland, the District and across Northern Virginia into the West Virginia Panhandle, officials said.

“This is significant because it seems to be pretty widespread, and also it’s extending for a pretty good period of time. And it’s continuing,” said Megan Kirchgessner, a veterinarian with Virginia’s Department of Wildlife Resources, who said at least 325 reports of ailing birds have been collected. She said the ailment appears to be confined only to birds, not other animals, and to fledglings of two species, grackles and blue jays.

There is no evidence that the ailment is transmissible to humans or other animals, but the agency urged people to take basic precautions to prevent the possible spread of disease by not handling sickened birds, keeping pets away and cleaning bird feeders with bleach. It also urged people to wear disposable gloves if necessary to handle a sickened bird or remove a carcass.

In the meantime, scientists at a number of laboratories, including the USGS National Wildlife Health Center, the University of Georgia’s Southeastern Cooperative Wildlife Disease Study and the University of Pennsylvania’s Wildlife Futures Program, have been trying to determine the cause of the ailment.