First, some continued discussion of President** Biden's insinuation that the next time the right tries "insurrection", it will be dealt with using F15s and nuclear weapons. Matt Margolis at PJ Media, Did Joe Biden Threaten American Gun Owners With F-15s and Nuclear Weapons? Because it sure sounded that way. Ace, Joe Biden Low-Key Threatens to Nuke Anyone Who Disputes the Government "I'll take mean tweets over whatever the hell this is". Anders Hagstrom at Da Caller, ‘You Need F-15s And Maybe Some Nuclear Weapons’: Biden Dismisses Idea You Need Guns To Protect Yourself From Government. Insty, JOE BIDEN: NOO-KU-LAR COMBAT, TOE-TO-TOE WITH THE RED STATES!  “It has been edifying to learn over the course of the last 24 hours that in the view of this administration, the military exists primarily to serve two functions: social engineering via CRT education, and nuking Americans who have guns,” Ben Shapiro adds. And understatement from Roger Kimball at Spectator World. Joe Biden is not Mr Normality, "His comments on guns show how far removed he is from the average American"  'Bonchie' at Red State, Biden Threatens to Nuke Americans but Manages to Blow Up a Big Democrat Narrative Instead 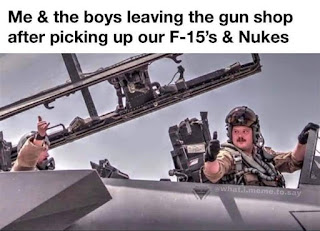 Regardless, it was something else that stuck out to me while watching Biden rant about things he has no knowledge of. Namely, that what he’s saying blows up the Democrats’ January 6th narrative.

Stick with me here. If Biden and his party truly believe the government is so all-powerful that any possible rebellion would be put down with ease, then how does that square with their claims that our “democracy” was on the brink of destruction on January 6th because some unarmed people took selfies in Pelosi’s office? Either our system of government is so fragile that a dude in horns and facepaint can threaten its existence, or it’s so untouchable that the government would just nuke anyone who got within a mile of doing any harm to it. Which is it? Because it can’t be both.

Are you starting to see how the Democrats’ views on guns and government power shift on a dime in order to sustain their political narratives?

The truth is that if enough Americans felt the government had become tyrannical and rose up against it with arms protected by the Second Amendment, things would be a lot more complicated and gray than “well, the military has nukes.” We’ve seen that reality play out in foreign countries many times. Further, the very fact that Biden would threaten such is yet more proof the Second Amendment must be protected.

Going back to January 6th, as I’ve said several times before, there was no insurrection or imminent danger to our system of government. To pretend that for partisan gain was always pure hysteria mixed with cynicism. I’m just glad Biden came out and made that clear, even if he didn’t realize it.

And speaking of the "Grand Insurrection", the first guilty plea has been announced. WaPoo, In sentencing regretful Capitol protester, federal judge rebukes Republicans

U.S. District Judge Royce C. Lamberth castigated Republican lawmakers on Wednesday for downplaying the violence of the mob that stormed the Capitol on Jan. 6, saying in handing down the first sentence to a charged defendant that those who break the law must pay a penalty.

“I’m especially troubled by the accounts of some members of Congress that January 6 was just a day of tourists walking through the Capitol,” he said. “I don’t know what planet they were on. . . . This was not a peaceful demonstration. It was not an accident that it turned violent; it was intended to halt the very functioning of our government.”

The 49-year-old Indiana woman before him, who had just pleaded guilty to a misdemeanor count of demonstrating inside the Capitol, did not disagree.

Although the day after the riot Anna Morgan-Lloyd described Jan. 6 as “the most exciting day of my life,” in court she expressed regret and contrition.

“I went there to support . . . President Trump peacefully,” she said. “I’m ashamed that it became a savage display of violence that day. . . . It was never my intent to be a part of something that’s so disgraceful to our American people and so disgraceful to our country. I just want to apologize.”

Lamberth credited Morgan-Lloyd for her early cooperation and admission of guilt, expressing frustration with both defendants and observers who argue that the riot was merely a political protest. He sentenced her to three years of probation.

So now we can charge all the various Democrat protesters at Congress? From the Wombat's In The Mailbox: 06.24.21 (Afternoon Edition)  Don Surber, Court calls the "insurrection" parading and a reminder.

Arrested is too strong a word, because the story said, "Capitol Police said they arrested 302 people during the demonstrations. Video from the scene shows the two actresses being detained after an officer asks if they want to be arrested."

I don't think they asked Grandma Morgan-Lloyd if she wanted to be arrested.

And Capitol Police did not kill any of the demonstrators in 2018.

Yes, he attended then-President Donald Trump’s rally in Washington, DC, on Jan. 6, but he never entered the Capitol. He was in a friend’s room at the JW Marriott a 30-minute walk away when the Capitol breach occurred.

Nonetheless, he was raided in February by the FBI anti-terrorism task force, handcuffed, paraded and detained for three hours while his apartment was ransacked and all his devices confiscated. Four months later, he hasn’t been charged and doesn’t have his devices back, but his neighbors are shunning him, and he’s had two strokes from the stress.

“It’s destroyed my reputation,” he says. “I’m not a violent invader … I do not condone the criminality and violence on [Jan. 6] whatsoever.”

The FBI told Bolanos he was raided because of a tip to the Jan. 6 hotline from a neighbor who said he had overheard him “boasting” about being at the Capitol.

Insty, THAT’S WHO THEY ARE, THAT’S WHAT THEY DO: FBI tears innocent New Yorker’s life into shreds after Jan. 6. "Keep this up and people will decide the Jan. 6 “insurrection” didn’t go far enough." Wapoo whines, Pence defends his Jan. 6 actions in speech that also likened Trump to Reagan

WaPoo, Pelosi announces a select committee will investigate Jan. 6 attack on the Capitol by a pro-Trump mob LI, Pelosi Will Establish Select Committee of Democrats to Investigate Capitol Hill Riot, "Pelosi continues to lie about deaths and injuries associated with the January 6th riot." Da Blaze, Pelosi announces House select committee to investigate Jan. 6 riot "Pelosi did not announce who will lead the committee or name the Democrats she will appoint to serve on it." Sundance at CTH, As Expected Political Pelosi Announces January 6th Select Committee to Support Mid-Term Election Roadmap

CNS News, Failure of Democrats' H.R. 1 Spurs Louder Calls to Scrap the Filibuster and Sen. Mike Lee on H.R. 1: 'This Bill Was Written in Hell by the Devil Himself'. The I&I board, The Republic Is Preserved – But The Democrats Will Try Insurrection Again.

At TNP, 55% Support Election Audits, 1 In 10 Democrats Say Biden Did NOT Win Fairly. and from the Wombat's In The Mailbox: 06.24.21 (Afternoon Edition) Warner Todd Huston at Da Lid, Poll: Non-Whites Support Voter ID Even More Than Caucasians, "An Amazing New Poll Has Revealed That Non-White Americans Support Voter ID Requirements Even More Than Their Whites. They know cheating can be used against them, too.

Superior Court Judge Brian Amero on Thursday dismissed seven of the lawsuit’s nine claims against Fulton County officials on the basis of Georgia’s sovereign immunity laws. Amero did not dismiss two counts in the lawsuit that sought digital images of the mail-in ballots through the state’s open records law.

If the Fulton County board of elections is not responsible for the way the ballot counting was handled, it seems challenging to identify a specific member of that board who would be responsible. I’m not a lawyer, but that’s the way the defense argument seems to be framed.

The bottom line in this private civil lawsuit is the harm needs to be identified in order for the discovery, the actual inspection of the 147,000 absentee ballots, to be conducted. The plaintiff is alleging harm based on the sworn depositions of election workers. However, the defense is telling the court that a specific person will need to be identified as responsible for the alleged fraud the election workers are claiming to have witnessed. This is a typical Lawfare catch-22.

The solution for this is obviously the Georgia Senate ordering an audit of those ballots via a legislative subpoena. However, it doesn’t appear the Georgia legislature has taken any steps toward that goal.

I may be wrong, but I am less optimistic now than before.

Regarding Maricopa County, Arizona, at Am Great, Dylan Johnson asserts The ‘Party of Science’ Can’t Do Math, "The Maricopa County election audit is necessary and there’s no legitimate logical reason for anyone to oppose it." 2+2 =5 when the party needs it to be.

While it’s unclear what might happen if these audits prove that the 2020 election was fraudulent, one simple reality remains: if election officials in these places didn’t know how insecure their elections were, they were criminally negligent. If they knew and chose to ignore it, they are simply criminals.

The punishment of dissenters goes on as WaPoo proudly announces  Giuliani’s N.Y. law license suspended in connection with efforts to overturn 2020 election. Why would anyone think a panel of NY judges were objective?

Retired judges John Leventhal and Barry Kamins, who are representing Giuliani in the disciplinary proceeding, issued a joint statement defending him. “This is unprecedented as we believe that our client does not pose a present danger to the public interest,” it says. “We believe that once the issues are fully explored at a hearing Mr. Giuliani will be reinstated as a valued member of the legal profession that he has served so well in his many capacities for so many years.”

Stacey Lennox at PJ Media, Army Finally Defines 'Extremism' When It Comes to Screening Out 'Hate Group' Members. Are you now, or have you ever been a Trump supporter? It's not quite that obvious.

While potential recruits are asked to respond regarding any association with a “hate or extremist group,” the definition of extremism applies to an individual’s advocacy of particular beliefs. This dichotomy appears to imply that the Army is more concerned with personal views. It is also apparent how these descriptions can screen out those with a different political ideology than the current administration.

Has an applicant ever said that biological men cannot become women, that transwomen should not be allowed to compete in women’s sports, or that medical transition of children is a bad idea? Does an applicant believe that a child is better off being raised by a mother and father? Does he or she support the recent Supreme Court decision regarding Catholic foster care agencies? Look out for number one.

If a potential recruit is an immigration hawk who advocates for border security, uses the term “illegal immigrant,” and believes that the government should deport those here illegally, is that engaging in discrimination? Again, these are legitimate policy positions that the Left views as bigoted and xenophobic, which is problematic under point number two.

These are legitimate positions in contentious policy debates nationwide, but Democrats and the Left consider them hateful, bigoted, and discriminatory. The current commander in chief has certainly made statements to this effect.