At least $300 million in emergency funds intended to help struggling renters in the Washington area remain unspent even as a federal ban on evictions is set to expire at the end of this month, according to a Washington Post analysis.

D.C., Maryland and Virginia received funding as part of $46.6 billion in emergency rental aid approved by Congress in December and March for distribution nationwide. Treasury Department officials issued guidelines saying the aid is meant for “renters most desperately in need of assistance to avoid evictions and secure housing stability.”

But as of May 5 — more than four months after Congress approved the first round of funds — five of the 15 nearby counties, including the most populous counties in Maryland and Virginia, had not sent any federal money to renters. The District has spent $10.5 million of the first $200 million it has been allocated on tenants at risk of eviction, about 5 percent as of May 30.

I was curious about my county, Calvert, and the paper's table takes care of that: 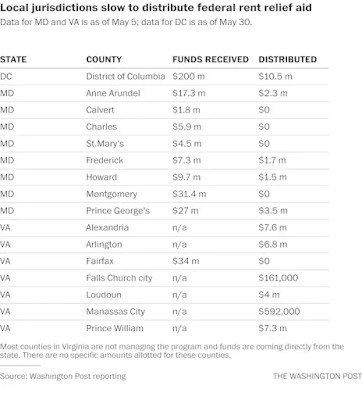 Zero of the $1.8 million allocated to Calvert has been spent! I wonder what the hold up has been, lack of county workers dedicated to the job (entirely possible, it probably would demand the creation of a new office at time when local governments are already stressed, and most existing workers have been "working" from home.

My guess would be that it would be easy to find enough people negatively impacted by the WuFlu that owe back rent to spend $1.8 million. I know many people stopped paying for water when Gov. Hogan declared we could not shut down service for lack of payment. However, once that restriction was lifted, though, a shocking number discovered the wherewithal to pay. My guess that something similar is going on with rents.

Maybe Calvert and other jurisdictions are waiting for this to shake out before stepping in and paying for those who really can't after the rent moratorium expires. That would be rational, rather than pushing out the door to the first $1.8 millions worth that applied.

OK, that made too much sense. Here's what really happened:

Officials in Calvert County, a jurisdiction where officials say 17 percent of residents are renters, have been receiving applications for assistance since late last year. They said Maryland officials notified them in mid-March they would be eligible for up to $1.8 million in relief through the Treasury-funded program, and although the state has not yet provided those funds as of June 1, the county has begun the program with its own money and the expectation it will be reimbursed.

So, even though Maryland has the money, they haven't yet distributed it yet to the smaller, redder counties.
Posted by Fritz at 1:58 PM