Justice Department officials announced a federal lawsuit Friday against Georgia over new statewide voting restrictions that federal authorities allege purposefully discriminate against Black Americans, the first major action by the Biden administration to confront what it describes as efforts by Republican-led jurisdictions to limit election turnout.

The legal challenge takes aim at Georgia’s Election Integrity Act, which was passed in March by the state legislature and signed into law by Gov. Brian Kemp (R). The law imposes new limits on the use of absentee ballots, makes it a crime for outside groups to provide food and water to voters waiting at polling stations, and hands greater control over election administration to the legislature.

Georgia is very important to the corrupt agents within federal institutions. The leftist activists have worked methodically to use Georgia as a key battleground in their efforts to continue manipulating election outcomes.

The DOJ is worried, very worried, that as people wake up to the scale of election fraud perpetrated upon this nation more states will begin enacting laws that will block voter fraud.

The DOJ civil rights division does not want their gains in Georgia to be lost in the same way those , schemes collapsed in Florida over the past four years. Strong laws that require voter ID to verify the validity of a person to vote are antithetical to the fraud Washington DC needs in order to control the U.S. government.

Of course, the real issue is whether states are allowed to manage their own elections in way that are not favorable to Wannabe Lairds in Washington. Also from Georgia,  from JTN, In Georgia’s largest county, 'an army of temps' oversaw an election rife with security issues "Fulton County has used personnel agencies for years."

They were doing things eagerly but incorrectly."

That was a judgment rendered in a Georgia election monitor's report last year detailing what the investigator said were a series of problems brought on by improperly trained temporary staffers handling the absentee ballot scanning operation in Fulton County.

Stu Cvrk at Red State has another roundup of audit progress at A.U.D.I.T. of Elections: Is the Dam Breaking? I wouldn't say breaking, but leaking a little, maybe. Good article.

From Stacy Lennox at PJ Media explores how  As S1 Goes Down in Flames, What Can Republicans Learn About Defeating Other Radical Legislation? and Ken Blackwell at CNS News explains why The Left’s Next Voting Bill Is Even Worse Than HR 1. 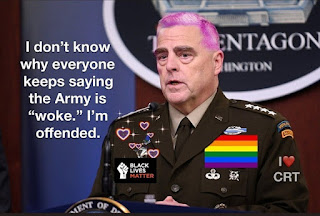 Ace, Woke General: We Have to Indoctrinate Our Troops in Marxist Critical Race Theory So We Can Understand Our Nation; The January 6 Incident Was Borne of "White Rage". Insty, J.D. VANCE IS RIGHT:

I personally would like American generals to read less about “white rage” (whatever that is) and more about “not losing wars.”

On President** Biden's veiled threat to use F15s and nukes against political enemies, also from Insty, BECAUSE THEY’RE FULL OF HATE AND DRUNK ON POWER? Why Do Dems Keep Threatening To Nuke Gun Owners?


It’s telling that so many of them are willing to do to domestic political opponents what they would have regarded as war crimes if directed at foreign enemies.

This is tyranny. This is political persecution. This is a message to everyone fighting for individual freedom. We are reaching the vanishing point.