Hundreds of people concerned about the integrity of the Nov. 2020 election gathered outside the Michigan Capitol Thursday to protest and deliver roughly 7,000 affidavits claiming fraud and demanding a forensic audit.

"If we do a deep-dive forensic audit similar to Arizona, it will do either one of two things," he said in a phone interview. "It will prove that all of the politicians who say there's nothing to see there, that they were right. Or it will prove that there's a big problem with the integrity of our elections and that we need to address it in a major way."

At one point in the document the real-time auditor reveals a temporary staffing agency Happy Faces was being used to supply counting staff. A pair were overheard in an elevator, where one asked if the other was “ready for a long night,” to which the second replied, “Yeah. I’m ready to fuck shit up.”

Led by Cyber Ninjas, which was hired by the Arizona Senate, auditors are working on evaluating ballots after finishing their ballot recount, save less than 100 braille ballots.

The ballot evaluation is supposed to wrap up by the end of June—the Senate is slated to vacate the Veterans Memorial Coliseum, where the audit is taking place, by July 1—but there will be a few weeks worth of additional work after that, Ken Bennett, a former Arizona Republican secretary of state, told The Epoch Times.

“We’ve got the remainder of June to do what we’re doing here at the coliseum. Then there’s a few weeks probably of work on checking the envelope signatures, and looking at voter registration anomalies, and this work that we want to do on the retabulation, so maybe that takes up some or most of July, and then the auditors are going to need a few to several weeks to put the report together,” said Bennett, the Arizona Senate’s liaison for the audit.

At Red State, Stu Cvrk has a weeks worth of A.U.D.I.T. of Elections: The Bombshell Revelations Continue… 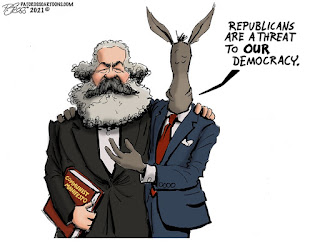 From ET, McConnell calls Manchin’s Election Reform Proposal Still ‘Rotten To The Core’. AllahPundit at Hot Air discusses Then and now: How Stacey Abrams changed her mind on voter ID. When she decided to go all in with voting fraud. JTN, New poll shows majority of Americans don't support election reforms like Dems' For The People Act

A new poll released Thursday shows a majority of likely 2022 general election voters do not support voting-reform measures like congressional Democrats' For The People Act because they include such provisions as public funding of political campaigns and ending state voter ID laws?

On the question "Are you more or less likely to support federal election reform" like the one by Capitol Hill Democrats that included the public funding and voter ID provisions, 54.8% responded less likely. Nearly 49% of those in that group said they were "much less likely" to support such measures.

PM, 'We won't shut up, and we shouldn't': Tucker Carlson wants answers on the FBI's potential involvement in the Capitol riot. From sundance's perspective, Glenn Greenwald Asks Reasonable Questions About the FBI’s Involvement in January 6th Capitol Hill Event

“If the FBI had advanced knowledge of what was being plotted yet did nothing to stop the attack, it raises numerous possibilities about why that is. It could be that they just had yet another “intelligence failure” of the kind that they claimed caused them to miss the 9/11 attack and therefore need massive new surveillance authorities, budget increases, and new Patriot-Act-type laws to fix it. It could be that they allowed the riot to happen because they did not take it seriously enough or because some of them supported the cause behind it, or because they realized that there would be benefits to the security state if it happened. Or it could be that they were using those operatives under their control to plot with, direct, and drive the attack — as they have done so many times in the past — and allowed it to happen out of either negligence or intent.”

Dan Greenfield at Front Page, Biden’s Terror Strategy Defines Republicans as the New Terrorists "If you disagree with the Democrats, you’re a “domestic terrorist.”"

The National Strategy for Countering Domestic Terrorism redefines the terrorist threat as coming first and foremost from political opponents of the Biden administration. And it defines that threat as a primarily political and ideological battle rather than a violent threat.

The new strategy doesn’t come up with any new ideas for fighting terrorism. Its ideas fall into the murky territory of preventing terror through everything from internet censorship to critical race theory. Biden is rebooting Obama’s CVE or Countering Violent Extremism program to target Americans in a battle of ideas against “misinformation” and “racism”.

At Da Wire WATCH a Fiery, Explosive Challenge To Navy Admiral For Recommending Critical Race Theory Book For Every Sailor

Linked at Pirate's Cove in the weekly Sorta Blogless Sunday Pinup and links.
Posted by Fritz at 9:20 AM