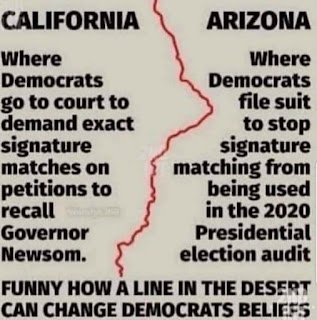 A relatively light load after the weekend.
Matt Margolis at PJ Media wonders  Is Pennsylvania on the Verge of a Forensic Election Audit? Dan Chaitin at WaEx answers, Pennsylvania poised to begin Arizona-style election audit with subpoena power


Pennsylvania appears to be on the precipice of initiating an Arizona-style audit of the 2020 election.

State Sen. David Argall, who heads a committee that oversees elections, told local news outlets he favors a forensic audit of the contest that state and federal officials insist was secure.

The Republican, under pressure by former President Donald Trump to take action, told the Capital-Star the audit is now a “very real possibility." The report said he is considering subpoenas for ballot information and has yet to decide which jurisdictions to send them.

“There are a lot of things under consideration right now, and I told them to check back in a week or two, and we hope to have some more detail,” he told the outlet after meeting with audit-supporting activists on Thursday.

It would take election changing results in Georgia, Arizona and Pennsylvania to show that Trump would have won the electoral college. We have audits going on in Georgia and Arizona that could do it, and now potentially Pennsylvania. Stephen Kruiser at PJ Media says  Audit Everything Until the Stink From Last November Is Gone

In 2018, some thought an election could be overturned and the candidate who lost could replace a subsequently removed President.

Insty, THAT WAS DIFFERENT, BECAUSE SHUT UP:
The return of Lindsey 2.0 on Fox, Graham: Dems' voting bill is 'biggest power grab' in US history, will not support Manchin compromise,"Graham said he opposes measures that would take power away from states." Kim Crockett at Am Great, Quashing H.R. 1 is Not Enough, "If H.R. 1 fails in the Senate, will Joe Manchin join a few Republicans and vote for H.R. 4 instead?"

Despite that Supreme Court ruling, H.R. 4 resurrects pre-clearance, picking up on unhinged left-wing and corporate media claims of “racist” voting laws, but this time Congress would put the entire country under the same kind of federal supervision reserved for the Jim Crow states of 1965. Does Manchin really think America is less capable of running fair elections today than in 1965?

Rick Moran at PJ Media has more on how Gov. Abbott Vetoes Funding For State Legislature, Including Lawmakers' Pay, for the Democrats fleeing the state to avoid passing a voting reform bill.

From PM, WATCH: Glenn Greenwald suggests the FBI had a role in Jan. 6 riot, exposes propaganda of CNN, MSNBC

More from Gleen Grenwalt, Questions About the FBI's Role in 1/6 Are Mocked Because the FBI Shapes Liberal Corporate Media. At Town Hall, Kurt Schlicter warns That Loudmouth Troublemaker Is An FBI Snitch. If the FBI didn't have men in the Capital on Jan. 6, they're incompetent. I think a lot of things about the FBI, but incompetence isn't one of them.
The I&I Ed. Boards calls the Jan. 6 Suspects Held Without Bail More Un-American Than Capitol Incursion. I agree. Rioting is pretty American. I see they adopted my term "Capitol Incursion." Great minds and all. Speaking of a not so great mind, Da Caller reports Maxine Waters Claims Trump Campaign Helped Organize Capitol Riot. Robert Spencer at PJ, CNN Uses Ashli Babbitt to Paint Trump Supporters As Terrorists. Trampling on her dead body. D.J Saunders at Am Spec notes Jan. 6 or June 2020 "Democrats are obsessed with the former, but most Americans likely fear the violence of the latter more."
Posted by Fritz at 9:58 AM