Twitchy, with abuse of the word decimate, ‘Hello, 9-1-1? We’d like to report a murder’: Trump attorney Michael van der Veen just DECIMATES the media during CBS interview. PM, WATCH: Trump defense lawyer slams media for covering up impeachment managers' doctored evidence, where you can watch it on Rumble. Ace, Gloves Off! This Is How It Is Done: Michael van der Veen Refuses To Accept The Media Narrative
Politifact rushes forward to explain, No, House Democrats’ impeachment video did not violate US House rules. Think about that. Using fabricated tweets, and cutting out the "peacefully demonstrate" is not against the House rules. Of course, they were using it in the Senate. Does it violate Senate rule to give false testimony to the Senate? Ask Roger Stone.
Politico, Inside Democrats' witness fiasco

When Senate Democrats stepped onto the floor on Saturday morning, they had no idea the House impeachment managers were about to drop a political grenade in their laps.

But after a brief schism that threatened to throw Donald Trump's trial into chaos, House and Senate Democrats quickly agreed to put the pin back in. . . .

Competing views. Roger Kimball at Am Great, Yes, Acquittal Is Vindication, NR Editors, Acquittal, but Not Vindication. Fox, Trump celebrates acquittal in Senate trial, foreshadows political future: 'Much to share' 'This has been yet another phase of the greatest witch hunt in the history,' Trump said. Karen Townsend at Hot Air, Two Americas, Two Statements On The Impeachment Trial: Biden Versus Trump. At the Slantic, David Frum, It’ll Do: Trump Was Acquitted, But He Still Lost
Politico whines Democrats wrestle with how to quit an acquitted Trump. Of course, what they're going to do is use prosecutorial agencies they control to go after him. CNN, Trump has privately voiced concern about being charged related to January 6 riot  Hot Air cites WSJ, New York Prosecutors Investigating Trump’s Properties. No reasonable prosecutor blah blah blah. But these aren't going to be reasonable prosecutors; they'll be Democrat hacks at both the federal and state levels. Johnny Chait, at the Intelligencer  Republican Senators Are Asking the Courts to Take Care of Trump for Them. He needs to be check for auditory hallucinations. Squish Jazz Shaw at Hot Air, Midnight Mitch: Trump Morally (But Not Legally?) Responsible For Riot. Although, it's not that far from my thoughts. It was a bad day and time to rally 100,000, because a crowd of 100,000 will contain 1,000 idiots.
Fox reports on how the Republicans who voted to convict Trump face backlash at home "Senators Toomey and Burr have already announced their retirement, however" Well, votes do have consequences. Althouse reads the NYT so you don't have to, "The blowback against the seven Republican senators who supported former President Donald J. Trump’s conviction in his impeachment trial has begun." Politico whines Party leaders rip Republicans who voted to convict Trump and that Up in '22, Murkowski readies to face impeachment vote fallout.  Chaz Cook at NR, Ben Sasse’s Conviction: Trump’s Lies Caused This. Sundance at CTH, Louisiana Republican Senator Bill Cassidy Believes Trump’s MAGA Movement is Over – Boy Are They In For A Surprise. NPR fawns After Speaking Out On Impeachment, Herrera Beutler Heads Toward Clash With Her Party 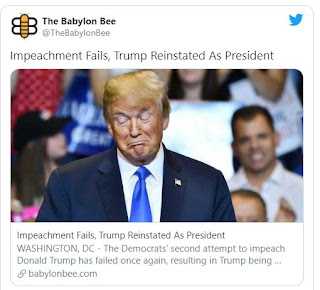 So, what comes next? CNNLOL points out all the legal nutbaggery aimed at Trump from hardcore leftists in leftist states (obviously, they didn’t put it that way, but, that’s exactly what it is). I wouldn’t be surprised if the Democrats attempted to censure Trump next week, even though this whole shampeachment seemed more like censure. Charles Hurt thinks the moonbats will try something different

The question has Wombat-socho in a fighting mood,  Get Up And Fight

I’m not quite to Ace levels of rage yet, but I’m becoming increasingly pissed off at the defeatist moaners who think the Democrats have pulled off their October Revolution and it’s all over. “The Uniparty has won,” they whine. “There’s nothing we can do.” Yes, we should all sit quietly in our houses, waiting for the blue-caps to come along and haul us off to the Alaskan death camps for being associated with friends of the supporters of the badthinking White Supremacist RAAAAACIST homophobic Bad Orange Man.

No Pasaran, The Mote in Thine Own Eye (in the Eye of the Conservative): Why Are Conservatives So Naïve That They Refuse to See the Beam in the Eye of Those Who Hate Their Very Existence? rips squishes and  Jonah Goldberg in particular, a new one. Politico reports (sometimes they do that), Graham to meet with Trump to talk future of GOP, From Hot Air, NYT laments GOP Acquittal Vote Is Defining Moment For The Party 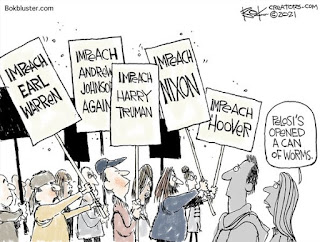 Jeff Dunetz at Da Lid ask another good question, If The GOP Wins The House Should They Try For Impeachment Revenge? "Lindsey Graham Thinks They May Try To Impeach Harris. Hell yes. Sauce for the goose and all. 'Fuzzy Slippers' at LI (I'm pretty sure that's a pseudonym) Lindsey Graham: “I don’t know how Kamala Harris doesn’t get impeached” If Republicans Retake House in 2022. John Hinderacker at Power Line, Should Republicans Impeach Biden and Harris? and throws Obama in for good measure. Heck, as long as we're impeaching people who are out of office Marco Rubio questions whether Trump impeachment sets 'new precedent' that could target Hillary Clinton, at Da Blaze.

We've been seeing this coming for a while, but Julie Kelly at Am Great reports The New York Times Retracts the Sicknick Story . The fire extinguisher story, that House Managers told the Senate, just doesn't appear to have any facts behind it, and, in fact, can be traced to House sources. Now media is working on the "bear spray" hypothesis.

Not only was the Times’ untrue story about Sicknick’s death accepted as fact by every news media organization from the Wall Street Journal to the Washington Post, political pundits on the NeverTrump Right also regurgitated the narrative that Sicknick was “murdered” as did lawmakers on both sides of the aisle.

In an outrageous effort to create more favorable optics before the impeachment trial, House Democrats honored Sicknick in a rare memorial at the Capitol Rotunda on February 3. Joe Biden, in a statement issued after Donald Trump was acquitted Saturday afternoon, repeated the lie about Sicknick. “It was nearly two weeks ago that Jill and I paid our respects to Capitol Police officer Brian Sicknick, who laid in honor in the Rotunda after losing his life protecting the Capitol from a riotous, violent mob on January 6, 2021.”

The Times’ correction might be one reason why Democrats on Saturday reversed their demand to subpoena witnesses. House impeachment managers cited the original January 8 Times’ article as evidence in their impeachment memo: “The insurrectionists killed a Capitol Police officer by striking him in the head with a fire extinguisher.”

Any arrangement to compel testimony would have provided Trump’s legal team with an opportunity to expose yet another myth in the Democrats’ “incitement” case against the former president.

On the ongoing occupation of DC by troops, At Da Wire, National Guard Could Stay In D.C. ‘At Least Through Fall 2021’. At Sundance's Sunday Talks, Richard Grenell Discusses the New Police State in Washington DC

Trial first, investigation afterwards. Kind of risky, isn't it? Just to assert that now what we need is an investigation is to make the fanfare of the last week seem, retrospectively, sketchy. We were urged to believe that we saw everything, and we know what we saw and what it all might. Are we just supposed to forget all that and imagine we're back at square one? How can this commission dare to find things that don't synch with the prosecution's case? Was Brian Sicknick beaten to death with a fire extinguisher?

Well, the Warren commission and the 9/11 Commission did so well at dispensing the conspiracy theories around the Kennedy assassination, and 9/11, didn't they? /sarc.