Yesterday, Mitch McConnell and Chuck Schumer apparently argued over the size and shape of tables... Sundance at CTH, Schumer and McConnell Agree to Senate Impeachment Trial Rules. Rules, they need rules for this absolutely Kafkaesque affair? WaPoo, Trump’s trial promises historic firsts, For both sides, constitutional issues at heart of atypical case. Bullshit; there are no constitutional issues at the heart of the Democrat case, it's "Orangeman bad" all the way down. And, to emulate the Red Queen, of course, they're already counting votes despite having presented no evidence. Whip count: Where Democratic and Republican senators stand on convicting Trump

At AmThink, Jonathon Mosely tells us What to Expect from Trump's Upcoming Impeachment Trial while William Levin explains: Why Chief Justice Roberts is Not Presiding over Trump’s Impeachment Trial,because it's debasing the Constitution

At Fox, Sen. Tim Scott: Trump is 'simply not guilty' on impeachment and at Newsweek, Congressmam Chip Roy opines that Trump Should Not Be Convicted. And Cruz and Hawley Are Not Seditionists. Sundance features Ric Grenell, who says “They Want to Cancel Trump” Atop da Hill Doug Kmiec claims Donald Trump should be convicted unanimously by secret ballot, because nothing say Republican style of  government like representatives voting by in secret. Of course, the idea is that half the Republican Senators hate Trump and would vote to convict if they weren't being held accountable by their voters. According to 538 (if you believe them) Barring Trump From Office Is More Popular Than Convicting Him.  From PM, Sen. Rand Paul calls for the impeachment of Sen. Chuck Schumer ""I think if we're going to criminalize speech, and somehow impeach everybody who says 'oh go fight to get your voices heard,' I mean really we ought to impeach Chuck Schumer then." And at Breitbart, Paul: If We Are Going to Criminalize Speech — Schumer, Maxine Waters, Ilhan Omar Should Be Held Accountable and Maxine Waters: I Have Never Glorified or Encouraged Violence Against Republicans  (yep, you did) and a Flashback from Matt Margolis at PJ Media, Kamala Harris Joked About Killing Trump, Pence, and Jeff Sessions. Fox, AOC won't apologize for tweet accusing Ted Cruz of nearly having her killed. Stupid bint. 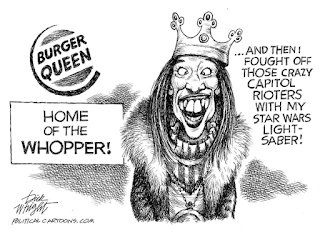 Which brings us to the Capitol Incursion. Althouse, Page 7 of Trump's Trial Memorandum concedes the very fact upon which I've said his guilt hinges.

Here's a PDF of the document. From page 7:


Law Enforcement Had Reports Of A Potential Attack On The Capitol Several Days Before President Trump's Speech.

Despite going to great lengths to include information regarding Mr. Trump's comments dating back to August 2020 and various postings on social media, the House Managers are silent on one very chilling fact. The Federal Bureau of Investigation has confirmed that the breach at the Capitol was planned several days in advance of the rally, and therefore had nothing to do with the President's speech on January 6th at the Ellipse. According to investigative reports all released after January 6, 2021, "The Capitol Police, the NYPD and the FBI all had prior warning that there was going to be an attack on the Capitol."

Obviously, Trump's lawyers think it's exculpatory that there was an advance plan. But I have been saying the opposite. Here's my January 10th post:

At TNP, ‘Inconsistent, Conflicting’ And Ignored Threat Assessments Ahead Of Jan 6 Capitol Attack. and from across the Pond at the Independent, Man charged in US Capitol riot worked for FBI and held top-secret security clearance, lawyer says "'He has been vetted and found numerous times as a person worthy of the trust,' attorney says" How many FBI agent provocateurs participated, I wonder. And an amusing finding at AmThink by Thomas Lifson, FBI criminal complaint on Capitol incursion used Photoshopped 4chan hoax picture as evidence Clearly using doctored evidence, albeit unwittingly.
At Ace's Morning Rant, Oregon Muse reminds us

Hey, remember the riots that erupted in Washington DC back in January 2017 when Trump was first inaugurated? When the rioters marched, threw stuff at cops, vandalized buildings, set cars on fire, that sort of thing? Remember that?

Then they arrested what, 100, 200 violent protesters. And you remember what happened next, don't you? Sure you do.

All of the charges against everyone who was arrested were dropped.

Dan Greeenfield at Front Page calls it The Reichstag Fire of the Democrats "A pretext for political terror." CNS News, Rep. Jackie Speier: 'Time to Call Republicans the Terrorist Right?’ Fox, Price tag surges to keep National Guard in DC, now estimated at $483 million. Because nothing says a free and fair election like needing to close down the Capital to protect the "winner." Insty, WHAT ARE THE DEMOCRATS SO AFRAID OF? GOP congressman: ‘We still don’t have answers’ to why National Guard remaining around Capitol.

How can the impeachment trial be fair if the Capitol is ringed with troops controlled by the man who beat Trump in the disputed election? That’s the sort of question we’d be hearing everywhere if the parties were reversed. Intimidation!

A fair trial? What a quaint idea! CNN proudly informs us, Less than 10% of Americans like QAnon, but then, almost nobody knows what QAnon is, except from CNN et al, who hate it. QAnon = Immanuel Goldstein.

John Solomon at JTN,  Momentum building in Nebraska to censure anti-Trump U.S. Sen. Ben Sasse. From Da Wire, Cheney Says She Won’t Step Down After State Party Censures Her, Calls For Resignation and at PJ Media, Stephen Kruiser says Liz Cheney Is a Cancer That Could Kill GOP's 2022 Hopes, but regarding Liz Sundance warns PAY ATTENTION – Those Still Advocating Against a Third Party Need to Move to Acceptance Phase, GOP is NOT Recoverable. Never-Trumper Charley Sykes, The Prodigal Republicans. Politico thinks they know Where Democrats and Republicans agree on Trump "Both parties want to be rid of him. They just differ on the means."

NYPo, Trump ‘happier’ now that he’s off social media: former aide. Wouldn't we all? and White House says Biden doesn’t have final word on refusing Trump intelligence briefings. Does he have to get Kamala's permission?

In spite of what you hear bandied about on the MSM news, In Two-Thirds of Election Lawsuits Where Merits Considered Decisions Are Favorable to Trump (ET)

Of the 22 cases that have been heard by the courts and decided on their merits, Trump and Republicans have prevailed in 15, according to citizen journalist John Droz Jr., a physicist and environmental advocate in Morehead City, N.C.

This means Trump has won two-thirds of the cases fully adjudicated by the courts.

Three of the 15 cases whose rulings were favorable to Trump were filed on or after election day, Nov. 3.

Aww, Brindisi Concedes! The NY-22 Race Is Really Over Insurrectionist:

It has been the honor of a lifetime serving my hometown, the place I grew up and am raising my family. Unfortunately, this election and counting process was riddled with errors, inconsistencies and systematic violations of state and federal election laws. My one disappointment is that the court did not see fit to grant us a recount. Sadly, we may never know how many legal voters were turned away at the polls or ballots not counted due to the ineptitude of the boards of election, especially in Oneida County. My hope is some authority steps in and investigates the massive disenfranchisement of voters that took place during this election…

And find plenty more at the Wombat's In The Mailbox: 02.08.21, JJ Sefton's The Morning Report - 2/9/21 at Ace's and Larwyn’s Linx: Six attorneys general send a stern warning to Biden over his radical policies