The issue of the day is two Republicans going after each other. McConnell: “Georgia Was A Fiasco. We All Know Why That Occurred”, meaning Trump, according to the WSJ cited at Hot Air. Possibly, but not certainly true. If there's one way to hurt Mitch, it's to take away his Majority Leader status. Chris Bedford at Da Fed McConnell’s Impeachment Ploy Was Not Statesmanship, But An Attack On The Base — And Republicans Must Remember It Well, "Friday's floor speech was no quick tantrum: It was the last stupid moments of the minority leader's plan to purge the GOP of Donald Trump." It's not going to work, because Trump actually gave Republicans a voice on matters that the old GOP shied away from, largely illegal immigration and trade, and they won't forget. 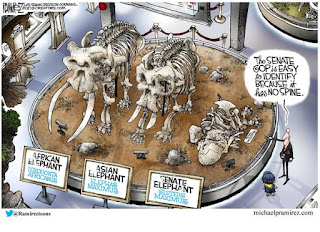 All too true, but in defense of dour, sullen and unsmiling political hacks everywhere, someone has to do the dirty work of keeping a legislative coalition together. As much as I like Rand Paul, a congress of Rands, each with their own special nits to pick, and no cat herder to keep them in line, would accomplish nothing good. Why, it's enough to make a political hack dour, sullen and unsmiling. I don't think any one expects McConnell to run for the presidency.

Natalie Winters at TNP, WINNING: Trump Approval RISES Amongst Republicans Following Partisan Impeachment. But, from Stacy Lennox at  PJ Media, Support for a Third Party Reaches All-Time High, Making It Likely There Is a New Coalition Forming, Sundance at CTH, Support For Third U.S. Political Party Reaches Highest Point in Twenty Years, 63 Percent of Republicans and 70 Percent of Independents Want Third Party Option. It could be the Republicans if they would listen to their base.

NYT (cited by Hot Air) is worried, Don’t Care For This Impeachment? Wait ’Til Next Year. Chris Deaton at USA Today wants to Block Trump from office with the 14th Amendment's aiding an insurrection exclusion, a clear Bill of Attainder. AllahPundit, Bannon: What If We Make Trump Speaker Of The House In 2023 And Let Him Impeach Biden For Stealing The Election?. Sure, why not? After 2020 (and 2021 so far), anything seems possible. WaPoo whines Lack of witnesses at Trump’s trial is not the problem. Witness intimidation is regarding Rep. Jaime Herrera Beutler (R-Wash.). Can't say bad things about a girl, now can we? That's intimidation!

Gleen Grenwalt on The False and Exaggerated Claims Still Being Spread About the Capitol Riot. "Insisting on factual accuracy does not make one an apologist for the protesters. False reporting is never justified, especially to inflate threat and fear levels." But isn't that the job of the press? False and exaggerated claims don't just spread themselves! Insider, The Capitol riot's 'zip-tie guy' appeared to take the plastic handcuffs from Capitol police, prosecutors say.  So, despite the tactical gear, he didn't come prepared to take prisoners. Chuck Ross at Da Daily Caller notes CNN And NBC Both Paid $35,000 To Left-Wing Activist For Footage Of Fatal Capitol Shooting. Agent provocateur. AllahPundit, Ron Johnson: Was The Capitol Riot Really An “Armed Insurrection”? No, not really, no shots were fired except by Capitol Police. Insty, WELL, THAT WAS BEFORE THE DEMOCRATS AND THE PRESS — BUT I REPEAT MYSELF — GOT HOLD OF IT: Sen. Ron Johnson: Capitol Breach Didn’t Seem Like an ‘Armed Insurrection’ to Me. "As far as I could tell, it was mostly peaceful."

Fox, 8, Democratic congressman sues Trump, Giuliani and groups like Proud Boys under KKK Act for roles in Capitol riots,  Althouse, "Underlying this insurrection were the actions of folks who were challenging the voices of people of color." "If you look at whose votes were being challenged, these came from largely urban areas. The votes of people of color were being challenged." They also just happen to live in all the urban centers were fraud is common in elections.

Fox, Pelosi's office pushes back on House GOP questions about Capitol security ahead of riot. What did Nancy know and when did she know it. One thing for sure, a "truth" Commission commissioned by Nancy and her Democrats will never explore that question. Tyler O'Neil, Pelosi Pushes Ahead With '9/11-Type Commission' to Fight Domestic 'War on Terror'. You mean the war on Domestic Right-Wing opposition, don't you? Insty has an AN OBSERVATION FROM A READER:

“The current US Government leadership feels the same way about January 6th as the CCP leadership felt about Tiananmen Square. They are taking lessons from how the CCP reacted to make sure it would never happen again in China, and using that as a model for how to have the same long-term effect in the US.”

Breitbart, CNN’s Lemon: Harris Didn’t Bail People in Minneapolis Out, She Just Tweeted about a Fund to Help Post Bail, ‘Which Is Entirely Legal’ Oh, so now you think someone needs to do something illegal to be impeached? I think Lindsey 2.0 was just using her as an example. But there are other examples of her inciting insurrection at the BLM riots.

Mediaite unhappy that PA County GOP Official Lashes Out at Pat Toomey for Voting to Convict Trump: We Did Not Send Him to DC to ‘Do the Right Thing or Whatever’ NYT whines that North Carolina Republicans Censure Richard Burr Over Impeachment Vote. Too late, he's taking his money and retiring. John McCormack at NR on Why Murkowski will likely win reelection despite impeachment.

Two changes to Alaska election law enacted via referendum in November 2020 will make it easier for Murkowski to keep her seat in 2022. First, Alaska got rid of partisan primaries and established an open primary in which the top four primary candidates will compete in the general election. Second, in the general election, there will be ranked-choice voting. Ballotpedia has the details:

Add it all up, and at the moment it’s hard to see Murkowski losing in 2022.

Ace, Grandstanding Sanctimonious Slapdick Adam Kinzinger Whines That His Family Is Shunning Him Over His Impeachment Vote Now wait for WaPoo to start calling it intimidation.

I don't think I believe him. Everything with these attention-whores of the Pseudoright is SJW-style Storytime Hour about their personal martyrdom in the cause of Pure Virtue.

But it would be funny if it were true. Maybe they're just using the impeachment vote as an excuse to get away from this preening jag.

Things that make you go hmmm, from Wa Ex, Fulton County board votes to fire elections director in Georgia

Kathleen Ruth, a Republican, supported the move to fire Barron, citing the need for new leadership after last year's contentious presidential election. “This is not political. This is a bipartisan vote,” Ruth said. “The department needs new leadership that can take Fulton to the next level, modernizing the elections process, making the county’s elections system more accurate and cost-effective and efficient."

Vernetta Keith Nuriddin, the other Democrat on the board, sided with her GOP colleagues in voting to fire Barron. Nuriddin said she was happy with Barron's decision to expand mail-in voting but felt there were too many problems in elections in recent years that could not be overlooked.

“My decision was not based on 2020′s election, but 2017, 2018,” Nuriddin said. “We have just consistent, continual issues around the absentee ballot process.”