Election 2020: Time Admits the Election was Rigged, and It Was a Good Thing 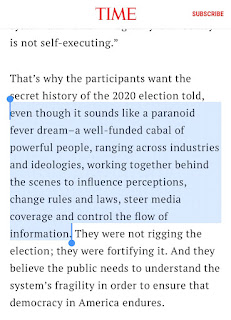 They don't mean to admit the law was broken, of course, just that the entire weight of the MSM, the social media giants, and all the bureaucracies of the government got together and rigged the game. The original article: The Secret History of the Shadow Campaign That Saved the 2020 Election

Bonchie at Red State, TIME Claims a Secret Cabal Manipulated the 2020 Election to Stop Trump, and People Have Questions

TIME wrote a very interesting piece making some very alarming claims. Namely, that a secret cabal banded together across the country to stop Donald Trump from winning re-election. This included everything from manipulating media coverage to getting election laws changed, at least according to TIME’s account.

Yeah, this seems like a pretty big deal to me, and nakedly undemocratic, at least if you care about that sort of thing. Politics is inherently manipulative on some level, I suppose, but working to change election laws and quenching the flow of information to affect an election is a bit past your typical bluster on the stump.

Stacy McCain, You Can’t Say ‘Rigged’. But I just did.

This story is nearly 7,000 words, which is a lot to chew on, but here’s one part that attracted my attention:


The racial-justice uprising sparked by George Floyd’s killing in May was not primarily a political movement. The organizers who helped lead it wanted to harness its momentum for the election without allowing it to be co-opted by politicians. Many of those organizers were part of Podhorzer’s network, from the activists in battleground states who partnered with the Democracy Defense Coalition to organizations with leading roles in the Movement for Black Lives.
The best way to ensure people’s voices were heard, they decided, was to protect their ability to vote. “We started thinking about a program that would complement the traditional election-protection area but also didn’t rely on calling the police,” says Nelini Stamp, the Working Families Party’s national organizing director. They created a force of “election defenders” who, unlike traditional poll watchers, were trained in de-escalation techniques. During early voting and on Election Day, they surrounded lines of voters in urban areas with a “joy to the polls” effort that turned the act of casting a ballot into a street party. Black organizers also recruited thousands of poll workers to ensure polling places would stay open in their communities.
The summer uprising had shown that people power could have a massive impact. Activists began preparing to reprise the demonstrations if Trump tried to steal the election. “Americans plan widespread protests if Trump interferes with election,” Reuters reported in October, one of many such stories. More than 150 liberal groups, from the Women’s March to the Sierra Club to Color of Change, from Democrats.com to the Democratic Socialists of America, joined the “Protect the Results” coalition. The group’s now defunct website had a map listing 400 planned postelection demonstrations, to be activated via text message as soon as Nov. 4. To stop the coup they feared, the left was ready to flood the streets.

Do you see that these dots connect in a non-random way? And do you understand how the news media was part of this coordinated operation?

Via the Wombat's In The Mailbox: 02.05.21, Hogewash: Spinning The First Draft Of History To Fit The Narrative, the Victory Girls,  Left Admits 2020 Election Was “Fortified” The Democrat Way  and Vox Popoli:  They “Saved” The Election. Sundance at CTH, Interesting Admissions – Lawfare Outlined as Part of ‘Secret Campaign Group’ Coordinating to Influence 2020 Election. Spinning Strangeness, Out: claims the elections are rigged are conspiracy theories. In: TIME magazine article about why rigging the election was a good thing. Ace, Time Magazine: You're G**damn Right We Ordered the Code Red on Rigging the Election. And We Should Get Medals for It. "Will Time be deplatformed for admitting this? Nah." But would people who feel that strongly about an election cheat, or condone those that did? You betcha.

I woke up early this morning literally laughing thinking about what a bunch of morons the Democrats (+11) are for giving some one like me free time. In this Democrat tyrannical government, Conservative Republicans have no say on committees anyway. Oh this is going to be fun!

Pretty much what I said yesterday. Matt Vespa at Town Hall, Did a CNN Reporter Really Just Say That About Marjorie Taylor Greene?

Matt Margolis at PJ Media has a list of 9+ Democrats Who Should Be Ousted From Their Committees by the Marjorie Taylor Greene Standard. Why stop there? If Republicans get the House back in 2022, take out every Democrat, just to make the point.

The Bulwark Boyz want you the have their Understanding of the House Republican ClusterFrick. No thanks. And at the WSJ Peggy Noonan opines Liz Cheney Wins One for Sanity But Liz Cheney doesn't care about the the Constitution. Natalia Mittelstadt at JTN. Ken Starr: Impeaching Trump post-presidency 'is a flagrant violation' of the Constitution "Starr says it is a constitutional violation for the Senate to hold an impeachment trial without the chief justice." Ex-Republican Capt. Ed at Hot Air has the sads that  Fewer Than Half Think Senate Should Convict Trump In Next Week’s Trial.

Kurt Schlichter at Twon Hall, Trump Moves Out of the White House and into Their Heads while across the Pond, at Da Mail, they think Trump is planning a revenge tour: Ex-president is 'plotting to settle the score with disloyal Republicans who voted for his impeachment after his trial concludes'. Could be.

NYTimes. They Stormed the Capitol. Their Apps Tracked Them. "Times Opinion was able to identify individuals from a trove of leaked smartphone location data." I'll bet they didn't try in Portland or Seattle.
Ace, Marc Elias -- A Lawyer at the FusionGPS-Hiring Perkins Coie, and Hillary Clinton's Lawyer for the 2016 Election -- Files Lawsuit to Get Election Overturned, Claiming That Machines Undercounted "Hundreds if Not Thousands" of Votes, "This is in the race for New York's 22nd Congressional District -- a district in which the Republican is ahead by a crucial handful of votes." but I'm sure Smartmatic won't sue him. CNN, 'There is real teeth to this': Legal experts weigh in on Smartmatic's $2.7 billion lawsuit against Fox News, WaEx, Smartmatic files $2.7B lawsuit against Fox News, Giuliani, and Powell over election fraud claims. LAT cited at Hot Air, Breaking: Fox News Cancels Lou Dobbs’ Show

The cancellation comes a day after voting software company Smartmatic filed a $2.7 billion defamation suit against Fox News and three of its hosts — Dobbs, Maria Bartiromo and Jeanine Pirro. The company claims the hosts perpetuated lies and disinformation about Smartmatic’s role in the election, damaging its business and reputation.

Sundance, Fox News Cancels Lou Dobbs – Their Number One FBN Show "There is only one-way to look at this announcement…. corporate U.S. media is in the tank for the cancel-culture policy against all things President Trump related.  P.e.r.i.o.d."

And Speaking of NY 22nd, Republicans win the last disputed congressional race from November's election "The GOP pickup in the House shrinks the Democrats’ majority to 221-212" It's insurrection to dispute this now, right?

Nick Rowan at WaEx, Supreme Court to consider election lawsuits in February. A little later, AMI right? But I thought the courts had ruled!

The Supreme Court on Friday listed several high-profile election lawsuits for consideration at its mid-February conference.

The cases include challenges to the 2020 election from Trump-aligned lawyers Lin Wood and Sidney Powell, as well as Republican Rep. Mike Kelly's Pennsylvania lawsuit. Nearly every lawsuit takes issue with the expanded use of mail-in ballots by many states.

The decision came after the court declined to fast-track all election-related litigation in early January.

In nearly every plea for expedition, lawyers backing former President Donald Trump told the court that if the cases were not heard before President Biden's inauguration, their success would be unlikely.

But after the court pushed them off, many lawyers said that the challenges were still important and could have long-term implications for election fairness. Trump lawyer John Eastman told the Washington Examiner that even with Trump out of office, it was important to settle the issues raised by expanded mail-in voting.

"Our legal issue," he said, referring to the way in which Pennsylvania conducted the 2020 election, "remains important and in need of the court’s review."

Similarly, Kelly's lawyer Greg Teufel, told the Washington Examiner after the court refused to hear his case before the inauguration that the 10-year congressman and major Trump ally had no intention of dropping the suit.

As election litigation continues to play out in the courts, many Republican state legislators have begun introducing bills to curb mail-in voting through law.

It would be funny if the court ruled that Trump won the election fair and square and that Biden and crowd were out. Funny, but very unlikely.