They've been hyping it on TV for days now, Winter Storm Quade as the weather channel likes to call it. When I got up at 7 AM, it was raining, but a quick look at the radar revealed we were right on the rain/snow line. A few minutes later it started to snow, and well, here we are now: 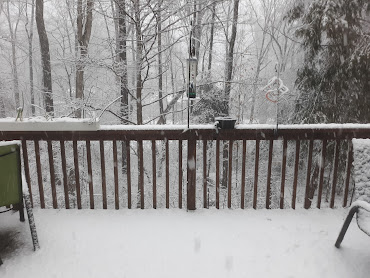 Points north are expecting considerably more, and it will be a good excuse for Washington D.C. to do more nothing, which is generally a good thing. Now back to our election coverage.

Althouse: I have been reading and trying to get around to blogging "The Secret History of the Shadow Campaign That Saved the 2020 Election" since 2:10 p.m. yesterday.

This is a long article, and understanding it, for me, involves figuring out why Time published it and understanding the possible bias of the author, Molly Ball. It's hard not to read "saved the... election" as rigged the election. Why is this coming out now, just before the weekend before the impeachment trial begins? Time is openly proclaiming that something "secret" happened in the "shadow"?

As is often true, much of the thought is in the comments, e.g Gahrie:

Why was it published? They really believe they did nothing wrong.

Oh they know they did something wrong. But half the fun is getting away with it, and the other half is taunting the Deplorables about it afterward.

What this all boils down to is the reality that the far-left has become too cocky for its own good. We have already seen their overconfidence manifest in their push for a second impeachment that is sure to end in utter failure. In their arrogance, they cannot see how trying – and failing – to remove a president who is already out of office is making them appear to a public that simply wants to move on from 2020.

1) The Establishment realizes that they have so far been unable to control the public perception that Election 2020 was a Big Steal. That remarkably wide perception--in the face of a relentless full court disinformation press--bodes ill for the 2022 elections

2) As a result they're putting out a counter narrative to the Big Steal, the purpose of which is to make it look legit. In other words, it's yet another attempted exercise in perception management--and that's what tells us that they know they're failing. They wouldn't bother, otherwise. The appearance of candor in the story is simply part of the technique and is another indicator of desperation.

Beckett Adams at WaEx thinks The Time magazine expose on the conspiracy to elect Biden is not what you think it is. What, she can read my mind?

Again, conservatives and Trump supporters have been told they are paranoid to believe in such things, the idea that an alliance of powerful elites could work together quietly to influence the outcome of a presidential election.

But that is apparently exactly what happened.

And onto the continuing saga of Marjorie Taylor Green. At Town Hall,  'Morons': Marjorie Taylor Greene Reacts After Getting Booted from Committees "I'm fine with being kicked off my committees, because it'd be a waste of my time," she argued, adding that this means she can now "talk to a whole lot more people, all over this country." At NR, "the editors" claim Democrats Will Regret Their Move against Marjorie Taylor Greene. They usually call it "unfair" when it's their turn in the barrel.

If the majority can keep members of the opposition party off of committees based on incendiary comments, it’s not clear why the GOP ever let, say, Maxine Waters serve on any committees when it had control of the chamber, or why it ever will again.

Kicking off Greene will come to be remembered as another inflection point in the steady unraveling of institutional norms on Capitol Hill.

Andy Fienberg at the Independent say  Kevin McCarthy got exactly what he wanted from the Marjorie Taylor Greene vote. A precedent to do unto others, and Andy's not happy about it.

Such a miscalculation has significantly raised the stakes of future elections because of the GOP’s propensity to abuse power, they said: “After this, we can never afford to lose the majority again.”

Robby Soave take to Da Beast to claim I’ve Documented Cancel Culture for Years. Marjorie Taylor Greene Is No Cancel Culture Victim. "If it’s wrong to punish her for the views she expressed on political topics, democracy itself is wrong: Picking and choosing leaders who have sound opinions is the whole point." Tom Maguire at JOM, I'm With Crazy. For Now.

Well. It what might be a Fifth-Dimensional Genius Chess Move, maybe Reps could re-brand as the Greene Party! Tell the Q-ers that they back Marjorie and tell the suburbanites they have become more eco-friendly. Might work!

At NR, Trump Impeachment Trial: Former President Should Receive a Fair Chance. "Should" being the operative word. He won't, but as Politico notes, Trump impeachment lawyer says he'll use video of Dems' own remarks at trial "If my eyes look a little red to the viewers, it's because I've been looking at a lot of video," I expect judge and juror Patrick Lahey will take a dim view of that. And WST whines that  Primary Challenges Proliferate Against Republicans Who Voted to Impeach "Republican lawmakers who supported President Donald Trump’s second impeachment are attracting potential primary challengers for 2022" If you're elected officials don't represent you, elect ones that do.

At Reason, JD Tuccille reasons Americans Shouldn't Be Treated Like ISIS Insurgents "Adopting "counterinsurgency" tactics for use against wide swaths of Americans can only make the situation worse." But  Robert Spencer at PJ Media says, Fight Trump Supporters Like We Fought Al-Qaeda? under Obama/Biden? Good Idea.

The UN and other organizations will take up the problem of Trumpophobia and call upon member states to establish legal safeguards to protect Trump supporters and to admit more to their countries, if they choose to leave the U.S. as refugees. The establishment media will regularly feature admiring pieces about moderate Trump supporters who are working hard to clear away “misconceptions” about what support for Trump really means. Those who ask these Trump supporters to state for the record that they oppose the storming of the Capitol and any attempt to overthrow the government will be drowned out by cascades of accusations that they are trafficking in “hate” and otherizing an entire community. The entertainment industry will go out of its way to feature wise, genial Trump supporters in movies, characters who are often unjustly suspected of terrorism but are ultimately found to have been fighting against terrorism all along.

Meanwhile, the U.S. government will implement programs of outreach to moderate pro-Trump organizations, who will enjoy virtually unfettered access into the three branches of government at all levels. Presidential candidates will angle for the votes of Trump supporters and their allies by promising to appoint more Trump supporters to his administration. The military will begin to arm and train moderate Trump supporters to fight against the militants, and if indications appear that any of the people they took to be moderates are actually aiding those militants, military brass will turn away and pretend they didn’t see a thing, for the sake of the greater good involved.

AllahPundit at Hot Air wonders No, Really, Why Did Fox Fire Lou Dobbs? It makes them look weak. Breitbart, Donald Trump Backs Lou Dobbs After Fox Ends Program: ‘Nobody Loves America More’, a martyr to the cause? Slate tried to make The Case for Trump’s Permanent Ban From Social Media. Liberals used to be for freedom of speech, when they were really liberals, and not fascists.

And Sundance passes along the Mike Lindell Documentary: “Absolute Truth”

Mike Lindell (the MyPillow guy) has produced a video documentary highlighting the 2020 election and some of the evidence he finds troubling. The first hour might be familiar to many, but the second hour contains details not presented before.