Not feeling it this morning, but let's dive in anyway. On shampeachment 2.0, Thomas Ascik at Da Fed goes into gory detail about  Why It’s Completely Unconstitutional To Impeach Someone After He Leaves Office. Yeah, but they're going to do it anyway (And they impeached him while in office, they will fail to convict when he's not in office, just to get that straight). The Senate will do what it wants, Constitution be damned. Althouse discusses Pro-se Trump?

I'm reading "Trump Names Two Members of Impeachment Defense Team/The announcement came a day after he parted ways with five lawyers, and with his trial looming next week" (NYT):

Mr. Trump has told advisers he wants the defense to focus on his baseless claims about election fraud, a person familiar with the discussions said. A person close to the former president disputed that that was the case, but conceded that Mr. Trump had dismissively said the case was so simple that he could try it himself and save money.

Just to save money? Or does he think he's the one best able to put the case in the form that seems right to him: simple!

I wouldn't put it past him. After all, he decided that he could do the whole President-of-the-United-States job. The weirdest thing that's happened in my lifetime is Trump becoming President. I can totally see the Senate doors opening and Trump strutting in, with just a page of notes tucked into his jacket pocket.

The whole reason I was excited about Trump bringing in new attorneys to argue election fraud was that it would amount to him grabbing wimps like John Cornyn by the back of the head and rubbing their faces in conspiracy theory dog sh*t, daring them to convict as they grew more embarrassed by the spectacle. They deserve that humiliation. And Trump loves humiliating people. It would have been magical.

As I said, I don't think it matters what the defense says; Trump might as well get his talking points out too. From Sundance at CTH, Jason Miller Discusses Next Week Impeachment Trial with David Asman

John Solomon at JTN, Payback: Republicans who backed Trump impeachment face rising rebuke, including censure, Jordan Davidson at Da Fed, South Carolina GOP Unanimously Censures Rep. Tom Rice For Trump Impeachment Vote. Votes have consequences. Via the Wombat's In The Mailbox: 02.01.21 from Am Think, Liz Cheney’s Predestined Future. And from Sundance, Unsurprisingly, Mitch McConnell Backs Liz Cheney. Birds of a feather.  Also, Ted Cruz Accuses President Trump of Being Reckless and Irresponsible. I think that's fair, it was lousy time and place for the rally. But not illegal or impeachable.

CNN is reporting that the Biden administration can't decide whether the armed, military takeover of the civilian government in Myanmar is a "coup" or not. Meanwhile, they are certain the Viking Hat guy and his selfie army were a coup.

NYT whines (via Hot Air) about 77 Days: Trump’s Campaign To Subvert The Election. To oppose a Democrat is by definition to "subvert the election".

Jerry Dunleavy, WaEx, Leftist activist who egged on rioters inside Capitol accused of violating terms of release (John Sullivan, CNN spox). Breitberg checked and found Nonvoters, Registered Democrats Among Those Arrested at Capitol Protest. Agent provocateurs. From Politico, AOC burbles   ‘I thought I was going to die’: AOC personalizes insurrection, bringing up past sexual assault "“These folks that tell us to move on … these are the same tactics as abusers,” the New York Democrat said on Instagram Live."

At one point, she described a man in a black beanie banging on her office doors and screaming, “Where is she?” As she hid in her office bathroom, she said, the man entered her personal office.

“I just thought to myself that they got inside,” she said. “I really just felt like, if this is the plan for me, then people will be able to take it from here.”

“I thought I was going to die,” she continued.

The man turned out to be a Capitol Police officer, but she said that the experience left her shaken and that the officer engaged in a “hostile” manner with her. She also said he gave her vague instructions on where to seek shelter, resulting in her and her staff wondering where to go. 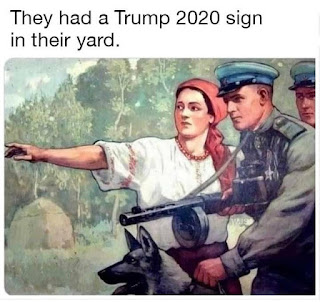 A perfect representative. Too stupid to govern. Stacy McCain asks Who Is an ‘Extremist’?

The difference between my friends and the people arrested in the Capitol riot is not whether we believe Joe Biden was legitimately elected. Like approximately 50 million Americans, we suspect the Democrats engaged in widespread election fraud. The question is whether we think resorting to lawless violence is the proper response. While the guys who planned the “storming” of the Capitol apparently believed only violence could solve this problem, the rest of us — i.e., those who aren’t facing federal charges — are generally of the opinion that what we need to do is be patient, get organized and try to win future elections by margins so large that Democrats can’t steal it. An “extremist” is violent; the rest of us are just engaged in ordinary political activity.

What is happening in the media is that they are using the Jan. 6 Capitol riot as an excuse to smear all Republicans as “extremists,” and thus to enable the suppression of dissent in the Biden era.

You see, however, the circular logic — the Kafkatrap — of the “extremist” accusation: If you believe that this alleged menace is being exaggerated as a pretext to suppress dissent, you’re an “extremist”!

Also from Stacy, The ‘Nationalist’ Kafkatrap

Liberals argue this way habitually, and never get called out for it. They will claim that a certain policy proposal is intended to help a certain category of (allegedly) oppressed people and, if you dare criticize or oppose their policy for any reason, you will be accused of Thoughtcrime, i.e., some sort of hate toward the oppressed victim group. Anyone who objects that such accusations are unfair — “I’ve known Tom for years, there’s not a prejudiced bone in his body” — will be accused of sympathizing with the haters. You are just like a “good German,” complicit in the Nazi murder six million Jews. No protest of innocence can save you, once you are so accused. If, for example, you think it’s a bad idea for the federal government to mandate that “transwomen” compete in women’s athletics, you will be accused of murderous hatred toward transgendered people. The next time a “transwoman of color” is murdered in Chicago, the blood is on your hands! Never mind the fact that you’ve never been to Chicago, a place where becoming a murder victim is notoriously easy. Because of (a) your policy disagreement with liberals, (b) you are a “hater,” and therefore (c) your opinion is invalid, and (d) you deserve to be “doxxed” and fired from your job.

Robert Spencer at Front Page, The Show Trials and Purges Are Just Getting Started "The new age of masterful constitutional scholars such as Nancy Pelosi and Chuck Schumer."

As fifty-five senators are now on record saying that the impeachment of a former president is perfectly constitutional, there is no reason not to extend wokeness back to 1789 and cleanse the ugly blot Leftists think of as our history. Washington? Jefferson? Slaveowners! Impeach them! Andrew Jackson? Trail of Tears. He clearly has to go, too. James K. Polk? Started a war with Mexico when he should have just opened our borders and given all non-citizens the right to vote, free housing, and a COVID-19 vaccine. As Rashida Tlaib would say, Impeach the motherf***er! Theodore Roosevelt? Imperialist! Woodrow Wilson! Racist! Impeach them all! In fact, we must impeach all previous presidents, even Saint Barack the Hussein, for none of them, none at all, were woke enough. Remember Obama’s opposition to gay marriage? They all must go, every one, or Ilhan Omar’s moral superiority will be affronted. That must not be. 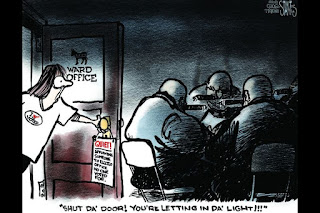 Chris Vance, Seattle Times Principle over power: Let’s form a new Republican party and Sundance is content that Bush Era Republicans Vow to Leave the Party While Electorate Support President Trump. And speaking of those Bush Era Republicans, from the Weasel Zipper (via the Wombat's In The Mailbox: 02.01.21), Lincoln Project Founders All Have Ties To Russia, Tax Trouble… also, tolerance for pedophiles.

And also from the Wombat's In The Mailbox: 02.01.21, Da Tech Guy explains why, in the future, Republicans Might Need 53% Of The Vote To Win Elections, to exceed the margin of cheat.