Did Biden Let Texas Freeze in the Dark over Global Warming?

If you believe this article at Your News: Joe Biden’s Dept. of Energy Blocked Texas from Increasing Power Ahead of Enduring Storm, and they seem to have the goods in the form of documents from Biden's DOE refusing to allow Texas utilities to increase coal and gas fired power generation in the face of the oncoming storm:

The order shows Acting Energy Secretary David Huizenga did not waive environmental restrictions to allow for maximum energy output, instead ordering ERCOT to utilize all resources in order to stay within acceptable emissions standards – including purchasing energy from outside the state.

“ERCOT anticipates that this Order may result in exceedance of emissions of sulfur dioxide, nitrogen oxide, mercury, and carbon monoxide emissions, as well as wastewater release limits,” the order states. “To minimize adverse environmental impacts, this Order limits operation of dispatched units to the times and within the parameters determined by ERCOT for reliability purposes.”

Moreover, the order instructed an “incremental amount of restricted capacity” to be sold to ERCOT at “a price no lower than $1,500/MWh,” an increase of over 6,000 percent over February 2020 prices of $18.20.

The EO shows the Biden administration basically ordered ERCOT to throttle its energy output by forcing it to comply with environmental green energy standards, while knowing full well Texans could freeze to death in their homes with zero electricity as temperatures plunged into the single digits.  Read the order:

So here's what occurred: 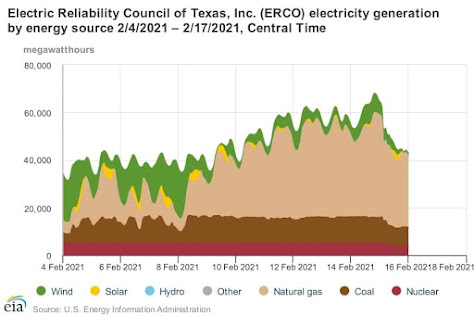 You can see that wind power generation basically dropped to near zero in the face of the storm, and natural gas, previously used to make up the gap between relatively steady coal and nuclear power, and the much more variable wind power, was forced to provide the bulk of the power. Due to DOE orders, much of that power had to be purchased from out of state, at ridiculously high prices. As you can see, solar power contributes very little over all, and even less once the storm hit.

On top of increasing demand due to low temperatures, there were multiple system failures, down power lines and power plants that went off line due to lack of fuel delivery, in addition to the problems with wind power, caused by blade icing (preventable with heating element not present because they were thought to be not needed) and by high winds, during which wind turbines must be stopped to prevent catastrophic damage.