Because we know it doesn't end here. But first a round up of reactions to the acquittal of President Donald Trump on the charge of inciting insurrection at the Jan. 6th riot and incursion of the Capitol. Stacy McCain, Impeachment 2.0 Farce Is Over "If it’s “inciting insurrection” to say Democrats stole the election for Biden, then they’re going to have to put a lot of us in prison. And they might as well start with me." Ace, Trump Acquitted in Impeachment Farce; Seven (Soon to be Ex-) Republicans Vote to Convict; Establishment Shill and Chinese Agent Mitch McConnell Votes to Acquit, But Then Openly Calls for Trump to be Prosecuted/Persecuted with Further Criminal Show-Trials I think he put it all in the title. Wretchard, Acquitted "Up next: the battle to define conservative politics as Biden faces a new world." Jazz Shaw at Hot Air, It’s Over. Trump Acquitted Yet Again, "In the end, Trump’s lawyers made the case that has been stated all along. The President was being charged (in a political process, not a legal one) with thought crimes. Or, if you prefer, “speech crimes.”" Sundance at CTH, Senate Votes to Acquit President Trump – Seven DeceptiCons Showcase The UniParty: Burr, Collins, Cassidy, Murkowski, Romney, Sasse and Toomey "It was really a no-brainer going into the entire fiasco of a ridiculously political impeachment effort.  For all their scheming, machinations and insufferable disconnect from a moral nation, these DC officials know they do not represent America. " 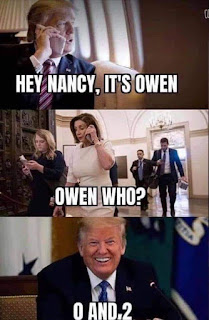 Giving the other team a shot, NYT via Hot Air, Trump Is Guilty, He stole our precious! WaPoo whines Trump acquitted on impeachment charge of inciting deadly attack on the Capitol "Former president Donald Trump was acquitted Saturday of inciting the Jan. 6 attack on the Capitol, becoming the first president in U.S. history to face a second impeachment trial — and surviving it in part because of his continuing hold on the Republican Party despite his electoral defeat in November."  Fox, Pelosi blasts McConnell and 'cowardly group of Republicans' in Senate after Trump impeachment acquittal "Pelosi says 'justice wasn't done' on Saturday" Twitchy, Nancy Pelosi crashed impeachment managers’ presser and came unglued after the Senate acquitted Trump

More from Sundance, A Message From President Trump After Senate Impeachment Acquittal – “Our Movement Has Only Just Begun”… and Tonight We Dance…

Spectator US, Schumer blindsided by Democrat impeachment managers demanding witness. Beth Bauman at Town Hall, Herrera Beutler's Alleged Conversation with Leader McCarthy Becomes the Focal Point of the Impeachment Trial. Hearsay. Althouse cites Turley, Yet, there was a glaring omission in the substance of the House arguments. The managers... only briefly touched on proving any 'state of mind' needed for such a conviction." and "A perpetual stew, also known as hunter's pot or hunter's stew, is a pot into which whatever one can find is placed and cooked. The pot is never or rarely emptied all the way..."

From the Wikipedia article "Perpetual stew," which I'm thinking about this morning... after the Senate voted to allow witnesses at the Trump trial and I think I overheard from the TV that I am not watching that the trial could go on for months. Months? Why not years? Why should it ever end? Keep it seething and quietly simmering forever! Why end it and only create the need to start anew with a third impeachment, a fourth impeachment, a fifth impeachment? Just keep this impeachment going, now and forever, one and inseparable...


and "Senators, America we need to exercise our common sense about what happened.... Let's not get caught up in a lot of outlandish lawyers theories here. Exercise your common sense about what just took place in our country." When do we get to bypass studying the factual details and legal standards and all the links in a chain of reasoning? When is it okay to just look at the whole thing and rely on instinct and just know that something is right or wrong? . . . The answer can't be: When it helps my side win.

The Democrats have converted impeachment from a measure of “high crimes and misdemeanors” to simply an indicator that the House of Representatives is controlled by the opposition party. Once again, people claiming to stand up in favor of institutions and traditions against Donald Trump have actually wrecked those institutions and traditions out of pique. This has done lasting damage to the Republic, and they don’t care. They never care.

and  WELL, YES. THE DEMOCRATS’ AND MEDIA’S — BUT I REPEAT MYSELF — EFFORT TO MAKE ELECTION FRAUD CLAIMS SUDDENLY OUT OF BOUNDS IS RISIBLE: Majority agrees: Don’t punish Trump for election theft claims. Flashback, November 2, 2020: Will your ballot be safe? Computer experts sound warnings on America’s voting machines.

A moment of levity as Sen. Ted Cruz shares actual impeachment trial questions that didn’t make the cut in a thread Eric Swalwell & others will NOT like

4/x Q2: “Can we build the Keystone Pipeline if we add Hunter Biden to the board?”

6/x Q4: “(generic) Have any of the House Managers had sexual relations with a Chinese communist spy? Please explain.”

From NTY via Hot Air MoDo projects Trump’s Taste For Blood. Lauren Witzke on Twitter SHOCKING: Senate Majority Leader, Mike Shirkey caught on camera telling the truth about Jan 6th. . . . It was ALL staged, Mitch McConnell wanted it to be “a mess” so he could secure a Trump impeachment conviction for Pelosi and Schumer. Shirkey apologizes for statements made in video. But note carefully he regrets saying it, but doesn't deny it. The unsinkable Mollie Hemingway on Twitter, I'm just sitting here watching the video montage of the Summer of Rage that destroyed *so many* Americans' lives with prominent Democrats' open support of those riots and shaking my head in anger. Insty, THAT’S DIFFERENT BECAUSE SHUT UP: BEFORE INCITING RIOTS, KAMALA HARRIS JOKED ABOUT KILLING TRUMP, PENCE. Julie Kelly at AmGreat asks the great question What Happened to Officer Brian Sicknick? No answer yet. ProPublica, “I Don’t Trust the People Above Me”: Riot Squad Cops Open Up About Disastrous Response to Capitol Insurrection. It'a generally good practice not to trust the people above you. Tiana Lowe opines at WaEx, What if they had executed Mike Pence? Boy, would that put liberals in a pickle; having to make a martyr out of Pence; I can see the heads exploding. Gateway Pundit, IGNORED BY THE MEDIA ELITES AND FBI: List of 20 Individuals at the Capitol on January 6th – All Appear to be Connected to Antifa or Far Left Groups. To be fair, most are just photos of Anitfa looking dudes and dudettes; we already know about John Sullivan and girlfriend Jade Stacker.

Insty, I GUESS INCITEMENT IS GOING OUT OF STYLE and CHARGE THE DEMOCRATS AND MEDIA — BUT I REPEAT MYSELF — WITH INCITEMENT: Lawyer says his home, family ‘under siege’ as retaliation for representing Trump in trial.

When prominent “White Shoe” law firms represented accused Al Qaeda members, for free, we were told that everyone deserves a defense. But lawyers representing Trump have been repeatedly mobbed.

Remember, though, it’s all about protecting “decency” and “our democracy” and our institutions from that bully Trump.

Matt Vespa at Town Hall on Nikki Haley's comment that the Republicans are done with Trump, With That Declaration, Here's Why Nikki Haley's Presidential Hopes Just Went Up in Flames and Don Surber, Nikki, they still hate you and want you to die, meaning the liberals she hope to assuage.

Old, but worthy, Check Out What Qualifies as a “Signature Match” in Georgia

Paul Bedard at WaEx, Democrats fear getting 'caught with our pants down' in 2022. More like their skirts. Roger L. Simon at ET, Opinion: The Democrats’ CCP Envy Life is so much easier when you tell the peasants what to do, rather than vice versa.
Posted by Fritz at 10:24 AM