Althouse reminds us "President Trump was not the first Presidential candidate who declared himself cheated out of victory." citing House impeachment managers. Why yes, I can recall John Effing Kerry and Hillary Clinton nursing similar grudges. In particular, Hillary and her crowd seem to have carried out a campaign to delegitimize Trump as a result. If they'd known she was beaten they'd have cheated harder.

From Henry Rodgers at Da Caller, Matt Gaetz Says He Would Resign From Congress In Order To Defend Trump In Impeachment Trial. A noble gesture, I suppose, but why bother? AllaPundit, not a Gaetz fan "Is there somewhere I can donate to this idea?"

From Da Beast, Trump Keeps Begging His Impeachment Lawyers to Push the Big Lie. Da Caller, CNN Legal Analyst: ‘You Don’t Have A First Amendment Right To Lie’. In mediaspeak, a lie is a truth that contradicts the desire narrative.

Schumer sees the light at the end of the tunnel, and doesn't like what he sees, Schumer Leaves The Door Open On Censuring Trump If He Is Acquitted In Senate. Something that doesn't take 2/3ds.

The unsinkable Mollie Hemingway reminds of the time Chucky sicced a mob on the Supreme Court, and the time the Women's March invaded the Capitol and shut it down. Chuck Schumer Used Violent Rhetoric To Sic A Mob On Two Supreme Court Justices. Spare me all the the high dudgeon now. Am Mil News, Report: DOJ may use mafia-inspired RICO charges against protesters who stormed US Capitol. Now do Schumer and the Women's March. 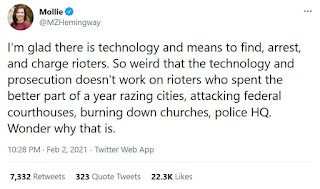 Dan Greenfield at Front Page, Dems Falsely Call Capitol Riot a "Coup", Won't Call Burma Coup a "Coup" Control of the language is one of the ways they control the narrative. Buzz Feel whines Trump Supporters’ Own Explanations For Assaulting The Capitol Are Undercutting His Impeachment Defense "“President Trump told Us to ‘fight like hell,’” one Trump supporter reportedly posted online after the assault on the Capitol."  Obama - ‘If they bring a knife to the fight, we bring a gun,’” he said at a Philadelphia fundraiser. Nick Arama at Red State reveals AOC Wasn't Even in the Capitol Building During Her 'Near Death' Experience. She is kind of a drama queen, isn't she.

In Sicknick's case, it's still not known publicly what caused him to collapse the night of the insurrection. Findings from a medical examiner's review have not yet been released and authorities have not made any announcements about that ongoing process.

According to one law enforcement official, medical examiners did not find signs that the officer sustained any blunt force trauma, so investigators believe that early reports that he was fatally struck by a fire extinguisher are not true.

One possibility being considered by investigators is that Sicknick became ill after interacting with a chemical irritant like pepper spray or bear spray that was deployed in the crowd. But investigators reviewing video of the officer's time around the Capitol haven't been able to confirm that in tape that has been recovered so far, the official said.

The case could also be complicated if Sicknick had a preexisting medical condition. It could not be learned if he did.

Congress is playing games as  Marjorie Taylor Greene's, Liz Cheney's futures in balance as House GOP gathers for crucial meeting Wednesday. So what happened? Sundance is not thrilled that the House Republicans Vote to Keep Liz Cheney in Leadership Position but AllahPundit was jazzed that Liz Cheney Tells House Republicans In Meeting: I Ain’t Sorry; Breaking: Cheney Wins Leadership Vote Easily. And WSJ reporters are thrilled that Democrats Move to Pull Marjorie Taylor Greene From Panels After GOP Declines Action. Sundance, Leftists Move to Alinsky Representative Marjorie Taylor Greene For Thought Crimes Against Totalitarian State Interests  and AllahPundit whines that McCarthy says I Condemn Greene’s Past Comments — And Also The Democrats’ Unwillingness To Punish Their Own Cranks. If saying something stupid were a bar to being in Congress, the halls would be much quieter. And just to be fair,  Republican lawmakers begin effort to remove Rep. Ilhan Omar from committee assignments for a long history of anti-Semitic and other ridiculous comments. It won't work, but at least it points out the asymmetry.

Newsmax host who stormed out of interview with Mike Lindell: “There is no question I could’ve handled the end of the interview differently,” adding “[Lindell] will continue to be an important guest on Newsmax”

Don't ask if you don't want to hear their answer.
Patrick Byrne on Twitter,

Marc Elias Is the Democrat Perkins lawyer who spent 2020 getting election bureaucrats to change rules outside of state legislatures. But here, he filed on behalf of a candidate who lost, and he’s claiming precisely the vote tabulation errors that get one kicked off Twitter.

Also author of this long piece at Deep Capture, How DJT Lost the White House, Chapter 3: Crashing the White House (December 18-22). He pretty much blames Rudy for fucking up the response to the massive fraud.

But fraud is a different animal altogether. In the world of contract law, if the court concludes that one party was inveigled into the contract because the other party lied about fundamental facts, that contract is void ab initio. That is, it never came into being. The other way of stating this doctrine is that “fraud vitiates everything.”

Let me say that again: “Fraud vitiates everything.”

Why shouldn’t that doctrine apply to the most important agreement in America, which is the Constitution? Think about it this way: The Constitution is, in essence, an agreement between the American people and their government. It delineates the limited form that the government is to take and, in the Bill of Rights, states explicitly the powers that the government lacks. As the Declaration of Independence states, when the government fails to abide by its obligations (and limitations) the people can dissolve that agreement. Again, it's a contract.

When it comes to elections, the Constitution is predicated upon elected federal officials, including presidents, taking office honestly. If the agreement is breached through fraud in the elections, that fraud should vitiate an alleged president’s right to occupy the office he claims.

I’m not saying this is a winning argument but it’s an argument.

In response, Sarah Hoyt at Insty,  THANK YOU MUCHLY, BUT WE ALREADY KNEW: A data maven says fraud affected the election outcome.

1) We remember the impossible numbers in the middle of the night (those of us who were awake.)

2) Even if we didn’t, the courts’ refusal to let anyone present a case often on bizarre, spurious “standing” grounds, would be a red flag.

3) The democrats trying to shut up anyone who even mentions fraud is as good as an admission of guilt. What the innocent do, like say the Republicans after 2016, is make sure the opposition gets all possible opportunities to show what they think is evidence.

4) The military-occupied capital is totally what people who didn’t steal the election would do.

Ex-Republican Capt. Ed at Hot Air snickers Too Ironic To Check: Lin Wood Under Investigation In Georgia For Voter Fraud. It's beginning to look like he has mental issues.