The best news? From Breitbart, Rubio: ‘Possible’ We Have Senate Impeachment Vote by Sunday Morning

Yesterday, at the second shampeachment of President Donald J Trump, the defense got it's turn, and instead of using the full 16 hours or so allotted to them, as predicted, they went short; with a 3 hour presentation, refuting the House managers efforts to cast Trumps many rallies (and in particular the one on Jan. 6) as incitement to insurrection. You can see the whole thing at CTH, Defense Begins – Senate Impeachment Trial for Insurrection – Day Four, 12:00pm Livestream. Also as expected, the defense played many clips of Democrats also using "fighting words" in political speech, making the point that it's utter hypocrisy for Democrats to be basing these charges on those words. NYPo, Trump team trolls Democrats with clips of repeated vows to ‘fight’, Tyler O'Neil at PJ Media, Team Trump Exposes Democrat 'Incitement' in Hard-Hitting Video and 5 Must-Watch Moments From Team Trump's Impeachment Defense.   Althouse has the two minute version at A pithy montage of incitement hypocrisy. and a much longer 12 minute version at The Trump lawyers' "Fight" montage is devastating and — if you're not bent on getting Trump convicted — hilarious.. Via the Wombat's In The Mailbox: 02.12.21, The Fed: Trump Legal Team Obliterates Democrats’ Case With Videos Of Their Violent Rhetoric, also, Five Times Joe Biden Openly Urged Violence Against Political Opponents and  Michelle Malkin: Maxine Waters, Racial Insurrectionist If this were a real jury, composed on unbiased people this should have completely demolished the Democrat incitement to insurrection case. But it's the Senate. At Da Caller, Biden Predicts ‘Some Minds May Be Changed’ By Impeachment Managers’ Arguments. Seems unlikely.

After the defense rested, came the question and answer period, where questions for Senators (or often groups of Senators would pose leading questions to either the House Managers, the Defense team or both. AllahPundit was happy about that Question From Bernie Sanders For Trump Lawyer: Did Trump Win The Election? Irrelevant to incitement. Also, Question From Collins And Murkowski: When Did Trump Know Congress Was In Danger And What Did He Do About It? No investigation into that. Fox, Graham asks about what Pelosi knew prior to the Capitol riot, asked on Hannity, not in Senate.

WaEx, Impeachment Democrats admit ‘blue check’ Twitter mistake but deny manipulation charge. From Corteny O'Brien at Town Hall, Schoen Argues: Why Didn't the Democrats Release This 'Never-Before-Seen' Footage Before? "Shouldn't the subject of an impeachment trial, this impeachment trial, President Trump, have the right to see the so-called new evidence against him?" Well, if this was a REAL trial and not a show trial. The unsinkable Mollie Hemingway at Da Fed, New York Times’ Glenn Thrush Lies About Sen. Mike Lee’s Choice To Put Charity Above Politics In ‘Mulligan’ Remarks Lying liars and the lies they tell. The NYS, Impeaching the Voters

Yesterday ended with an illuminating moment, when Senator Mike Lee declared that he’d been misquoted by the prosecution. A befuddled Senator Leahy, the juror who is presiding over the trial, tried to sweep the matter aside with a procedural motion suggested to him by an aide. It turns out that the prosecutors were quoting a news story. So the matter was resolved with the prosecutors saying they’d strike the objected-to quotation.

Althouse, "The defense lawyers contended that Democrats were pursuing Mr. Trump out of personal and partisan animosity, using the word 'hatred' 15 times during their formal presentation...". Duh.
Jonathon Turley uses a football analogy to posit that Democrats are deliberately losing, What do impeachment and the Philadelphia Eagles have in common? They're 'tanking' Hoping for a better draft pick? WaPoo, ‘We have to move on’: Why Democrats decided to fast-track Trump’s second impeachment trial "Many Democrats have concluded that calling witnesses to the violence itself — such as law enforcement officers who battled the mob at the Capitol — could extend the trial indefinitely with little hope changing the outcome, given that 44 of 50 Republican senators voted Tuesday to question the constitutionality of the trial." Rooling Stoon,  America Needs to Hear From Mike Pence  JD Davidson at Da Fed, The ‘Sound And Fury’ Of Trump’s Impeachment Trial Signifies Something Sinister For America, "Trump isn’t really on trial here, everyone who voted for him is." At Da Caller, Sen. Josh Hawley Says Impeachment Is An Attempt To Delegitimize Half Of American Voters. Breitbart, Report: ‘At Least a Dozen’ Republican Senators Walked Out of Impeachment Trial 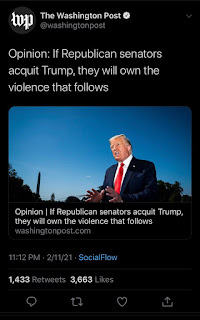 As I noted earlier this week: The left has now admitted they control antifa and BLM, and can dial up or dial down the violence and rioting and arson depending on their particular political needs in a week.

Given that, this is an ominous warning: ->

Meanwhile from the Slantic, David Frum whines, Trumpism Is Violence

Politico wishcasts, Impeach an Ex-President? The Founders Were Clear: That’s How They Wanted It. So clear they didn't add it to the Constitution. A more nuanced view from Josh Blackmun at Volokh, New Evidence and Arguments About the Scope of the Impeachment Disqualification Clause: A Response to the House of Representatives' Managers' Trial Memorandum. Blah, blah, blah. The Senates gonna do what the Senates gonna do, constitution be damned.
At Da Week Bonnie Kristian claims Impeachment isn't what will hurt Trump most. Trying to find further excuses for harassment. Anybody remember that Bill Clinton was disbarred for lying to the court? I didn't think so. Joseph Klein at Front Page, Dems’ Next Plot Against Trump. A Bill of Attainder based on a post civil war law banning former Confederates from office. On da Hill, Alexander Bolton thinks that Even with acquittal, GOP sees trial ending Trump's shot at future office. I tend to agree. He's done that, and he'll move on, but the people he has brought to the party will only stay if the GOP recognizes their importance. I don't think George Will sees that. WaPoo, Will Senate Republicans allow their louts to rule the party? Allah Pundit crows, Senate Republicans: This Trial Is Going To Finish Trump Off Politically Even If We Acquit Him. Matthew Walter at Da Week on The NeverTrump third party delusion. Two small parties are never strong than one big party.
Nikki Haley has clear made it clear she intends to run in 2024 on reforming the Republican Party. From atop Da Hill, Nikki Haley breaks with Trump: 'We shouldn't have followed him'  Politico,  Nikki Haley’s Time for Choosing "The 2024 hopeful can’t decide who she wants to be—the leader of a post-Trump GOP or a “friend” to the president who tried to sabotage democracy.", AllahPundit, Nikki Haley: We Shouldn’t Have Followed Trump Down This Path And He Has No Future In Office and then Sundance, Establishment Favorite Nikki Haley Digs Knife Into President Trump’s Back – “we shouldn’t have followed him” Well, we've done worse before (McCain, eg), and probably will again sometime. We do need to bring back white women.
Regarding the Ted Cruz vs. Andrea Mitchell kerfuffle John Hinderacker at Power Line asks (rhetorically), How Dumb are Reporters (UPDATED).

This is all trivial, except for one fact: the politicians, reporters, writers, editors, “intellectuals,” college professors and so on who try to intimidate you with their claim to be smarter and more knowledgeable than you, are, with only occasional exceptions, frauds.

Everybody is ignorant about a lot of things, but reporters get an opportunity to show it off daily, and many of them take it.
And even more at the Wombat's In The Mailbox: 02.12.21.
Posted by Fritz at 11:03 AM