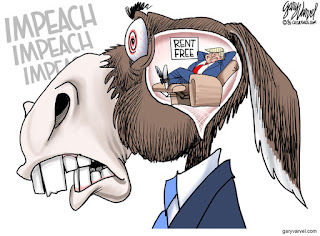 Before we get to the exciting part of today's news, the cancelling of Rep. Marjorie Taylor Greene, a bit of Shampeachment 2.0 doings to cover. At Town Hall, Jacob Sullun admits The Constitutionality of Trump's Impeachment Trial Is Not 'Crystal Clear' Ya think? Nothing is clear until the Supreme Court speaks 5-4, and since it's not likely to get that far, it will remain dubious. Normy Eisen and Kathy Reisner at USA Today insist Whatever legal or constitutional test you apply, Trump incited the violent Capitol attack. Now do Chuck Schumer. 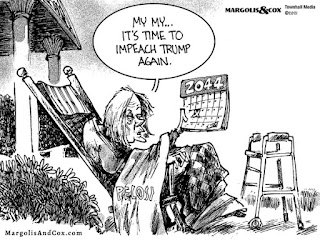 The House, well, the House Dems To Trump: We’d Like You To Testify At The Impeachment Trial; Update: No Thanks, Says Trump Lawyer (AllahPundit at Hot Air). GFY. Ace, Trump Letter to Fake Impeachment Mangers: "We are in receipt of your latest public relations stunt."


The Fake Impeachment Mangers -- including Eric Swalwell, who was adulterously fornicating with a Chinese spy while serving on the House Intelligence Committee -- delivered a demand that Trump testify under oath, so they can use Jim Comey rules to prosecute him for non-lies.

They declared that his refusal to do so would give rise to a "negative inference" about his claims of innocence.

Trump wrote back, properly, "Go fuck yourselves, and tell Swalwell to wipe the Chinese Spy off of his dick."

Along those GFY lines, Fox, Trump resigns from Screen Actors Guild: ‘I no longer wish to be associated with your union’. Althouse, "I write to you today regarding the so-called Disciplinary Committee hearing aimed at revoking my union membership. Who cares!", Sundance at CTH, President Trump Responds to Screen Actors Guild Ridiculous Investigation. 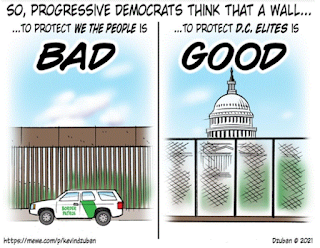 
Journalists who actually bothered to check the facts — there are precious few of those in D.C. nowadays — pointed out that Ocasio-Cortez’s office is not in the Capitol building, which was stormed by a mob of Trump supporters Jan. 6. Instead, her office is in the Cannon House Office Building, on the south side of Independence Avenue, across from the Capitol. None of the rioters ever entered the building where AOC was in her office, cowering in her bathroom and allegedly fearing for her life.

Democrats generally have lied about the Capitol riot, in which a relatively small number of angry nutjobs breached the police barricades, allowing a somewhat larger number of pro-Trump protesters to enter the Capitol, where they mostly wandered around taking selfies, like tourists. Democrats expect us to believe that this incident was a “terrorist attack” comparable to Sept. 11, 2001, and AOC’s “I thought I was going to die” sob story was clearly intended to dramatize that narrative.

TNP,  AOC’s “Big Lie.”. Matt Vespa at Town Hall Fact Checks the Left: Did Ocasio-Cortez Mislead the Public About Her Location During Capitol Hill Riot? In short, yes, watch out for her, she's a slippery bitch. PM, AOC attacks Republican colleague who set the record straight about her location during Jan. 6 riot and AOC instructs supporters to report 'misleading' information after she was busted spreading falsehoods on social media because of course she does.

Jenny Cudd has been charged with two misdemeanor offenses and is on pretrial release. She doesn’t just want to continue on with her plans to take her staff for a bonding-oriented retreat, she booked the retreat in Riviera Maya, Mexico. She wants permission to leave the country. She, her staff, and their spouses are scheduled for a long weekend in Mexico from February 18 through February 21. Cudd doesn’t want to lose the money she has already spent on the arrangements.

Insty, THAT’S DIFFERENT BECAUSE SHUT UP . . .

Hillary Clinton radicalized and incited violence among Americans, while delegitimizing our political system and undermining it with Russian disinformation. She should be retroactively impeached. That’s how this works, right?

Of course, the "big" story of the day is the forced removal of GA Rep. Marjorie Taylor Green from her committee assignments in Congress, because of stupid things she said (some of which she didn't actually say) prior to being elected to Congress. Althouse,  "Rep. Marjorie Taylor Greene (R-Ga.) apologized for her past controversial remarks and embrace of the QAnon conspiracy theory.... Greene told her colleagues that she made a mistake by being curious about 'Q'...."

Freezing and focusing on Marjorie Taylor Greene is not going to save us. And by the way, isn't this whole MTG kerfuffle about saving Liz Cheney? You need a prisoner to do a prisoner exchange.

ANOTHER UPDATE (FROM GLENN): As long as AOC’s lies are excused and rewarded, color me unimpressed. This has nothing to do with standing up for standards, which no longer exist except as flags of convenience.

Wow, all the benefits of being a Congresswoman and not of the responsibilities? What's not to like?

Mediate cited by Hot Air whines McCarthy Now Pretending That He Doesn’t Know What QAnon Is. QAnon = Emmanuel Goldstein. I hope Republicans are taking notes, and take revenge several fold over if they capture the House in 2022. Take out the squad to start, and then Nancy just to ram the point home.

The Republican Party is not the party of QAnon, Holocaust denial, or white supremacy. It is in no danger of becoming that party.

The claim that the GOP may be veering in that direction is a Democrat/mainstream media talking point. Cheney should not be espousing it.

AllahPundit, Ben Sasse To Nebraska GOP: Frankly, I Don’t Care If You Censure Me For Not Being Part Of The Trump Cult "Golly, this guy certainly did locate his balls after he won his primary."

From Zero Hedge, Libertarian "Domestic Terrorists"? Are you now, or have you ever been a libertarian?

Authored by Ron Paul via The Ron Paul Institute for Peace & Prosperity,

The Department of Homeland Security issued on Wednesday a nationwide terror alert lasting until April 30.

The alert warns of potential terrorist attacks from Americans who are “ideologically motivated” and have “objections to the exercise of government authority and the presidential transition, as well as other perceived grievances fueled by false narratives.” . . .

As Ace reminds us, cOrPoRaTiOnS aRe OuR fReNz. Sundance, Tucker Carlson Reveals Bank of America Notifying Feds of Customer Purchase History to Use Targeting Capitol Hill Protestors Have you ever attended a Trump Rally? Your credit history may be at risk.

According to Tucker Carlson’s reporting one Bank of America was customer was targeted, interrogated and released after nothing was discovered.  However, this type of exploitation should serve as a warning to Americans…. There is a big brother, and that system can/will be weaponized by government if/when an ideological administration is in power.

Amanda Ensing is a pro-Trump, conservative, Christian beauty influencer and vlogger. She is in the news for posts made after the Capitol Hill riot. Following a disagreement with her choice of public opinions, Sephora has severed its ties with her.

Online activists pushed back on Ensing’s collaboration with Sephora and began talk of a boycott. Ensing has been a vlogger for nine years. She has 1.4 million subscribers on YouTube and Instagram. As an influencer, she also has relationships with a number of brands lining up to get a piece of her followers’ support. After the 2020 presidential election, Ensing posted a video explaining her conservative political views. She told her audience she votes on policy and according to her Christian faith. And, she announced her support for Donald Trump.

I'd boycott Sephora, but I already am.

At Fox, John Fund says Change how we conduct elections — undecided NY congressional race shows what’s wrong and at Town Hall, Kay Cole Jones pleads Don’t Turn 2020’s Election Problems into Law, which is precisely what Democrats intend to do, because it worked out for them. From JTN, GOP state senators sponsor resolution to declare Maricopa County Board of Supervisors in contempt "for not complying with subpoenas pertaining to equipment, ballots and more related to the 2020 election."